There was a chill bite to the air that said winter was fast approaching, the leaves painted bright, tumbling on the breeze. But the sun was still warm and honey-sweet, and Kennedy had nothing to occupy her afternoon. She could just lounge on the settee on the patio and watch her new husband rake up those leaves.

Of course, being the only doctor in Shadowcrest meant that the peace and quiet she was currently enjoying could be shattered at any minute, accident, trouble with Hope, Heidi or Victoria going into labor early… Though Victoria swore she couldn’t be more than six months along, she certainly seemed further. She was already nearly as big as Heidi and Heidi was due within the month. 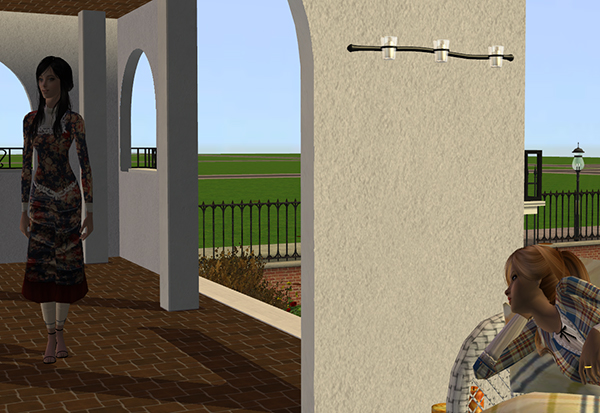 “And Sawyer swears you don’t know how to relax.” A familiar-and welcomed-voice said from the shadows of the porch.

“If he could stay out of trouble, I wouldn’t have to run him so hard or often.” Kennedy pushed herself up as Tiffany stepped into the sunlight. The other woman nodded and smiled as Kennedy patted the cushion.

“So, obviously I’m not interrupting anything.” 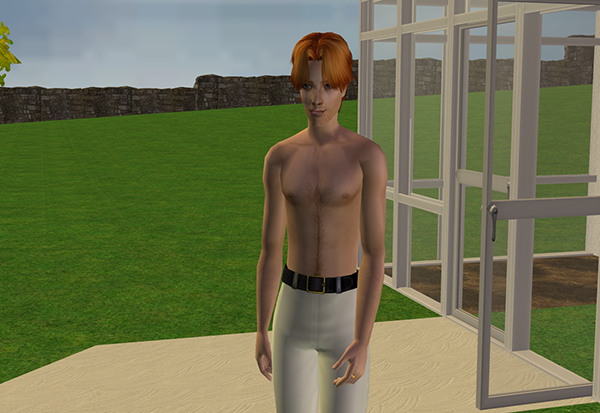 “Nope. Just enjoying the view.” Tiffany’s eyebrow rose slightly taking in the meadow around the house and the forest beyond. You couldn’t quite see lake Haven from here. Kennedy grinned as Emanuel came out of the garden shed/greenhouse–kinda ingenious that idea of Tiffany’s to put the shed right up against the back of the greenhouse–bare chested.

“Ah.” Tiffany mouthed, flashing Kennedy a grin, though it faded perhaps a shade too quickly.

“Oh, but it gets better.” Kennedy grinned hoping that it would cover any flash of sympathy that might have darted across Kennedy’s face. Kennedy wasn’t a huge believer in the Leave it to Beaver picket fence, what was so called “normal” was not necessarily a virtue. It denoted a lack of courage to follow one’s own path, as far as Kennedy was concerned. But, still, it was hard to be left behind. 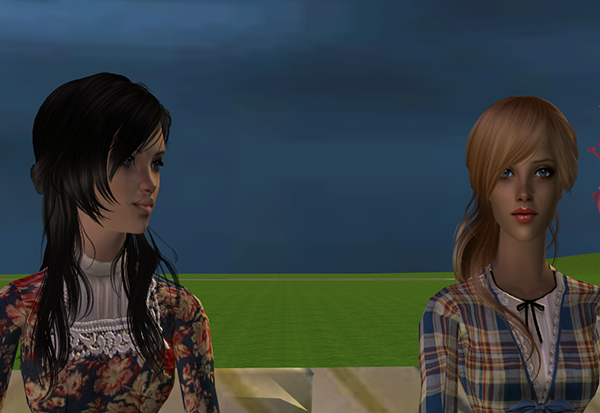 And Kennedy knew that Tiff felt left behind. Everyone had partnered up like lovebirds, except Tiffany and Olivia. Being single didn’t seem to bother Olivia, not that she and Kennedy had spent all that much time talking. Still, Olivia seemed more bothered if anything, by the lack of sex aspect of being single than the lack of a Romeo pining away for her.

“Romeo was too Emo,” Olivia had said at the wedding reception after Fiona, Zahrah, Jennica and Victoria had gotten into a debate over Shakespearean “heroes”. The former two had sworn that Romeo was the be-all and end all, and the latter two, who’d probably actually read some Shakespeare outside of grade nine Literature class, couldn’t have disagreed more. “I’d betcha anything he’d have either gone off like a rocket as soon as things got heavy or he’d have been one of those jackasses who is paying attention to anything but the business at hand. I’ve known a couple of those, they tend to wax poetically about the carpet matching the drapes, and every bit of hinting that there are better thing he could use that so-clever tongue for would go unheeded.” She’d said with a laugh, knocking back a glass of–well, whatever she’d been drinking.

Sadly, it hadn’t just been the guys staring at her with gaping mouths. Only Kennedy, Tiffany, and Nessa hadn’t been looking at the blonde woman dazed (or confused), she and Tiff had been too busy laughing to gape and Nessa had her face buried in her crossed arms. “Give me somebody more like Edmund, from King Lear–granted dude was evil, but any guy who’s got two sisters killing each other to get with him, gotta have some bumpin’ skills. Or Richard III–think about it–despite a physical deformity of some kind, he was enough of a beast in the sack to get the widow of a dude he killed to agree to marry him while standing over her father-in-law’s body.” She’d continued blithely, as if not noticing the wide-eyed stares of those around her. “And Sir Ian’s portrayal of him, in the flick, I’m pretty sure melted some panties right off. Not bad for an old, gay dude.”

“Must everything be about sex to you, Olivia?” Phoebe had asked primly.

“Nah. I’m not into splooshing, so food really isn’t about sex with me.” Olivia’s tone had been bland as plain Wonder bread. And that had been a fun one, Kennedy was almost sure that Wesley’s face would have exploded from the surely painful rush of blood to it, as Olivia had calmly explained about just what splooshing was. 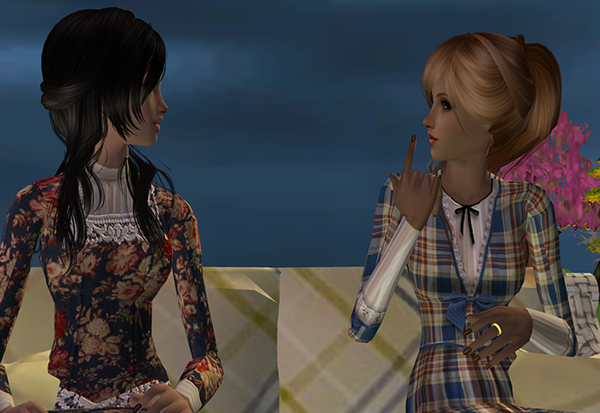 “What are you grinning about?” Tiffany asked, bringing Kennedy back to the here and now.

“Yeah, that was fun. I’d say I wonder what she’ll say at my wedding reception–except…” Tiffany trailed off and glanced off toward the grain silo in the distance. Kennedy took the moment to glance off toward Emanuel. 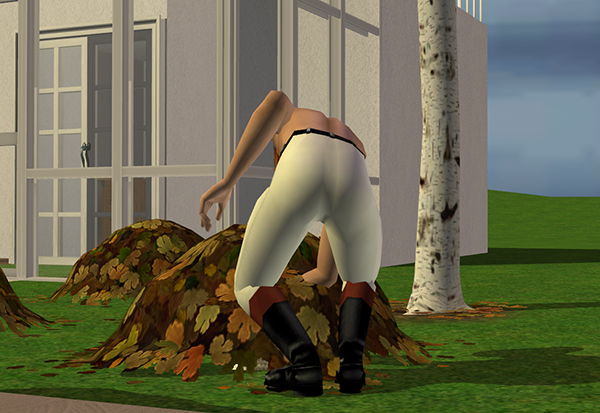 “Tiff, some day your prince will come. Don’t spend your winter hiatus planning the tower you’ll lock yourself up in.” Kennedy poked her shoulder.

“Or I’ll just get tired of waiting and marry Gray.”

“That’s a match made in someplace other than Heaven.” Kennedy commented dryly, to her nails. “You don’t have to go there just cause everyone else is getting married.”

“It’s better than Alistair isn’t it?”

“Marginally, though you would never marry Alistair.” Kennedy said. Though they’d never talked about it, she was pretty sure that Tiffany knew what happened to Tate, and shared Kennedy’s slow-burning hatred for the jackass.

“Well, I can’t imagine wanting to but…” She looked down at her hands. 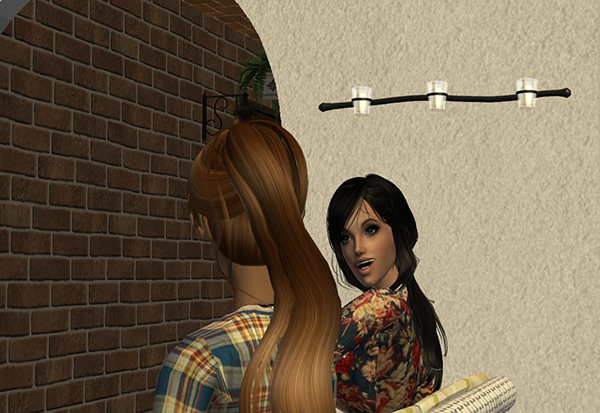 “No, seriously. Not happening. Not never. I’ll sneak into his house and perform gender reassignment surgery on the bastard before you marry him just to have a husband and some babies.” Kennedy told her, startling a laugh out of Tiffany.

“Well, we’re supposed to be getting some imports soon–don’t give up hope.” Kennedy said. “I mean, we’re here–stranger things have happened.”

“Dinner’s ready.” Emanuel’s head popped out of the patio door before Kennedy had any idea how to pull Tiff out of her funk. What good, really, were the options of a hundred thousand gold coins when you had your heart set on one particular nickle? 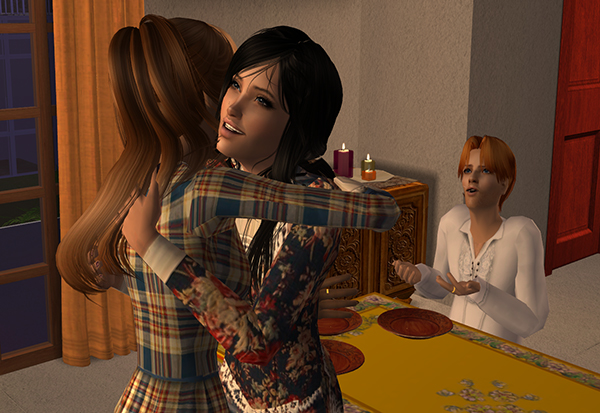 Still, by the time Tiffany left after dinner, she almost seemed back to her old self. 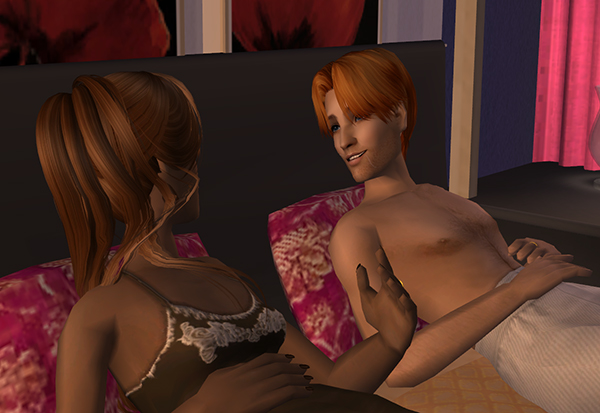 “Is something wrong with Tiffany?” Emanuel asked as they settled on the bed later that night.

“Crush. And as Jim Baker so wisely said about crushes in Sixteen Candles “If they were easy, they’d call ‘em something else.”.” Kennedy sighed and shook her head. 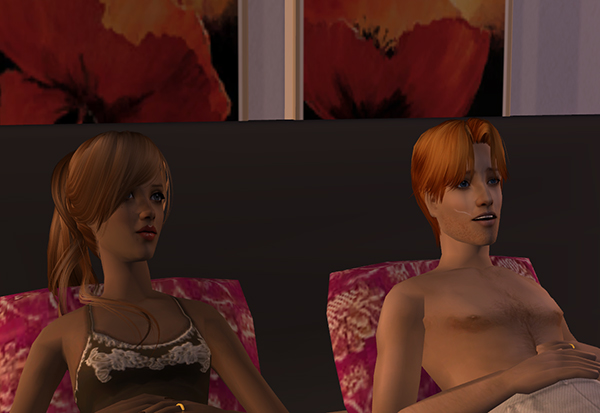 “It’s not so easy as that, Emanuel. She likes somebody–but she also wants the whole–thing.” Emanuel looked at her blankly. “She wants a family. I dunno that she’s got a complete case of baby rabies or thinks she’ll die if she doesn’t have a man. That’s not Tiff. I think, if you really come down to it, she wants some place to call home. Not just a house. Some place, with people she loves, where she belongs.”

Emanuel absorbed that in a long moment of silence. “Kennedy?”

“Have–have you given any more thought to what we–talked about.” Wha–Oh, right. First comes love, then comes marriage, then comes the baby carriage. Kennedy bit back another sigh. 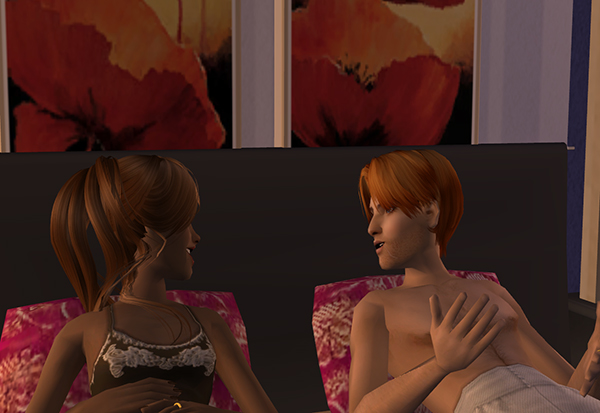 “I still don’t think right now is the best time for it.” She watched Emanuel’s face, but other than the light going out in his eyes, his expression didn’t change. There was something more there than he was telling her, but damned if she knew what it was. But a quick rack of her brains turned up nothing that she’d be willing to pin down.

Did he think it was something about him? She’d been absolutely truthful when he’d brought it up. In a country with one doctor and six couples who hadn’t been married a year, at least two babies on the way, and two–possibly three–couples who could get married before the year was out, though if you counted Alistair and Zahrah, there were possibly four. But Kennedy didn’t count Alistair and Zahrah, she refused to believe that the girl was that hare-brained. She would wake up before she hitched herself to that wagon–it was a bad time for the only doctor in that country to be pregnant.

But would Emanuel see that as the truth, the whole truth? She glanced to her left but Emanuel didn’t seem to be paying her any mind. He slid under the covers, pulling them up over his bare shoulders and turned on his side. Back–none too subtly–toward her. 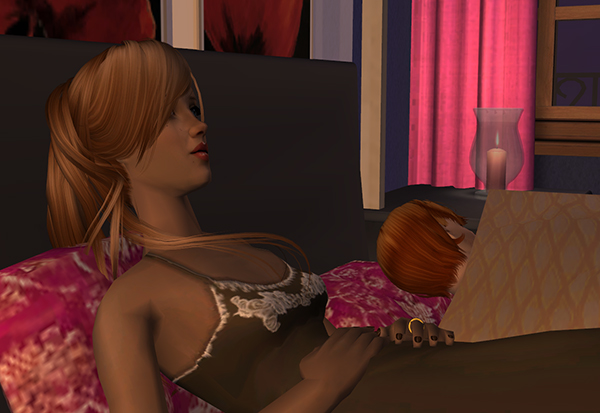 “You gonna be awake much longer? I should be in early tomorrow so I can finish up drying the herbs I harvested today.”

“Not too much longer.” Kennedy said. He blew out the candle on his side of the bed, leaving Kennedy with nothing but her thoughts. How very typical. Tiff wants to be with the guy she wants, to be married, to be starting a family–or at least she thinks she does. And here I have to explain to my incredibly hot husband, who I love, but it’s complicated, why we shouldn’t be having a family yet.

And try and convince him that the decision didn’t have anything to do with him. 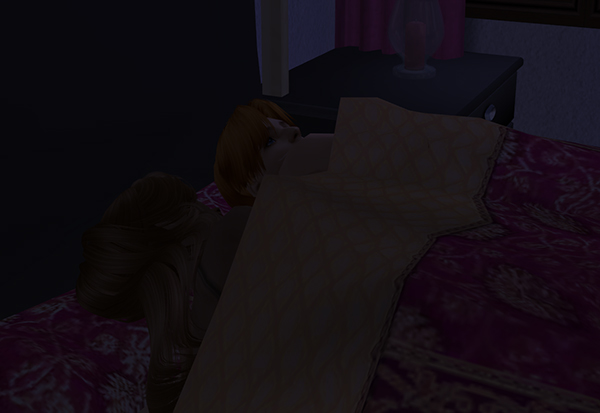 She leaned over to blow out the candle on her side of the bed, before sliding under the covers. Her hand was tentative as it touched Emanuel’s shoulder, as she slid cautiously closer, he didn’t say anything, but he at least softened the blow by glancing at her over his shoulder and relaxing his back into the front of her.

The last time they’d talked about this, they’d gone to bed angry and he’d lain so stiffly in bed, she’d finally given up and slept on the settee out on the patio. Maybe there’s hope for us yet, she thought as his fingers twined about hers.

7 Responses to What You Want