I’ve Got My Angel Now

“There must be something in the water ’round here.” Peyton commented, tipping her face up slightly to enjoy the warm sun, after the better part of ten days of cold, cold rain it was nice to have sun again. Well, they’d had sun yesterday but it wasn’t a day for taking walks, it was a day for waiting for the mud to solidify up a little. 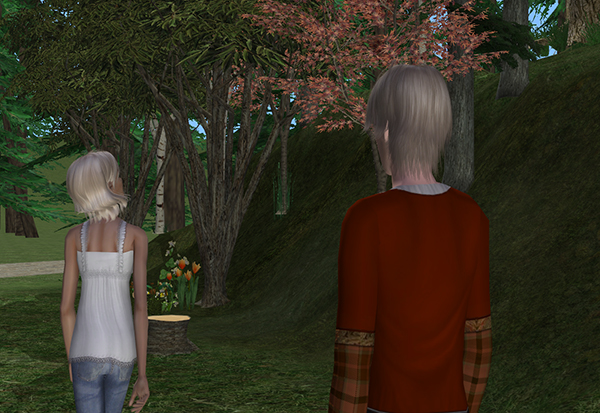 “Um, what sort of something?” Ren asked, his brown eyes puzzled.

“Well, last night, Joey comes home looking like someone just passed a mandate forever banning the rom-com.” Peyton began, then shot Ren a glance and shook her head. “Bewildered, I guess, like she couldn’t believe that something had happened.”

“Apparently, our dear musical Romeo asked her if she’d ever think about marrying him.” Peyton said.

“Oh.” Peyton tapped him on the nose. 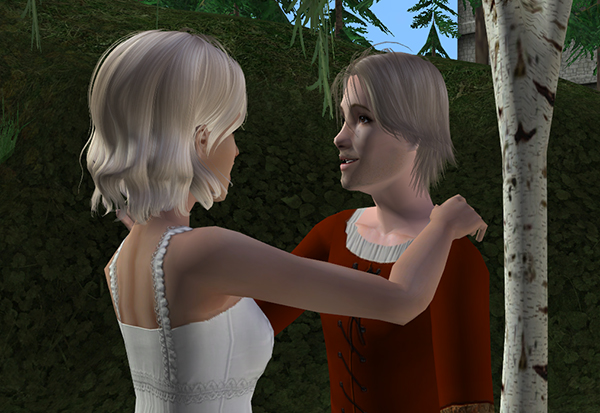 “You said that already.” He smiled and held her hands in his, not seeming to notice that she still had clay under her fingernails. Maybe he didn’t notice. She somewhere along the line had stopped noticing the work roughened texture of his hands, too caught up in the strength and warmth of them. Kind of amazing. “I don’t think he asked her to marry him, just if she ever would marry him.”

“What does that have to do with the water?” He prompted, after her left hand escaped his grasp and brushed the long strands of white blonde hair off his forehead.

“In and of itself, nothing. It’s just not long before that I ‘caught’ Vikki and Camden making out like teenagers under the oak tree.”

“Camden is a teenager.”

“Yeah, yeah, I know. But Vikki isn’t.” Peyton shrugged. He mouthed one of those “I have no idea what you’re talking about, but please keep talking” sounds he seemed to make at her frequently. “It just got me thinking, what is it with your young men and falling hard and fast?” 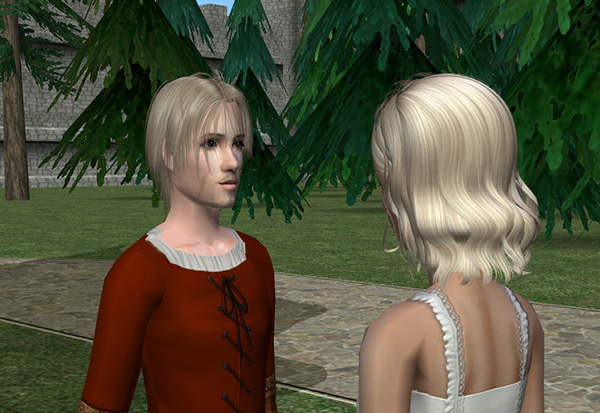 “Maybe it’s a limited population thing.” Peyton thought for a moment. “I mean there are only thirteen of you, there are only going to be maybe that many of us. But still, I could see them being as eager as anyone for the, you know, random roll in the hay. Not so much for putting a ring on it.”

“Maybe they just have confidence that we older gents lack.” Ren said after a moment.

“Well, maybe.” She cocked her head to the side and willed Ren to keep talking. The blacksmith had really good insights into people, but getting those insights out of his head was not so easy.

“They’ve had less time to build up doubts and concerns, they can pour their whole hearts into things where we tend to dither or lose our courage.” Ren shrugged his broad shoulders. 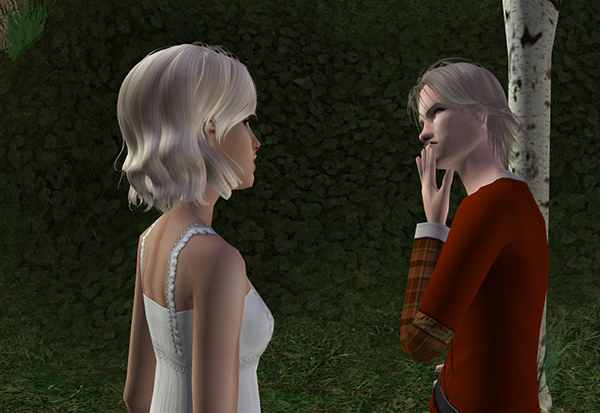 “Yeah, I guess. Less baggage.” Peyton nodded. “Still you do realize that you guys might have less time though, right? I mean for all that Charlie Chaplin was still having babies when he was in his seventies–well his wife was having babies, he was just putting them there. But, still, I mean if Jarrett were ever going to get remarried, he’d have years less time to go about the busy of providing wee Crestians than say Sawyer would, wouldn’t he?”

“He will.” Peyton blinked.

“I think I missed something.”

“Jarrett, he does intend to remarry.” Ren said.

“He believes it’s his duty.” For a man whose job was whacking the shit out of metal with a big-ass hammer he sure could put things a little too subtly and delicately for her sometimes. Oh well, best to blunder ahead anyway, that was her job, chewing leather clad foot. 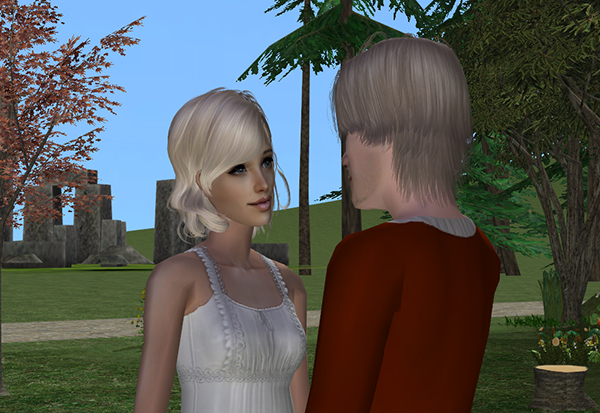 “No one would blame him if he didn’t, though.” Peyton said. “I mean considering all the shit he’s gone through, psh, I don’t think there’s a single one of us who wouldn’t understand. Does the king know?”

“Aye. That’s how I know. We had many talks about it before the king told us about his intended plans. The king offered Jarrett an exemption, but he insisted.” Ren told his hands.

“Jeez. He’s a better man than I am.” Ren ducked his head, but not fast enough cause she could see the flush on his neck and his ears. “Person sort of man, I’d call you a lech, but I kinda like the fact that you notice.” He went even redder.

“It’s not so hard.” Ren finally stammered out. 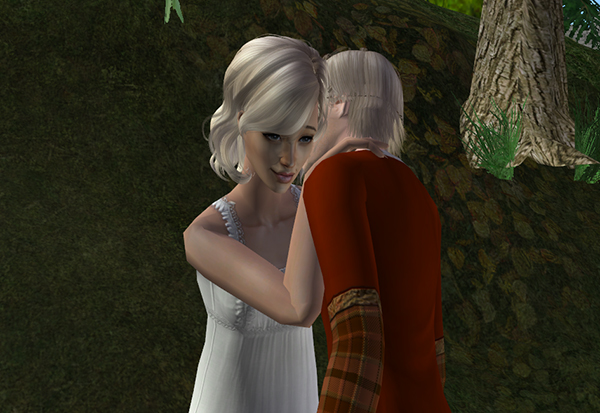 “Well, I would say if your mother were ever right about anything as far as you were concerned, it was come to by complete and total accident.” He tucked her hair behind her ear, fingers skating down her jaw, leaving tingles in their wake. 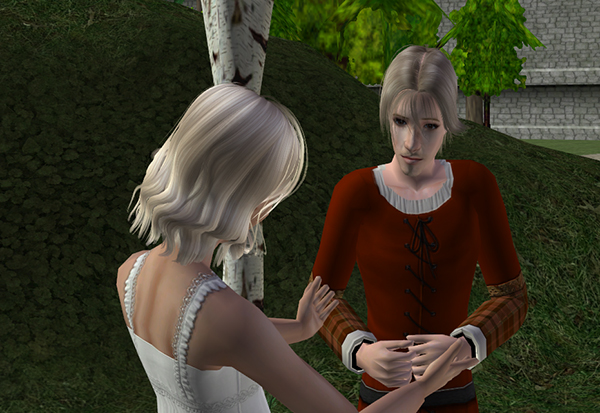 “Thanks.” For once she was the one ducking her head and speaking toward her hands. “So, who do you think the next one of us to get married will be?” Peyton asked after a moment.

“I thought you were the blacksmith, aren’t you the one who makes all the metal stuff? Doesn’t everyone come to you to get rings made.”

“I’m better with horseshoes than jewelry.” Ren said looking at his fingers.

“Liar. I saw that necklace you made for Raquel.” Peyton said.

“Well, also, with the nobles, they may have heirloom jewelry.” Ren pointed out. “Which they might use to propose with too.” 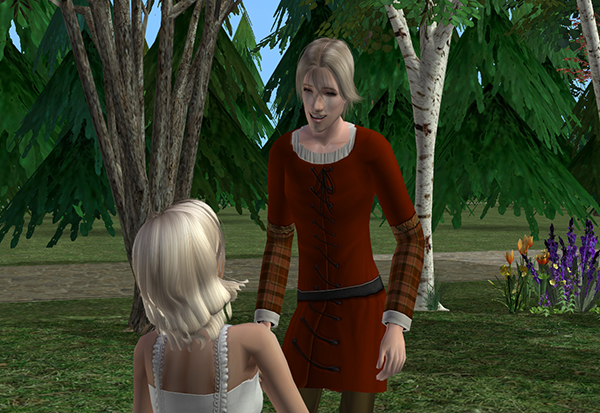 “You take the fun out of trying to guess, though I know who I hope is getting married next.” Peyton said. Ren cocked his head to the side. Even though she’d practiced, it was just slightly easier to be confident with a tree stump stand in. She went to her knee, pulling the jewelry box out of her pocket. “I hope it’s us. Ren, will you marry me?” 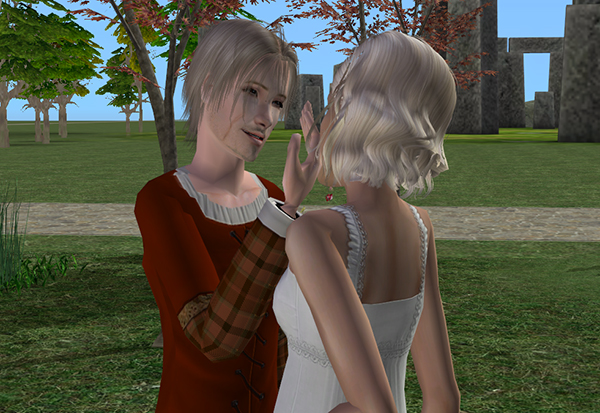 His hand pressed against his chest, his brown eyes huge for a long moment. His hands shook as they took the ring from the box in Peyton’s hands. The next few moments seemed to blur together, clearing with her face tucked against Ren’s neck, arms wrapped tightly around him and his arms wrapped tightly around her. He released her wiping the tears off her cheeks that she didn’t even know she cried.

“You know,” he dug in his belt pouch and pulled something out. “I’ve been carrying this for weeks.” She held her hands out and he dropped a beautiful gold ring into her palm. “I just didn’t have the courage to ask. I’m glad you did.”

“And you,” she sniffled. “Said you didn’t have talent with jewelry.” 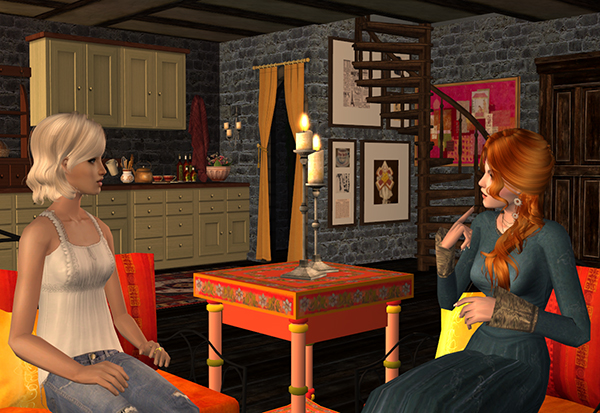 “You look very pleased with yourself.” Victoria said when Peyton came into the barn that afternoon.

“As well I should be.” She smiled and flopped on the sofa.

“Let’s just say blonde hair and a fondness for the sound of my voice aren’t the only things that  I have in common with a certain merchant.” Peyton said.

“Damn, there’s only one blonde merchant, so I can’t even pretend I don’t know who you’re talking about.” Victoria grinned. “So what, did he propose?”

“No, well, kinda. I tipped it off. Got the ball rolling.”

7 Responses to I’ve Got My Angel Now