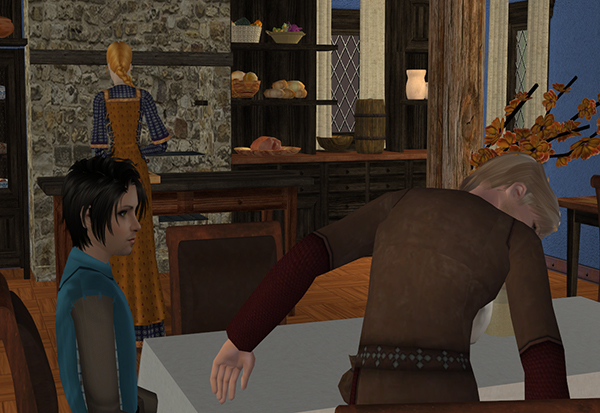 “When I said that I wanted you to come over and help me with that pasture fence, Sawyer, I didn’t mean you couldn’t eat breakfast first. Especially as we may not even get out to do it, if it doesn’t stop thundering.” Jarrett said to Sawyer. “We haven’t even eaten yet, and I know we’re up before M’lord ever deems to step a foot out of bed.”

“Oh, am I in time for breakfast?” The teenager sounded hopeful. 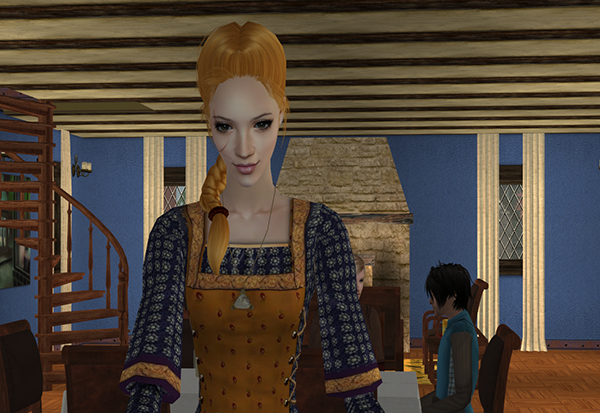 “Would you like some breakfast, Sawyer?” Nessa asked, already adding more fruit to the pile to be sliced.

“Aye! Er, please, if it’s not any inconvenience, Lady Nessa.” He added the last bit sounding a bit shamefaced.

“Did I miss something?” Jarrett asked.

“I’m fairly certain that Sawyer came over before breakfast because he was hoping to join us for breakfast.” Nessa said. “In case you hadn’t noticed, he’s here for breakfast every morning I’m supposed to be cooking it.” There was the sound of a shoe scuffing against the floor. Ah the sounds of a teenager finding out that he was not as clever as he thought he was. Nessa smiled to herself.

It was amazing how much she was doing that! The first few times that she had smiled for no reason other than enjoying herself or the company of people around her, she hadn’t been able to stop herself from reaching up to touch her mouth, it had felt so odd for her face to move that way. 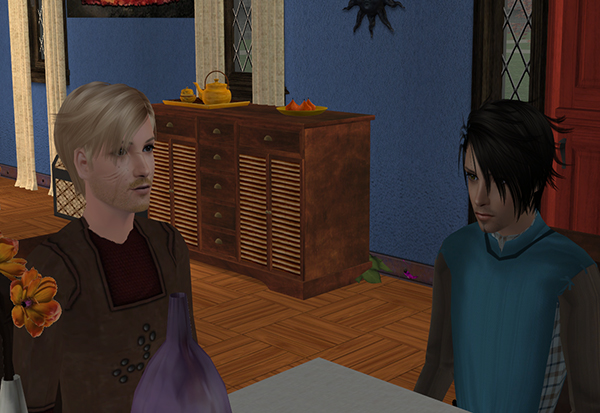 “Oh, and why don’t you ever come when it’s my turn to be cooking?” Jarrett asked, that mild teasing tone in his voice that it took often with Sawyer. He had a whole catalog of different tones with Sawyer, Nessa sometimes wondered if either of them knew about it. There was no way to ask without potentially embarrassing them both and men could be so touchy about showing affection to each other.

“Well,” Sawyer admitted to the table. “While your porridge is better than Alistair’s, it’s still porridge. And it’s always porridge, the only thing to change is what you stir into it. Lady Nessa never makes the same breakfast twice in a week.”

“An’ I can get porridge at home without having to get up early to be over here with the birds.” Sawyer’s shoes scuffed again on the floor. “Maybe you should get Lady Nessa to teach you to cook something other than porridge.”

“So you can come for breakfast everyday? What happened to being here with the birds?” Jarrett asked. “Next thing I know, you’ll be asking us to start sleeping later.” 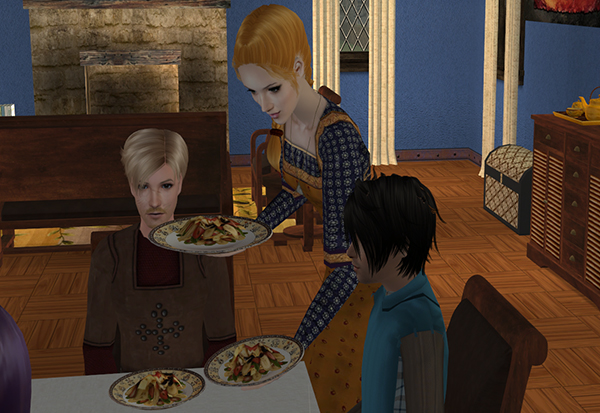 “Nah, I know that’s not happening–Is that that spiced fruit salad.” Sawyer asked as Nessa laid the plates down in front of them.

“Awesome.” Nessa corrected before sitting down with her own plat of fruit salad. Sawyer wasted no time in tucking into the fruit salad, and as such, he was finished with his portion before Nessa and Jarrett had  gotten a quarter into their portions.

“Did you even taste it?” Jarrett asked.

“Aye, and it was wonderful, Lady Nessa.” Sawyer smiled that disarming smile at her.

“Maybe I should ask you to teach M’lord to cook.” Sawyer mused.

“But do we really want to trust that man with a knife?” Nessa asked blandly. “I don’t really want to be in the same room with him and any item that requires trust.”

“Well, lad, seeing as you’re done already, we could use some more firewood from the dry pile out back.” Jarrett suggested with an eyebrow up.

“Aye, Jarrett.” Sawyer picked up his plate and fork and went to the sink to wash them both. 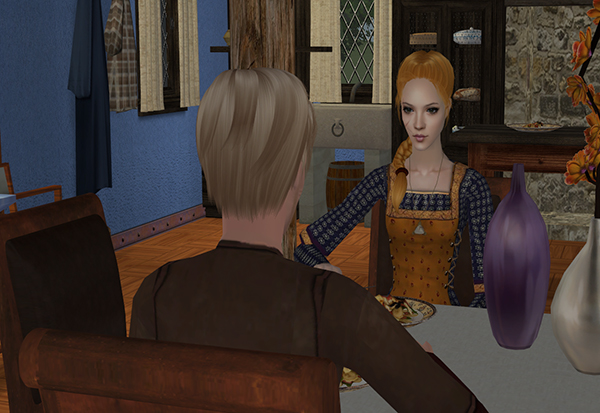 “Well, for pushy teenaged guests who eat you out of house and home, at least he’s a polite one.” Nessa commented as she saw his black spikes of hair heading down the back stairs.

“Aye. He’s a good kid.” Jarrett agreed. Nessa nodded and turned her attention to her fruit salad. The only sound then being the immediate sounds of eating and the less immediate sound of rain splatting on the windows with a distant underscore of snarling thunder.

She noticed gold light playing through the windows, bathing the house in a warmer than sunlight glow. 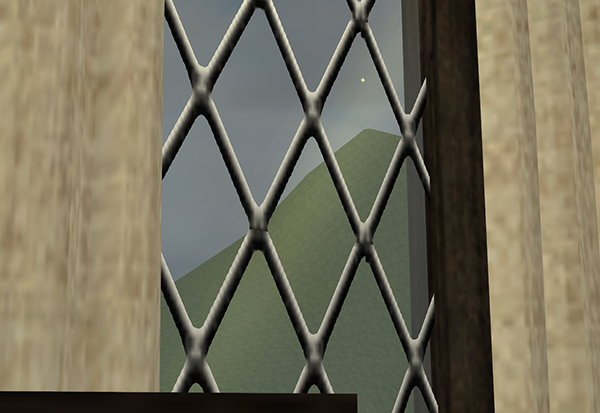 “What the f…?” Nessa murmured, then cut herself off with a gasp and held very still as she heard Jarrett turn. Her heart hammered in her chest.

“Nessa?” Jarrett asked, sounding concerned, not angry as she tried to will herself into remembering how she breathed. Mitch had hated it when she swore. Oh, he could cuss out a nun, but if she said “shit” instead of “sugar” when she stubbed her toe…

“What’s that?” She asked, pointed at the undulating golden light.

“Oh, I–uh I dunno.” Jarrett said, turning back toward the sink to peer out the window. Nessa buried her face in her hands and told her body that it did not need to pump out any more adrenaline, thank you very much. She had enough to last her until after lunch at best. “I think it’s something King Lachlan did.”

“Because he’s coming up the walk now?”

“Oh, sugar!” She scrambled to her feet, feeling the dress get caught around her feet and legs. There were days when she wished that she were more like Peyton in her ability to keep to a conviction. But–well–she just wasn’t. Mitch had harped about how she looked like a man too much anyway. Too tall, too lanky, too few of those womanly curves. When both men and women wore jeans, it didn’t matter if she wore jeans too, but here, women wore dresses. Her need to conform overrode her desire to be comfortable and move.

Nessa took a moment to smooth her skirts–and not so incidentally wipe the sweat off her palms–before calling up a smile and opening the door. Following in the wake of Lachlan was a blonde woman with a ready smile and quizzical eyes.

“Good morning, Lady Nessa.” King Lachlan said, his lips curling up into that soft smile of his. “Sorry to call so early.” 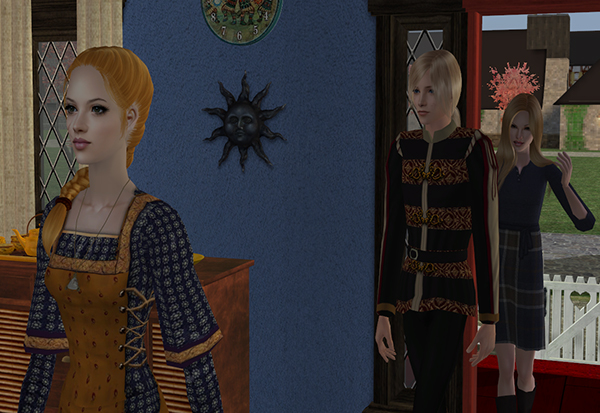 “Heyla, Jarrett, rain’s stopped. You wanna go get to that fence before it starts raining again?” Sawyer called from the back door before Lachlan could introduce the blonde.

“Aye. If, if that’s not a problem, your majesty.” Jarrett looked at the king–or more at the king’s kneecaps. He never seemed to meet the king’s eyes, which Nessa wondered briefly why was. The king certainly wasn’t an intimidating man. But then again, Tate didn’t either. Maybe it was a class thing.

“No, go ahead, though it shouldn’t rain for a while. I don’t mind the occasional spring shower, they’re good for the crops, but we’ve been getting a bit too many spring showers. I just directed this one off toward a forest area that could use it.” The king smiled. “I just brought Lady Olivia by wondering if–as Lady’s Kennedy’s barn is a bit crowded at the moment, we could use your spare bedroom.” 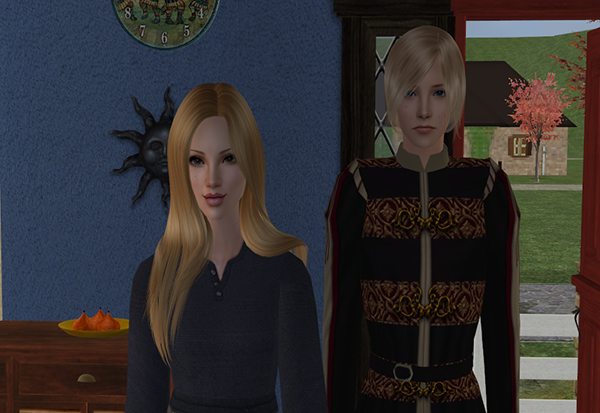 “I could move back to the other barn, your majesty, if you need more room.” Sawyer volunteered.

“No, I don’t think that’ll be necessary, Sawyer, though thank you. As Lady Tiffany pointed out there are spare rooms in all of the cottages, save Master Blake’s. If we make use of those spare rooms, then we’ll have plenty of space.” Lachlan said.

“That’s fine, you’re welcome to our spare room–if-if that’s okay with Jarrett of course…” Nessa said, before her eyes slid to Jarrett. He hadn’t blown up at her yet, but if there was one thing guaranteed to set Mitch off, it had been ‘emasculating him’ in front of other men, usually by making a decision without consulting him.

“That’s fine with me as well.” Jarrett said with a smile.

“Welcome to Shadowcrest, Lady Olivia.” Sawyer bowed formally over her hand. She smiled and swatted him on the arm.

“Lady Olivia, your majesty.” Jarrett said with a crooked little smile, inclining his head to Olivia and bowing lowly to the king. “So tell me,” Jarrett murmured as they moved past the King toward the open door. “Did you volunteer to move back to the barn just to get away from Alistair?”

“Wouldn’t you?” Sawyer said blandly. Jarrett’s response was too low for Nessa to make out, but he nudged the teenager with his elbow his face somewhat stern.

“Nice?” Sawyer responded. “If you put all the times Alistair’s been less than a git to the both of us together, you still wouldn’t have accumulated a half second of ‘nice’.” Nessa lifted her hands to cover her mouth. Partially because she could agree. 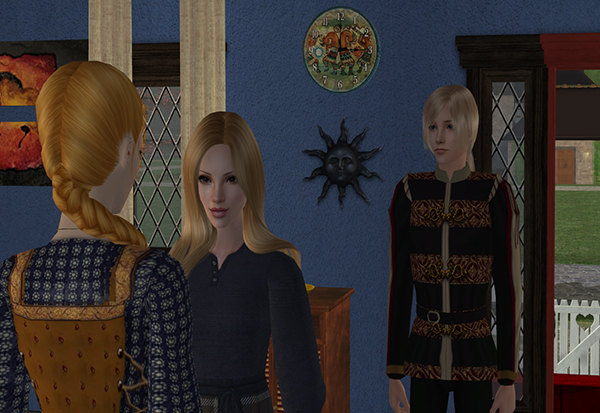 Not long after, Lachlan tendered his regrets at having to leave and headed off to his previously scheduled kingly duties or whatever he did. The two women tended the garden in comfortable silence, then Nessa did the laundry leaving Olivia to wish outloud for a laundromat.

A hundred chores took the two of them to midafternoon. “So, what’s for dinner?” Olivia asked. 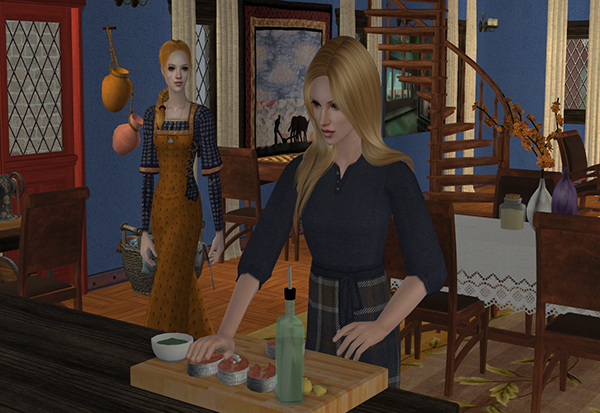 “Yep. It only costs time and there’s a lot of it.” Olivia nodded. “Not to say that I don’t like fish, just I ran out of new recipes for it three weeks ago. So I’ll admit to looking forward to Sunday when it’s roast or venison or anything but fish.”

“Let me try.” Olivia laughed. Nessa looked at her. “No, really. I promise, I’m not a bad cook.” Nessa nodded and got the fish out of the cold larder handing it to the woman. If the way she handled herself in the kitchen was any indication, she was probably a lot better cook than just not bad. 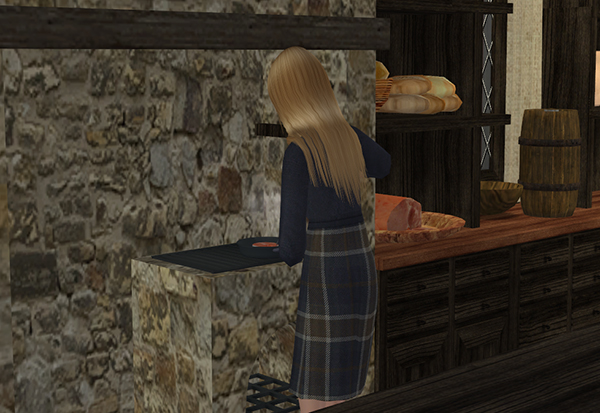 Nessa watched as she mixed spices together, her brows drawing in slightly. “Trust.” Olivia said, extending a placating hand. Nessa shook her head and said nothing. But trust certainly was easier to come by when the fish hit the pan on the hearth and filling the cottage with in moments with a heavenly aroma.

“Is that your way of asking if you can stay for supper as well?” Jarrett laughed.

“Nah, well–,” Sawyer inhaled a deep breath. “if you were offering.” Olivia laughed. 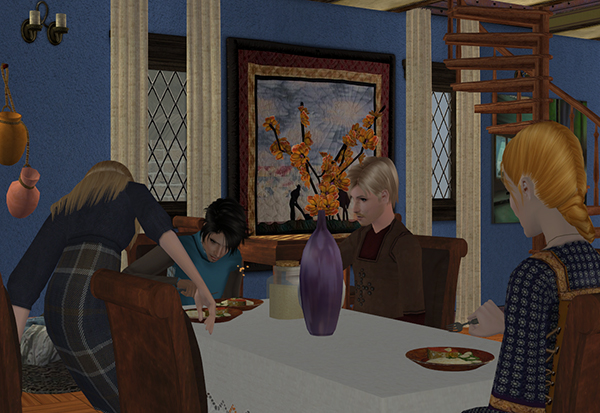 “Wash your hands, there’s plenty.” The blonde said nodding toward the sink. “And this is almost ready.” In the time it took the three of them to get washed up and sat at the table, Olivia had the fish on plates and delivered all four to the table with a professionalism that bespoke of waitressing in her background.

“Uh oh, if the way to a man’s heart is through his stomach, Jolene might have competition.” Nessa teased. Sawyer blushed and dropped his eyes. Nessa had to agree, wonderful almost didn’t seem adequate as the tender fish melted on her tongue, the spices she’d looked in askance at earlier melding together like a symphony in her mouth. 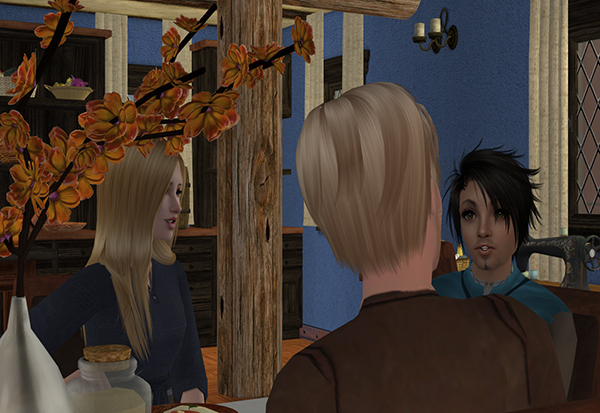 “Nah, I’m not a homewrecker. Is Jolene your girl, then, Sawyer?”

“He’d certainly like her to be. Jarrett tells me he’s worshiped at her feet since she arrived last year.” Nessa said with a laugh.

“You didn’t have to put it quite that way.” Sawyer’s flush deepened to a painful eggplant hue.

“What are friends for  if not to tell embarrassing stories about you.” Jarrett interjected. “This is wonderful, though, Lady Olivia.” 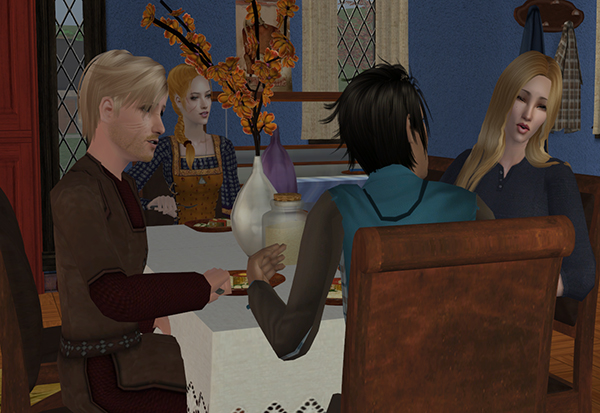 “Just Olivia, or Liv if you’d rather. If you keep saying lady, I’ll probably keep looking around for who you’re talking to.” Olivia said. “And thank you, I’d hope after ten years of working in kitchens I’d figured something out.” She smiled with a faint bit of pain in her eyes. “I’d hoped, at least–some day down the road–that I’d be able to open my own restaurant, but…”

“Well, maybe you can. Lady Tiffany can build you one.” Sawyer offered. “At least if we can pull her away from the King’s castle.”

6 Responses to These Days