“I still can’t believe how bright the stars are here.” Victoria said her fingers running through the grass. Somewhere up there her grandmother was shrieking about the likelihood of grass stains.

“Why’s that?” Camden asked as they laid back on the grass, starring up at the sky.

“Light pollution, mostly. Even on the clearest day back home, there’s too much light in the city to be able to see the stars this clearly.” Her head came to rest on his shoulder, the feel of silk against her cheek, warm and soft, the rise and fall of his breathing.

“I used to watch the stars a lot when I was on my quest.” Camden said. “It’s much nicer watching them with you than with my horse.” Victoria chuckled.

“When do you move into your new manor?” She asked. 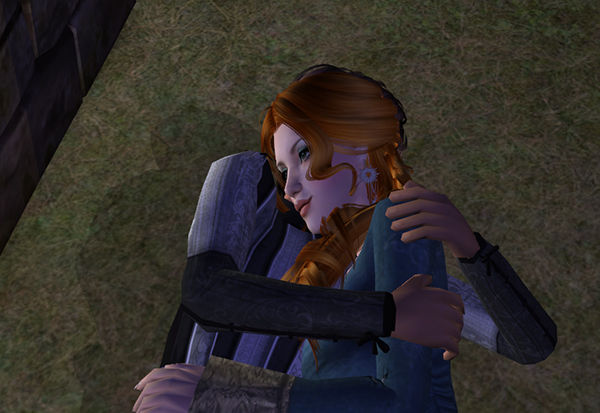 “Tomorrow, probably. If the weather cooperates.” Camden stretched a little, his arm tightening just slightly around her shoulder. “I, uh, wanted to talk with you about that.”

“Would–would you–would you like to come over tomorrow, for dinner?” Camden said the last part in a rush that made Victoria almost positive that that wasn’t what he was going to say originally.

She sat up and looked at him for a long moment. “I–I…” 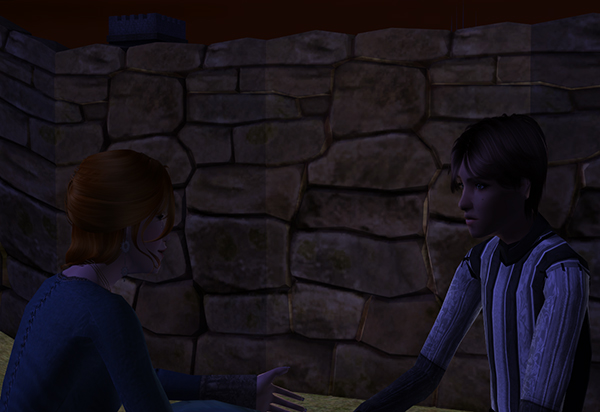 “I’m just asking you to come for dinner.” Camden said. “Vikki, please.” She chewed on her lip, avoiding his so very green eyes.

“Camden, I think we might be…” She sighed and made the mistake of looking at him. he was twisting a strand of grass between his fingers, the lantern light touching off his hair and softening his face.

“It’s dinner.” Camden repeated in a way that Victoria would have bet money was as much trying to convince himself of as much as her. “If you don’t come–then…”

“You could always come to dinner–at Ren’s with us.” A few days prior Peyton had decided that before someone could suggest that, as Ren’s house had three spare bedrooms, someone make use of them, that she and Victoria would move in.

“I worked too damn hard to get him, Vikki, I’m not gonna let any other chick move in and see just how much better a wife she could make for him.” Peyton had said.

“And I’m coming, because?” Victoria had retorted with a quirked eyebrow.

“Because we need a chaperone, or at least the appearance of one, it’ll make it look less like impropriety,” Peyton had shrugged. “We’re not married yet. You’re there to make sure I’m not sneaking into Ren’s room every night. That might knot Gray’s panties.”

“You could still sneak into Ren’s room.”

“Doubly so cause you’ll suck as a chaperone, you’re always with your boy toy.” Peyton laughed. “But it’ll look like I’m keeping an eye on you too. See,” she gestured, “it’s a mutual respectable thing.” 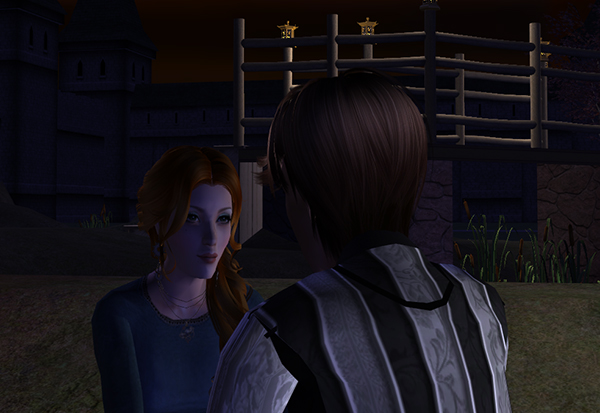 “But–you can’t see the house if I come over to Ren’s.” She was going to lose this–argument? discussion? whatever–she was gonna lose it, cause she couldn’t even begin to win it in her own head.

“Alright, I’ll come for dinner.” Victoria said with a sigh. 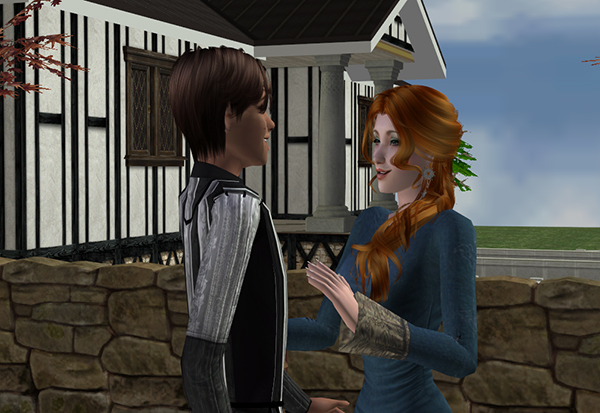 If there was one thing you could say for Tiffany, she knew how to pick locales. You could see straight down to the shore of Lake Haven from Camden’s front yard. “I’ll have to decide what to do for plants.” Camden said as they walked through the white washed iron gate.

“But you have the beds all marked out.” Victoria smiled. “Most guys, especially your age wouldn’t even think of it.”

“I didn’t, Lady Tiffany did. She said it’d make putting the fountain in the right spot easier.” Camden admitted. It wasn’t a huge house, so the tour didn’t take long. Nor did it take long for Camden to toss together a salad. 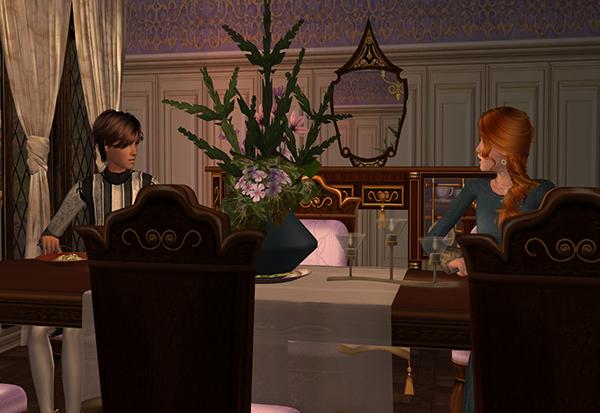 “I wouldn’t have thought lavender cushions and wallpaper.” Victoria commented as they sat at the long wood table in the dining room. It was sort of empty. Not too many personal touches, the whole house felt like it was waiting for… something.

“Mistress Raquel picked them. She helped with a lot of the decorating. Said it gave her something to do.”

“I’m thinking, after Lady Peyton’s wedding, of taking a short trip up to the summer home that my family kept. The estate was–lost–but I might be able to find some things in the summer home as it wasn’t visited after the plague started. At least tapestries and portraits and the like.” Camden said. 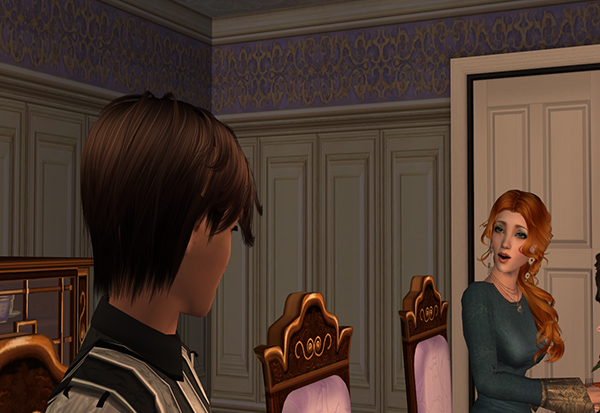 “That sounds like a great idea.” Victoria smiled. He seemed to hesitate for a moment, as if about to ask something else, then shook his head and asked about Peyton’s wedding plans. If ever there were a person less prepared to plan a wedding…

That was definitely the door. Peyton thought, struggling her way out of sleep. About a million “could be wrongs” went through her head as she shook out of the blanket’s hold and stumbled to the kitchen. She scrubbed at her eyes, blinking at the darkness. A sound came from her right and she turned. Just barely, as the fire was banked for the night, she could make out… 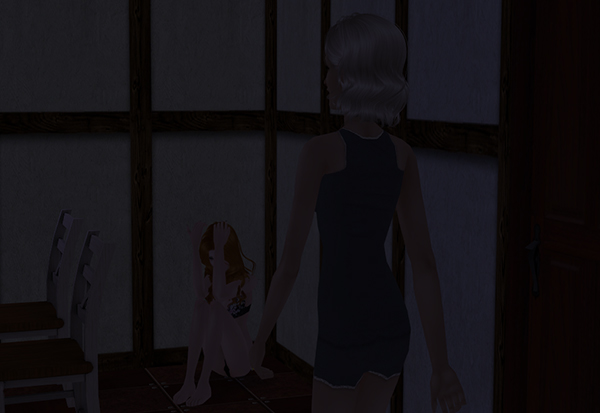 “Vikki? Vikki, what’s wrong?” And why are you sitting in the corner of the kitchen in your panties? was hard on the heels of that thought. But that could wait. She started at the sound of Peyton’s voice and brought her arms up over her head, curling in on herself.

“C’mon, what’s wrong, you can talk to me.” Peyton said trying to project reassurance into her voice. Victoria stumbled to her feet and buried her face in her hands again. 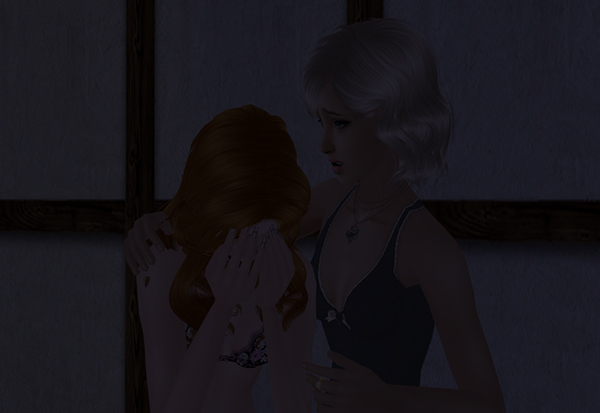 “I–oh–How did this happen, Peyton?”

“Not know what “this” is, I can’t say.” Peyton told her, rubbing her hand up and down the other woman’s back in what she hoped was a calming gesture.

“Peyton, he’s not even eighteen yet! And I just–” Victoria sobbed out. “I just raped him!”

“Somehow I doubt that.” Peyton said as Victoria wailed. “Vikki, Vikki, listen to me. Did you like tie him down or in anyway coerce him?” 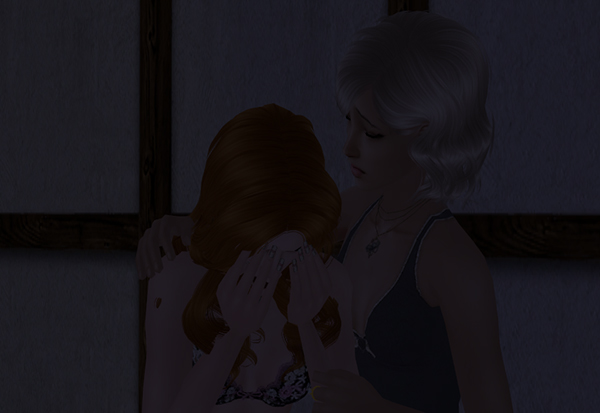 “Then it wasn’t rape.” Peyton said waiting for the shriek she knew would come–agh, right on schedule. “Vikki, Vikki, listen to me.” When that didn’t work. Couldn’t the morning after guilt have had the decency to wait until morning? Seriously. “Screw that, listen to yourself.” 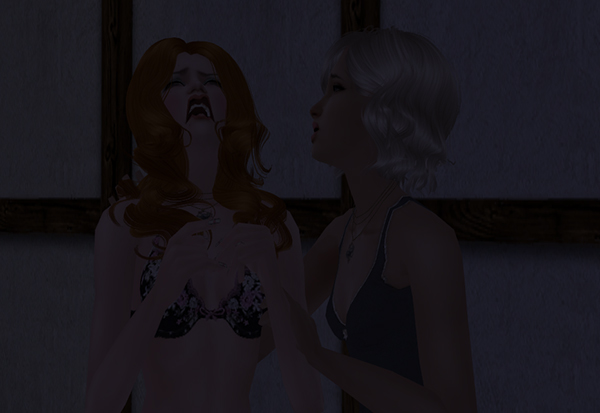 Vikki cut off in midwail and looked at Peyton, eyes huge. “Now, I understand your guilt.” Sort of. “But before you wake the entire neighborhood and we have to explain this to everyone, let’s think about this.”

“You were in prelaw, there’s more than five years between us!” Victoria moaned, thankfully a little lower. Peyton shot a look at the ceiling and nudged Victoria toward the room Victoria was staying in. 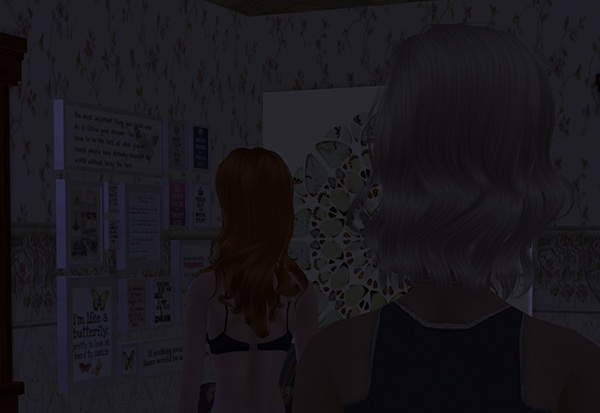 “True. But there are no statutory rape laws in the country were in, Vikki. Not to mention, Camden’s like three months shy of turning eighteen. He’s barely a kid by our standards, and might I point out, quite lawyerly, the majority in Shadowcrest is sixteen. He’s old enough to enter a contract and he’s old enough to have sex.” Peyton pointed out. Victoria was still sniffling. “Forgive me a tangent here, but, did you really come all the way home wearing that?”

“I could find this without having to light a candle. My dress is still somewhere at Camden’s.” Victoria admitted shamefaced. 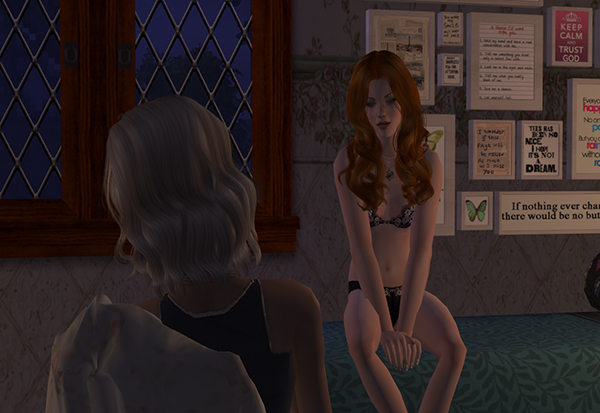 “Okay.” Peyton refrained from rubbing her temples by grabbing the flint and steel from the kitchen and lighting the candles so they weren’t sitting in the dark. Then she turned the chair from Victoria’s vanity toward the bed and sat down. “If you can tell it without wailing and going all mea culpa, he’s a kid, rape-0rape-rape, aka all Joey on me. What happened.” 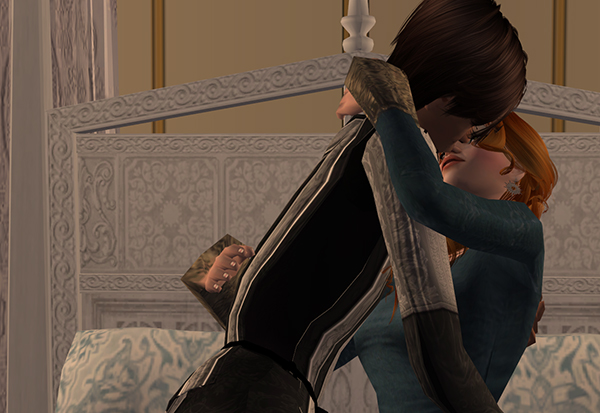 “I don’t even know, Peyton. I meant to come home and then he kissed me good night and then we were in his room, on his bed. I–mean I like him, but it’s still–now I’ve totally ruined him for anyone else.”

“Back up to the room. What color was his bedding?” Peyton asked. 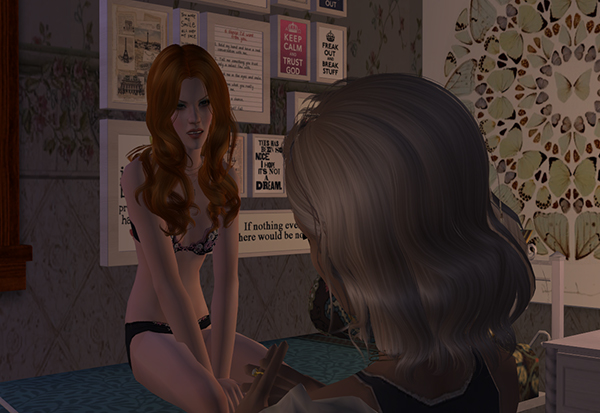 “What does that have to do with anything?” A flash of anger crossed her face.

“It helps me set the scene.” Peyton said blandly.

“Purple, and white–and teal.” Victoria said. Peyton mouthed an Ah, but said nothing. That’s what I thought. Just who else is she thinking he’s likely to want?

“Then there went my dress and there went his tunic and… how much detail do you want?” 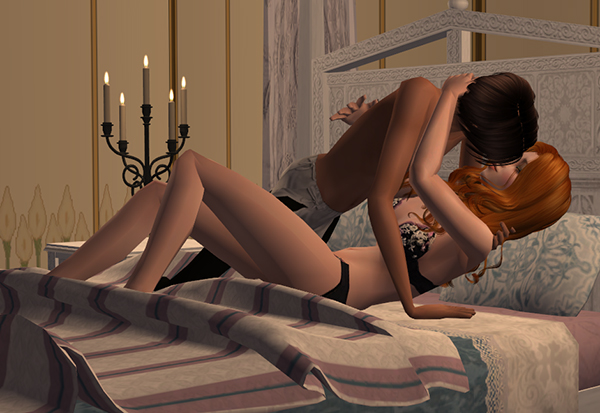 “Can remember all to well.” Victoria said primly. 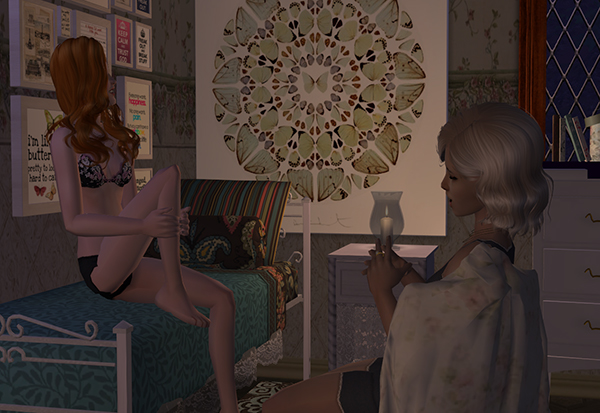 “This is plenty. So, lemme ask this, if Camden weren’t seventeen, if he’d been–seventy-one, would you have called this encounter a rape?” Peyton tapped her fingers against each other. 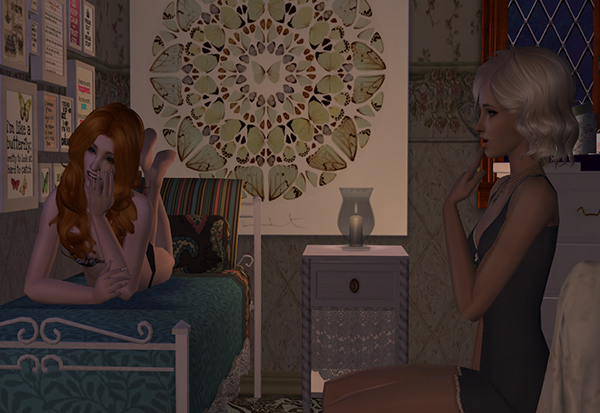 “He’s a guy, a teenaged guy. Unless there’s a very good reason for not having the sex, it usually takes more than sex to make them hate someone. At least if it was good sex…” She looked pointedly at the redhead, who blushed and looked away. Meh, that’s what I thought too. “Vikki, you’re hating yourself WAY more at the moment than Camden will hate you for this.” Peyton shook her head. Victoria climbed onto her stomach and propped her head up between her hands.

“Oh, come on, Vikki. You didn’t ruin his life. It’s not like a teenager can’t survive through one panties on the ceiling fan experience. In fact, I’ll bet you wearing that frothy white lace wedding dress you suggested versus the one I want, that as soon as that kid wakes up and finds you gone, he beelines straight here. If you’re lucky, he’ll even bring your dress with him.”

“Really the bet or really that’s what I th…” Peyton grinned as a brisk knock came on the door. “I’ll get that, you might wanna–just saying.” Peyton left Victoria scrambling for the dresser and went to the door. 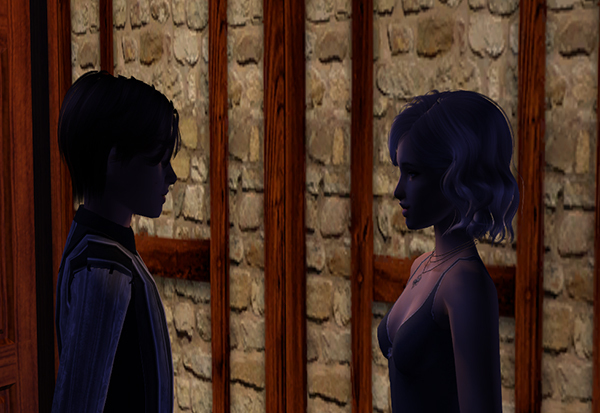 “I’m so sorry to bother you, Lady Peyton.” Camden stuffed his hands behind his back, but not before Peyton saw a peek of teal.

“Vikki’ll be out in a minute.” She noticed him glance over his shoulder, then gulp. “Or now. Why don’t you guys go uh, talk it out. I’ll get some–tea.” Peyton gestured toward the couch. 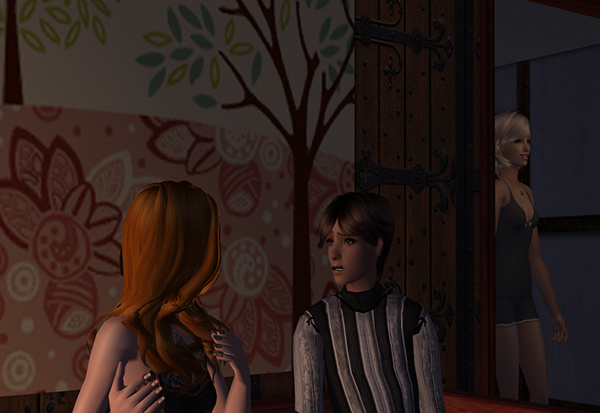 If they kept pausing and stammering it was going to take them all night to talk out anything. But maybe this didn’t need talking, at least tonight. She heard a door upstairs open and slipped out into the shadows and up the stairs. 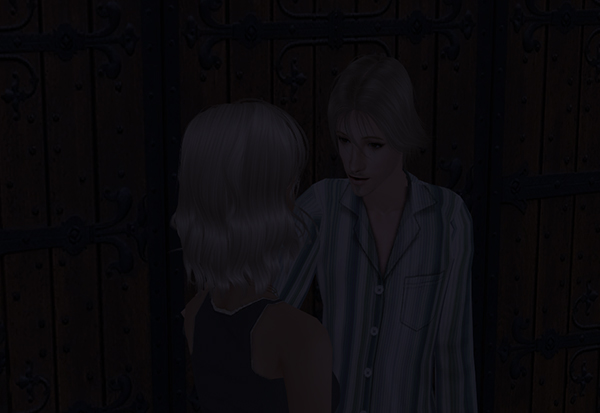 “Oh, just your average middle of the night crisis.” She smiled. 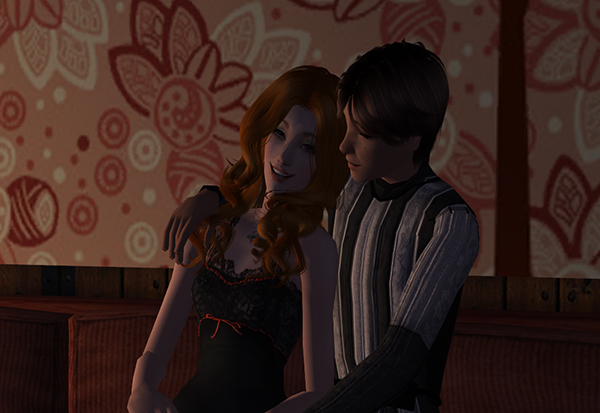 4 Responses to It Is Now