You’ll Be A Woman Soon 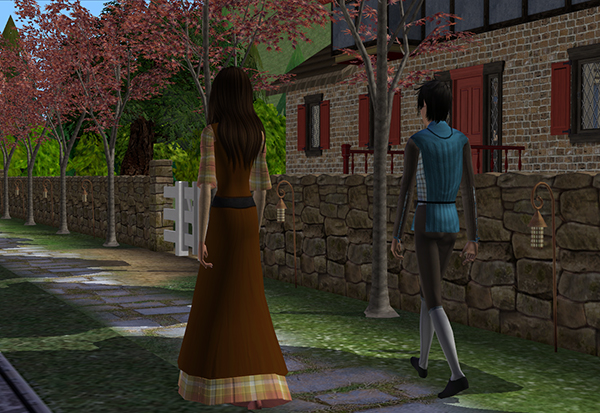 “You know, I’m glad that I’ve got a chance to talk to you by myself, Zahrah.” Sawyer said giving his most disarming grin. Zahrah rolled her eyes.

“You’re married now, Sawyer. And your wife is jealous.” Zahrah told him. His brow went upward.

“That’s what everyone says and they do know her better than I do.” Zahrah shrugged. 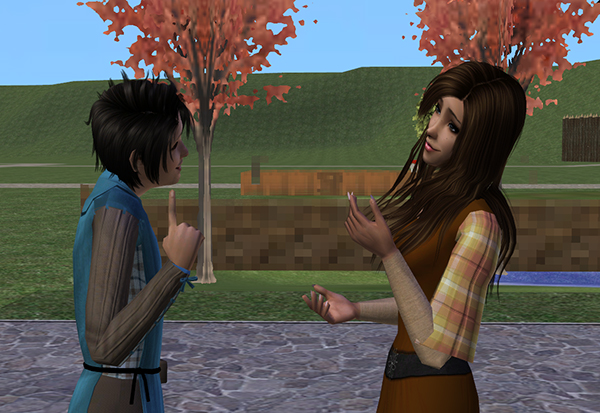 “But you’re married.” She put her foot down on the ground.

“What’s the difference?” If she was going to have to get married as a teenager, maybe it would be better to know this now. Though she’d hope that if she got married it would be for love and to someone who she would never, ever want to divorce.

“Between an annulment and a divorce?”

“No. I mean how hard is it to get an annulment over a divorce.”

“Depends. Depends on the priest, depends on the kingdom, depends on if your marriage has been consummated.” Sawyer told her. “I think if we were really miserable, both Lord Gray and King Lachlan would give us a divorce.”

“So, it’d only be the consummation that would be a problem for you and Jolene?” Zahrah asked only to see Sawyer’s eyes drop to the cobblestone he was kicking at. “Sawyer? You–you guys haven’t–done it?” A flush crawled up his cheeks and over his ears as he continued to stare at the ground. 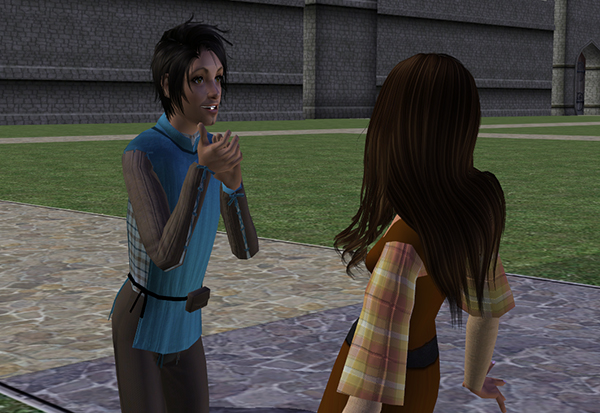 “Wow, cause if I was with a guy as hot as you–I think I’d have a hard time waiting til the wedding.” Zahrah exclaimed. Sawyer drew his hazel eyes up and looked hard at her.

“You–you think I’m–attractive?” Sawyer asked, cocking his head to the side.

“Hell yeah.” Zahrah said. “Most of you guys are. I mean, Emanuel is a bit mopey and emo for my taste, And Jarrett’s just–I don’t know how you could be attracted to him. And I mean, Lord Gray is kinda–I mean you just can’t entertain fantasies about him. There’s nothing there to work with if you spent five minutes in his company. But you’re very good looking.”

“What about Tate?” Sawyer asked after a moment’s quiet.

“Well, you know, cute, like Alistair’s puppy, or the new foal, or the baby chicks.” Zahrah cocked her head to the side. “How else could he be cute?” 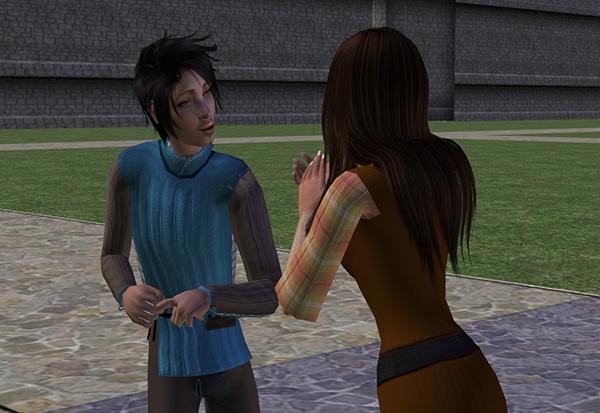 “Like an attractive guy is cute?” Maybe Sawyer meant it as a statement, but it definitely went up in pitch as if he weren’t sure. Zahrah must have looked puzzled. “I’ve heard Lady Fiona telling Lady Jennica that King Lachlan is ‘cute’, which sounds different than when Lady Heidi or Jolene would tell me I was cute. The former sounds like someone you’re–what’s Mistress Peyton say ‘in to”? The latter was definitely baby chick cute.”

“Oh, well, it’s not that Tate’s not kinda hot. He’s just–he’s not swoon-worthy. He’s so boy-next-door.” Zahrah tossed her hair. “It’s not that I don’t like him–but he’s like best friend material. Sweet, kind, the guy you can depend on,” She listed.

“You make that sound like a bad thing. Mistress Raquel says the same thing about Blake, only it doesn’t sound bad when she says it.” Sawyer said.

“And Alistair is the ‘leading man’?” Sawyer asked.

“C’mon, why is everyone so down on Alistair. He can be a really great guy if you get to know him!” Zahrah found her bottom lip pushing out into a pout. Seriously, it was totally like a movie, she was the only one who could see past his outside to the sweet guy he was underneath that. 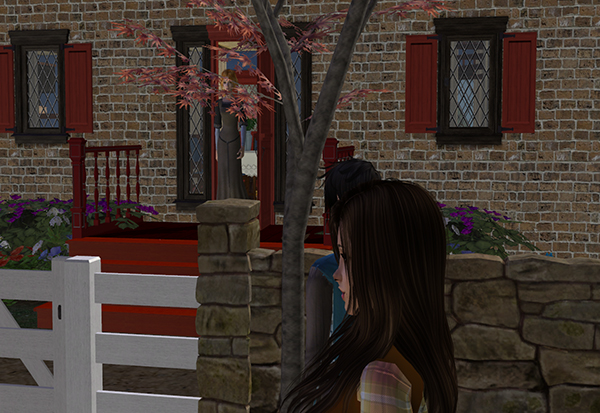 “Maybe we do know him.” Sawyer muttered before turning to resume his path toward the house that Nessa, Jarrett, and Olivia shared. “Morning, Nessa!” He called as she stepped out onto the small front porch. “You’re looking particularly lovely this morning.”

“Sawyer, your flattery will get you nowhere.”

“But you do! Doesn’t she?” Sawyer asked turning toward Zahrah again.

“Her–your hair looks nice.” She didn’t understand Nessa. She was so much prettier when she put a little effort into her appearance. Most of the time she didn’t do anything more than pull her beautiful strawberry gold hair back in a completely unflattering braid or knot.

Between Kennedy, Jennica, and Emanuel it wasn’t like they didn’t have cosmetics around to be worn. But she was pretty sure the only time she’d seen anything on Nessa was at Jolene’s wedding. She didn’t even attempt to cover the scars on her face or give you anything else to focus on.

“Okay, Liv, you win this one.” Nessa called back in the house, a laugh drifting out in response on the late summer breeze.

“And I’ve resigned myself to not winning.” Nessa said dryly, Sawyer laughed as he followed her into the house. Zahrah followed Sawyer, knowing she shouldn’t, he was married but he had a very cute, tight butt under those hose and the fabric left very little to the imagination and it was kind of distracting, really.

“So, you ready to head up now?” Jarrett asked standing up from the table. 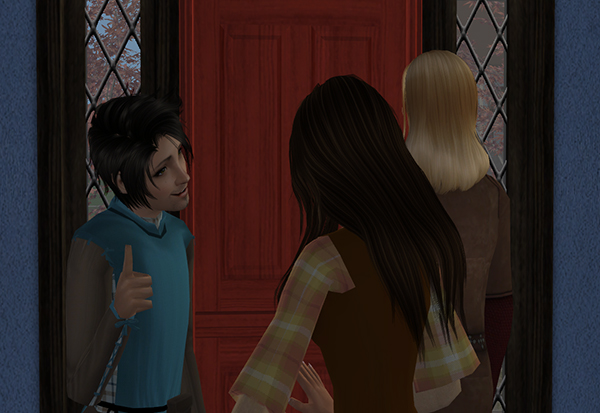 “Just about.” Sawyer said, turning to Zahrah, who was still lingering in the doorway. “You know, exciting isn’t always better. Fires, floods, and animal stampedes are all kind of exciting, that doesn’t mean they’re good.” What? Why was he going all Yoda all of a sudden? But he apparently wasn’t going to explain because he just nodded to her, bowed to Nessa and Olivia and followed Jarrett out the door. 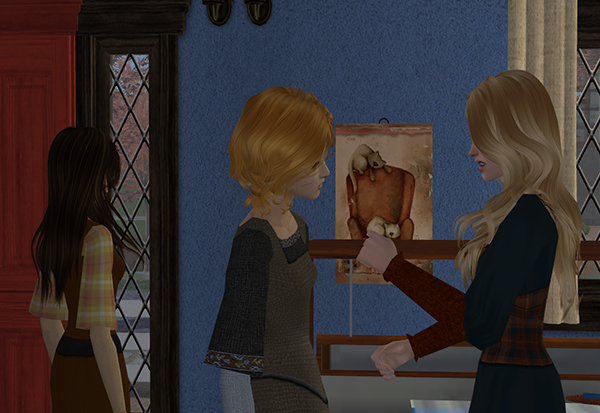 “So you never finished telling me what he said.” Nessa said to Olivia who put down the needle she was using to weave with.

“Oh–you know him. King of the backhanded compliment. He asked me if I always put on weight in my ass because it was looking better these days.” Olivia tossed her hair over her shoulder and looked at her backside.

“Well, what did you expect, he’s not exactly Shakespeare.” Nessa said. “And your ass looks fine, Liv.”

“That’s cause you don’t have to see me naked.” Olivia retorted dryly. “Then again no one else does either, so I guess I can live with it.” 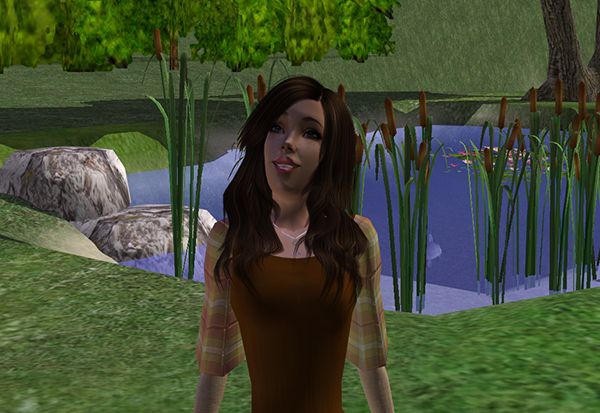 Afternoons like this, soft and sweet like warm honey, were just too rare to spend cooped up in the house helping bake pastries. And even a hard task master like Olivia realized that the heart wasn’t in her apprentice about the second time she found her thoughts wandering off as she was applying icing, getting it all over the counter. So Zahrah found herself banished to the outside while Nessa and Olivia finished up the last couple of batches.

The only thing better than lounging on the pillowy grass watching the clouds in the sky was if there had been anyone to watch them with. Someone like… 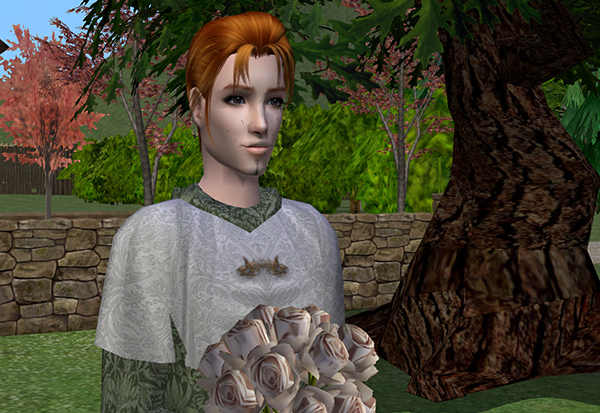 “So the cruel dungeon master let you out for the afternoon, my lady?” Alistair’s handsome face stepped into her view. She felt her heart thumping just a little harder in her chest. He was so handsome and even though almost everyone called her my lady or lady Zahrah, there was just something–personal about the way he said it, something cutely possessive. Like a pet name.

“Olivia isn’t cruel, she’s really nice.” Zahrah told him as she stood up and brushed the grass off her skirt. 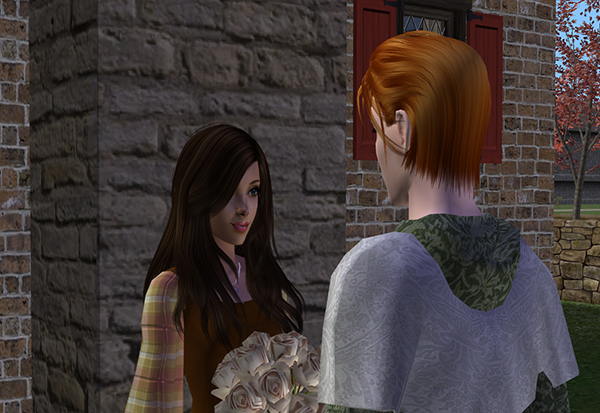 “Certainly.” He smiled, although there seemed to be something else behind it. But before she could decipher it, he held out a dozen roses to her. It wasn’t shy how he did it, as Tate might have, with a blush and a stammer, simply graceful and charming. “A rose for a rose, Lady Zahrah.” No, Zahrah was the one blushing.

“Thank you. They’re beautiful.” Zahrah said bending to inhale them.

“Well, what else could I bring such a beautiful lady” He asked. 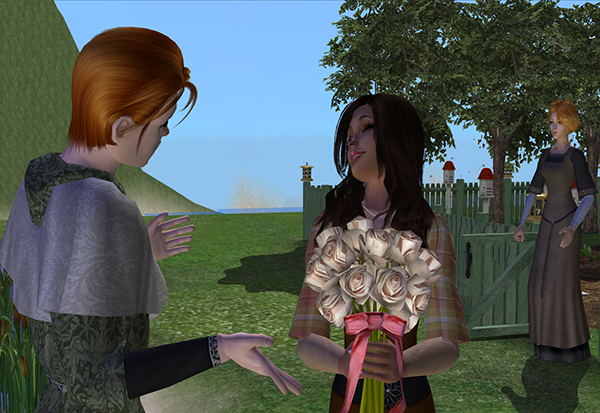 “Oh, there you–oh Alistair.” Nessa said coming through the gate.

“Lady Nessa.” There was something small and tight in both their voices, though all they directed toward her was smiles, forced smiles, but smiles. Like she was five again and couldn’t see through it.

“Does Olivia need me for something?” Zahrah asked, her heart sinking, just a little. Yes, she was supposed to be helping Olivia and learning how to cook, but really who wouldn’t rather spend their afternoon with their crush, holding roses and being flattered rather than packing pastries up for the next morning’s market.

“Well, we do need to get these carried up to Fox’s for market.” Nessa said. A whine built up in Zahrah’s throat, which she wouldn’t give voice to, it would only make her sound like a petulant little kid in front of Alistair. 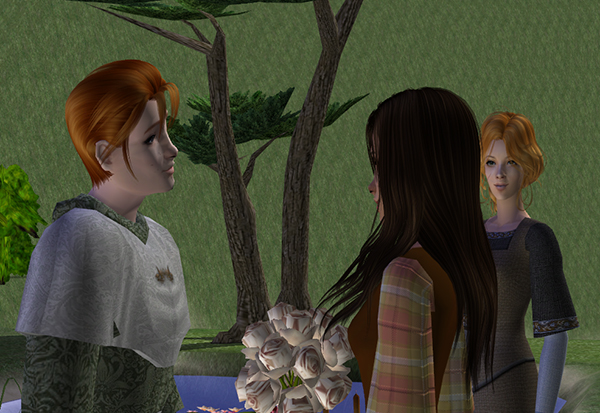 “Only if someone else wants to go check on the barn and feed the animals in it.” Nessa’s voice was bland. “And Zahrah is supposed to be Olivia’s assistant, which makes carrying them part of her job.” Zahrah sighed.

“Tate!” Nessa called, suddenly. Zahrah looked at Nessa, then in the direction Nessa was looking, yes, there was Tate. Maybe Tate could take the pastries to market with Olivia and Zahrah could leave early. Although there was a part of her that felt guilty for even thinking it. Tate had already put in most of an afternoon working for the king, it probably wasn’t fair to make him do her job on top of his.

“One moment, Lady Nessa.” He called back. 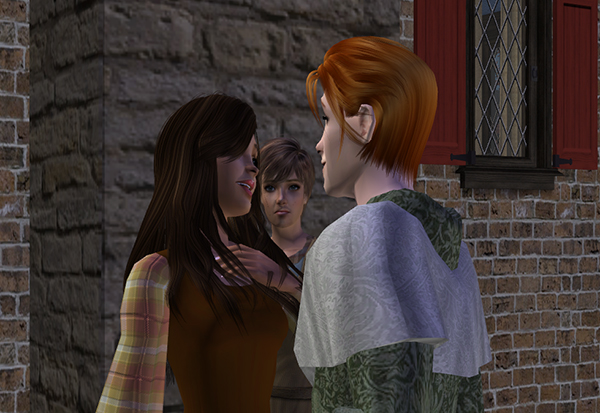 “Well, my lady, it seems our time has been cut short.” Alistair leaned closer to her to murmur in her ear. If she’d been looking she might have noticed the way his leaning closer was timed just for when Tate rounded the corner. Might have seen the look of hopelessness cross his face. See the look of disgust cross Nessa’s. But all she could see were Alistair’s beautiful brown eyes. 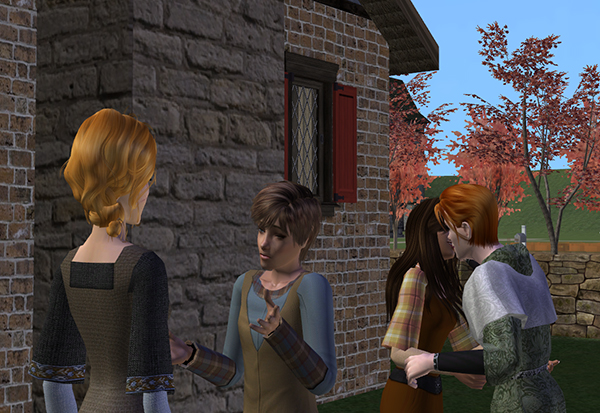 “Guess so. I’ll–see you later?” She asked. He nodded with that smile that made her knees get all quivery, then headed off toward the front gate. She was still watching him, so she didn’t see Nessa pat Tate’s shoulder, or the pain on his face as the other woman did so.

8 Responses to You’ll Be A Woman Soon