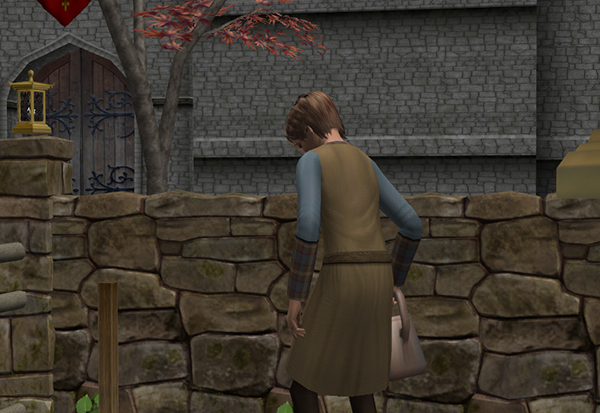 “Oooh, I had never noticed that before.” Tate heard Lady Zahrah behind him, but it was obvious by the hushed tone and snicker that she wasn’t talking to him. 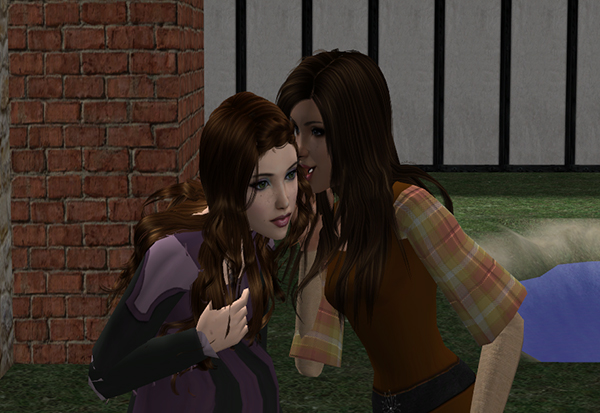 “That. Tate’s got a really nice ass.” Tate was glad that he was facing away from them, because his face had to be a red to rival the king’s chair cushions. And it was only getting worse as they both burst into snickers. The giggles lead him to wonder if she was serious, it would be nice if she found something about him to be attractive. It might mean he’d have a chance against Alistair. His hand tightened on the watering can handle to the point of pain.

Damn it. He thought switching the hand that the can was gripped in and reflexively clenching his now free hand. There was nothing like finding yourself short. Except, maybe, short a couple of times over. He knew he couldn’t compete with Alistair on looks, or manners, he was the fifth kid, third son, of an indentured farmer. Plain as the dirt he was currently pouring water over. Alistair was a noble.

Oh sure, he’d been disowned, but the same blood that ran through his veins ran through the veins of some of the greatest men in the kingdom, both past and present. He was a cousin of some sort of Lord Dolph’s, and there was some connection between Alistair and Sir Wesley.

He wasn’t related to King Lachlan, but he had been related, distantly to King Phillip. And he’d grown up in the court, with all the advantages. Tate might as well have grown up in a barn for all the manners he had. He wasn’t charming, or talented at anything except growing plants. Oh, that would impress a girl. He could grow roses, but he had absolutely no idea how to go about giving one. 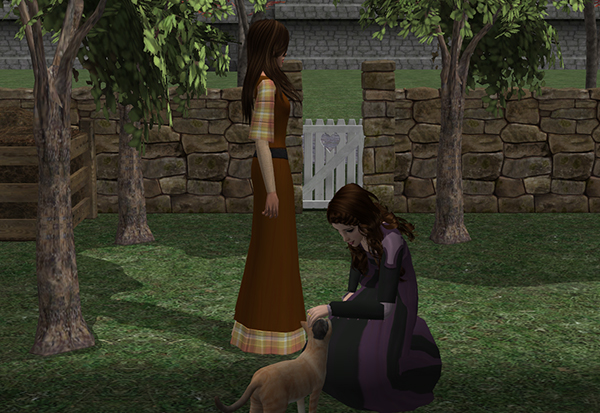 “Oh, hi, Butterscotch.” Tate heard Mistress Raquel say. He turned around to see the carpenter’s wife bending down to pet his cat. The bending down was no mean feet. Compared to Mistress Raquel’s slim form, her belly seemed almost as big as she was. He had no idea how much longer she had before she was due, but he certainly would have kept an eye on a pet or horse if they’d been her size!

“Mistress Raquel, Lady Zahrah.” Tate bowed, a bit stiffly, Sir Wesley was trying to teach him how to bow. There was still talk of the borders being opened before winter–or at least of diplomats arriving before winter–and Tate had to be ready to receive them and not look like a plowboy stuffed into a page’s uniform–even if that was what he was.

But like when Sir Wesley tried to teach him anything that was graceful, he might as well have had two left feet and a spear shoved up his arse for all the graceful he managed.

“Afternoon, Tate. Blake was wondering if you’d be–attending the King tonight?” Mistress Raquel said, giving the soft fur on the cat’s head one last stroke before standing up.

“Nah, I have the afternoon off. His Majesty says that if I have the day off, I might as well have the whole thing off.” Tate smiled even if he couldn’t keep his eyes from sliding sideways to Zahrah, who offered him a friendly smile back. A friendly smile. It might not be exactly what he wanted, but it was a smile and he had to keep from notching it up to a foolish grin. 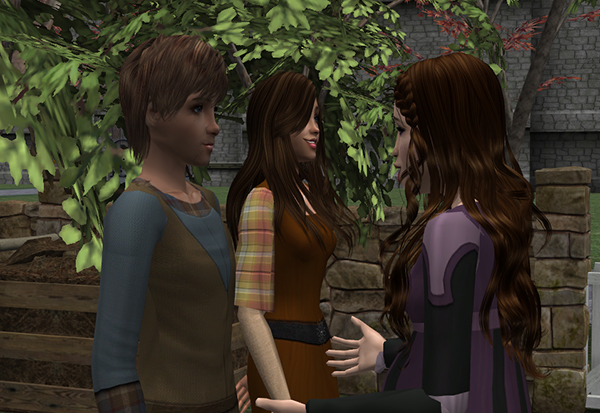 “Well, we were wondering if you’d like to come for supper.” She offered.

“Oh, does Master Blake need help with something?” Tate asked trying to rearrange his evening chores to make time to help with it.

“Nope, just dinner.” Mistress Raquel said with an encouraging smile. “Sawyer was moping this morning when he came by to help Blake with some something that Tiffany wants for the pub. Apparently his wife is going to be at Heidi’s all day.” 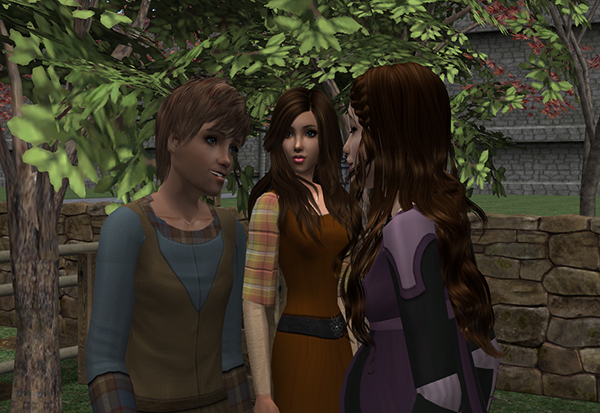 If Lady Jolene were invited to Lady Heidi’s for dinner, why wasn’t Sawyer? It wasn’t the stigma was it? That Sawyer was just a gutter rat and not fit to eat at a Lord’s table?

“And Sawyer didn’t want to tag along, he says that he’s always afraid that he’s going to sit on one of the chairs and break it or something.” Mistress Raquel rolled her eyes. “Blake’s a better carpenter than that. But I understand what he means. I sorta feel out of place myself when I’m at Heidi’s or Victoria’s, y’know?”

“Aye.” Not that he spent much time at any of the noble’s houses. Still when he’d first come to live with the king, when the plague was really still a rumor in Shadowhaven, he’d felt that way about the house that was now his. While he was still racking his brain to think of something to add onto that, perhaps that it got better with time or something, Butterscotch fell into the fish pond and looked so affronted and dismayed with her wet and bedraggled state that he went to go find her one of those treats that Lady Nessa had given him for her. 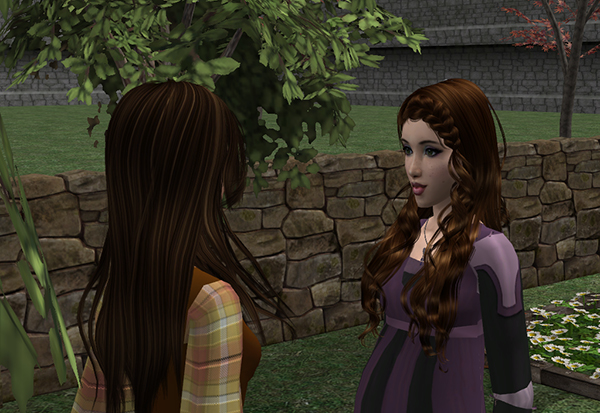 “Would you like to come over too?” Mistress Raquel asked, obviously asking Lady Zahrah.

“Can I invite Alistair?” Tate’s heart plummeted and he wouldn’t have been surprised if he looked as miserable and unhappy as Butterscotch at the moment. It was a good thing he as in the barn and not in the yard. “That is a no face, that is definitely a “no” face.” Lady Zahrah pouted, he could hear it in her voice. “I don’t see why you don’t like him.”

“I don’t see why you do.” Mistress Raquel responded.

“No, Jarrett is a sweetheart. Alistair is an ass.” Mistress Raquel said with a blunt forcefulness that Tate certainly had never heard in her voice before.

“He has never been anything other than a complete gentleman to me, Rae.” Lady Zahrah told her.

“You know, he used to say my lipstick looks like swamp muck and that I had a disease on my face. He used bully Blake too.” Mistress Raquel answered in that same tone.

“Would you ever call your dad a sweetheart?” Mistress Raquel asked.

“I’m not going to say that you have to choose between me and him or anything.” Mistress Raquel said. “Just don’t ask me to like him.”

“Here you go, Butterscotch.” Tate murmured to the cat who daintily took the treat and made her way off to a patch of sun. 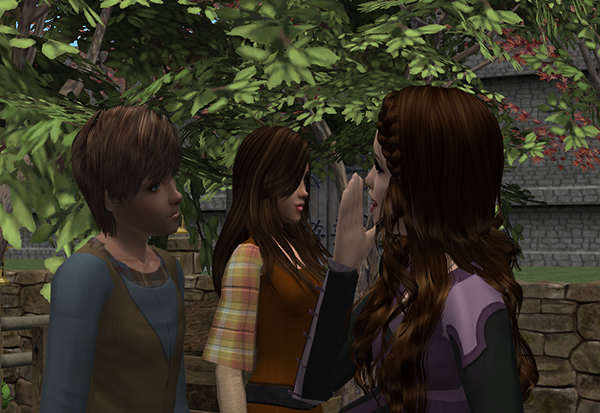 “So, about dinner?” Mistress Raquel asked as Tate as he walked into the shadow along the side of the house, feeling, very definitely, like he was walking into a real life shadow. 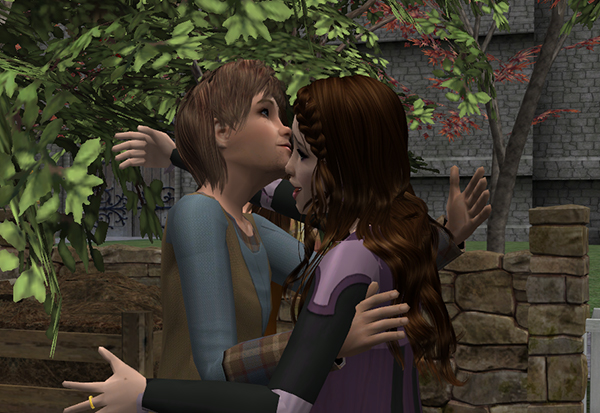 “Great! We’ll see you in a couple of hours then.” She pulled him into a hug.

“All-All right, then.” Tate said. “Lady Zahrah.” Tate bowed again, trying extra hard to do it exactly as Sir Wesley had taught him to. Lady Zahrah smiled and turned to follow Mistress Raquel who was off toward the gate already. 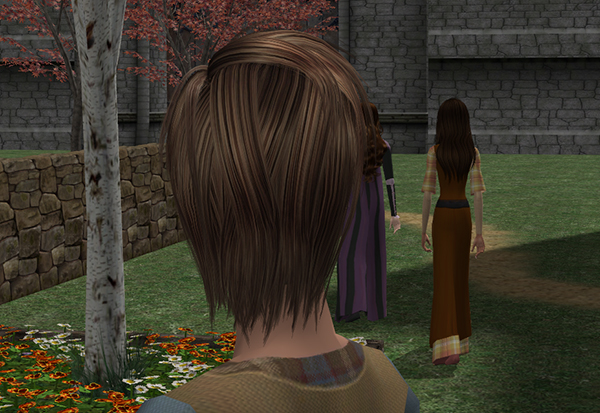 If she was expecting him in a couple of hours, he’d probably better get his chores finished so that he wasn’t trying to get them done after dark. He made his way into the barn, pausing in the doorway as always to look at the beautiful mare in the first stall. Why King Lachlan had given him such a beautiful horse Tate would never know. 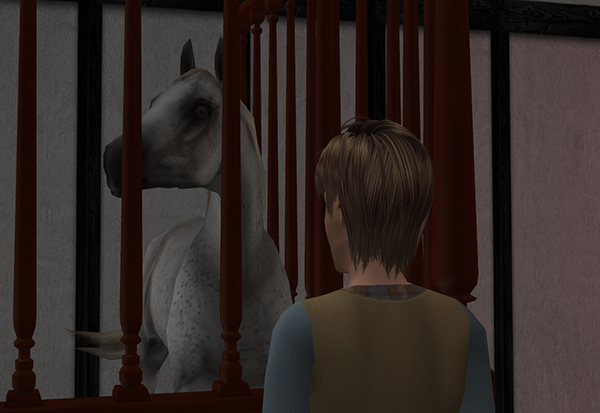 Tate wasn’t a noble or anyone who deserved to ride or let alone own a horse like Dumpling. He would have counted himself lucky just to have the chance to groom her. She rattled her oat bucket. She’d grazed that morning, but she was just a wee bit greedy and he–probably–spoiled her. At least there were two girls in his life who liked him. He thought reaching out to stroke the silky mane, his fingers, normally so clumsy, finding that spot behind her ear with ease.

The mare sighed with bliss and tilted her head then she nosed at the bucket again and Tate laughed and went to find her some oats.

“I dunno, Dumpling.” He said to the horse who whickered. “Maybe, maybe Sawyer’s right, Lady Zahrah likes Alistair, and I know I’ll never live up to that. Never.” He shook his head. “You can put a tiara on a goat, that doesn’t make her a queen.”

“He thinks I should court Lady Olivia.” Tate sighed. “She thinks I’m a kid, which I know Lady Jolene used to say about Sawyer. But Sawyer never agreed with that. But I do. I do think, compared to her, I am a kid. Maybe it didn’t matter to him, but it does to me.” 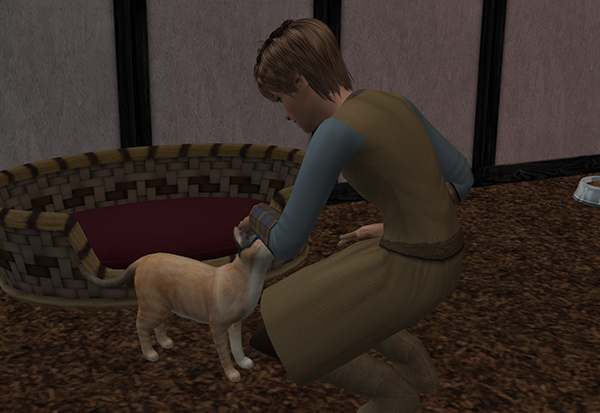 The horse said nothing, which was probably all for the better because if the horse started to talk to him, he’d know he’d lost it. After hanging her grainbucket back on the gate to her stall, he bent to pet Butterscotch who seemed to be mostly dry from her adventures in the pond.

“I just wish…” He shook his head. “If wishes were fishes, beggars’d eat.” What’s the point in wishing and hoping, for guys like him, you just had to appreciate what you had. And he had a lot already, a nice house, a steady job, and his two girls, what more did he really need?