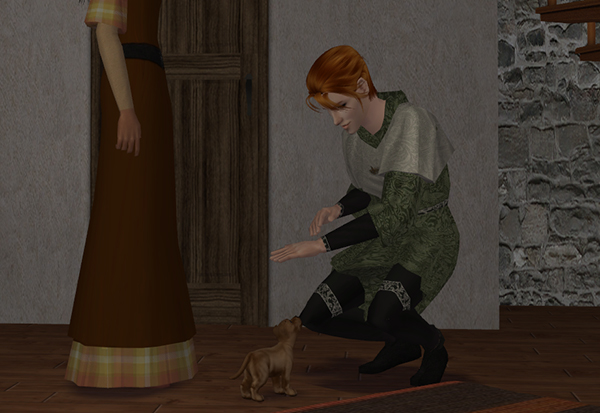 They’re home! They’re back! Thaniel tumbled out of his bed, tripping over his tiny feet and nearly faceplanting before running for the door. After a moment’s thought, he sat down, tail wagging. It was sit, right? Not chew, pee, or beg for food. When Master bent over and patted the top of his head, he knew he’d done right. 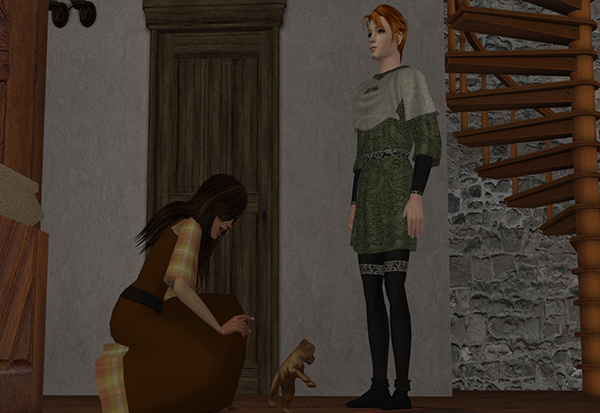 And then the lady that Master liked. Thaniel only tried to like the people Master liked, but it was hard sometimes. They were all nice to him, gave him treats and scratches, and that made it hard to not like them. Maybe when he was older he’d be better at it.

Still it was easily dismissed as Lady tickled his ears and rubbed his tummy. 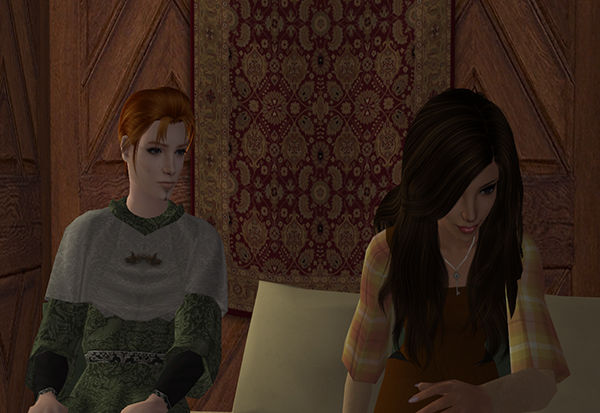 Play time seemingly done, Thaniel laid down on the rug in the sun and watched as Master sat on the high bench. Lady hesitated a moment and then slid onto the bench beside him.

“Alistair?” She kicked her foot back and forth, worrying with the thick fabric of her skirts.

“Why isn’t your house as nice as everyone else’s? I mean it’s nice.” She looked around the room. “But, it’s kinda–I dunno–bare.”

“I prefer the spare look.” Master said with a brief lift of his shoulders. 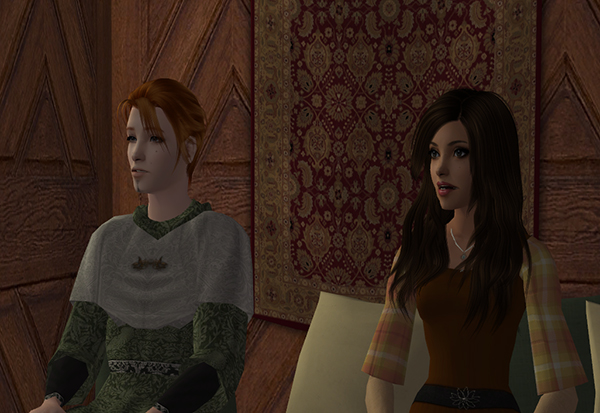 “My lady, I don’t need you to go to battle for me.” Master smiled. “There are no dragons in need of slaying here.” He tipped his shoulder into Lady’s and she blushed and giggled.

“Why–why did you come back to Shadowcrest? I mean…” Lady dropped off and bit her lip.

“For my father.” He smiled but it didn’t seem like a real smile. More the kind that he tended to give the horse-man who came by to talk about things sometimes. Thaniel knew that Master really didn’t like the horse-man, he was always in a foul mood whenever the horse-man left. Almost as bad as when the herb-lady came. Thankfully she’d only come twice. 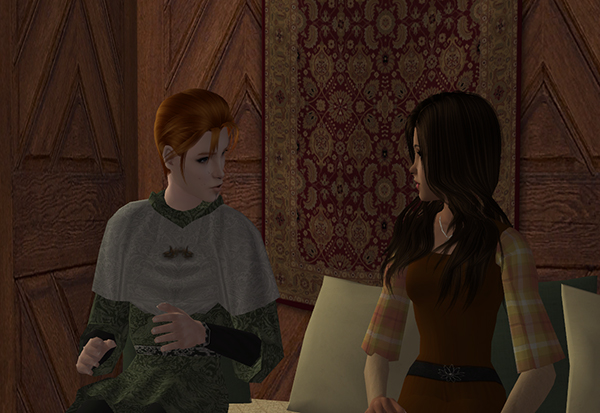 “But–didn’t he disown you?” Lady asked, cocking her head to the side as Thaniel did when he didn’t understand something that Master said.

“Aye.” Master said. Thaniel wasn’t sure what “father” was, but though he’d never met Master’s father, Thaniel knew he didn’t like him most of all. He made Master more angry than horse-man and herb-lady together.”But he was still my father.”

“Yeah, I guess you’re right. I’d probably go back to my father if he were sick or hurt, even with all the stuff between us.” Lady sounded sad. Odd, Lady had a “father” that made her sad and Master had a “father” who made him angry. Thaniel chewed on the itchy spot by his tail. 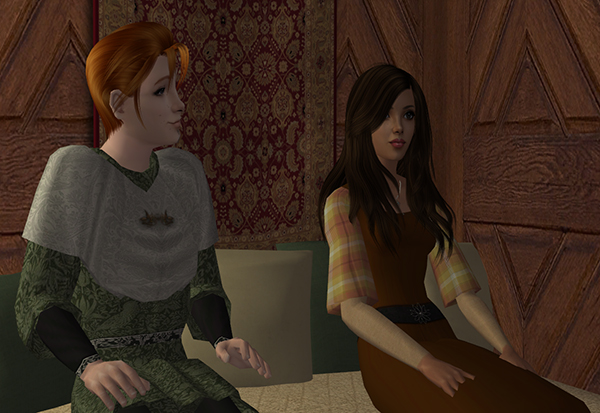 “My aunt used to say that parents always knew where the hooks were cause they put ‘em there.” Her foot thumped against the wood of the high bench. Thaniel gave up on the itchy spot by his tail for a new itchy spot behind his ear. His foot sorta sounded like Lady’s as it hit the floor.

“This is not untrue.” Master said. Lady looked at Master.

“Sorry. I didn’t mean to bring up bad memories.”

“I never know.” Lady slid off the high Bench and turned to face Master. “You guys never talk about it. I mean it’s like life didn’t exist here before Kennedy showed up. Except for Emanuel’s booze problem and the cemeteries all over the place.” 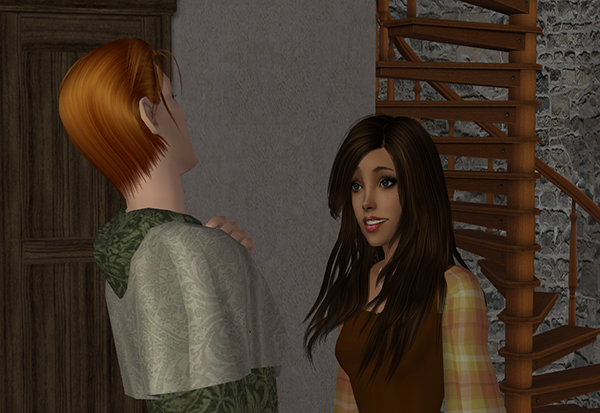 “That is more or less the Crestian way, work, work, work so that the bad of the past cannot catch up to you.” Master agreed, slipping off the bench to stand facing Lady. The smell in the room had changed slightly, Thaniel didn’t like it, that smell. Though neither Master nor Lady seemed to notice. 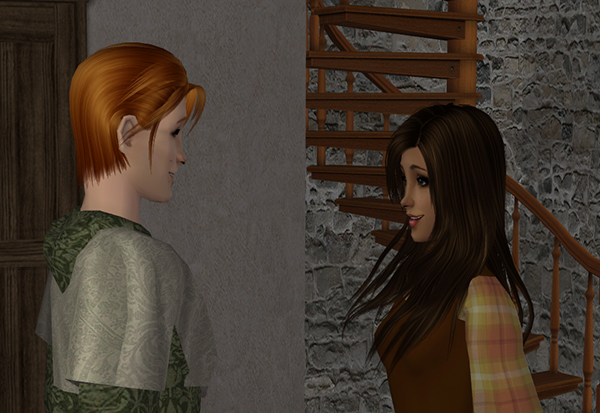 “Well, I guess we needed stiff somethings.” Master took a step closer to Lady, and the smell jumped. Thaniel wrinkled his tiny nose, if they kept this up, he’d have to go for food, or maybe wriggle through the bars and go play with the skunk.

“And everything else was taken?” Lady batted her lashes at Master. Yep, definitely had to go somewhere else. Neither Master nor Lady noticed as he made his way to the back door and pushed it open. 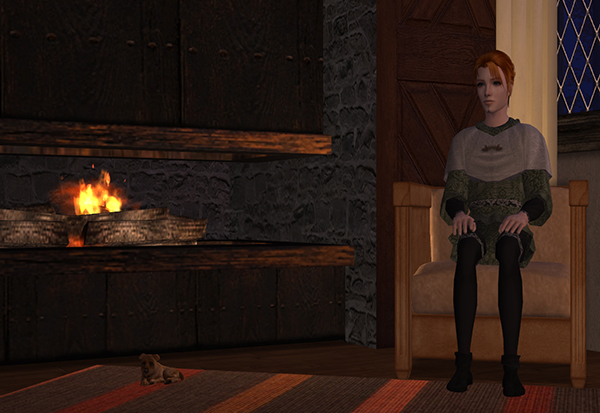 “At least Zahrah doesn’t tell me my house is cute.” Master said. “You are supposed to be cute.” Thaniel wagged his tiny tail looking up at Master. Cute was good, right? “A house is supposed to be impressive, opulent, intimidating even. But no, that smug little chit gives me a house that’s cute and then tells me it suits me.”

“If even Lady Zahrah can tell that my house is hardly more than a shack, then something is definitely wrong. I’d bet, even after our falling out, my father would be horrified to see me living in this. I’ve got the blood of kings, and the house of a back country squire.” Master snarled. But he wasn’t snarling at Thaniel, at least Thaniel didn’t think so. He seemed to be snarling at the rug, but why?

Rugs didn’t make houses. Rugs did less than Thaniel did. Some day Thaniel would be able to do more–when he grew into his feet–and the rug would still be a rug. 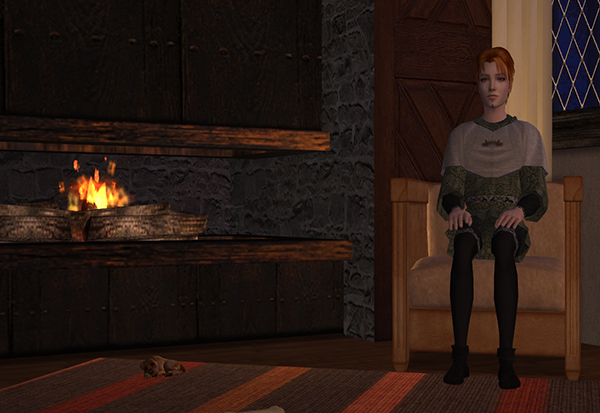 Master kept muttering, but it was getting harder and harder to pay attention to what he was saying, the fire was warm at Thaniel’s back, and beyond the sound of Master’s muttering, the sounds of popping wood and crackling ash, night birds and crickets wove together like the strains of a lullaby and before the puppy knew it, he was off to sleep.

Gray had always preferred to think that he was cautious, not paranoid. Surely there were more important things than if Tate showed up to work one day. But the thing was, Tate always showed up to work. Unless the king gave him the day off, Tate was there, sick or well, no matter the weather. If he was too sick to work, he let Lock make that call, he never made it himself.

So when Gray had arrived, mid morning, with a stack of paperwork the size of a small child in tow and Dumpling hadn’t been in the stables, Gray had thought it odd. But not entirely remarkable, after all he could have taken the horse to run an errand for Lock or something. But when Wesley had come in with a rather sad luncheon of leftovers and told them that after the meeting he would go down to Master Jarrett’s and speak with Olivia about coming up to the castle to cook dinner that night, a spark of worry crept through Gray’s veins.

Tate not only wasn’t there, he hadn’t been there all day. Gray’s father, what felt like several lifetimes ago, had told him that being a steward was half answering questions and half asking them. Sometimes men didn’t show up for work. Finding out why was the steward’s job. But usually the ones you had to question were the ones with a list of excuses as long as their arm for why they weren’t at work. Not the ones who always were. 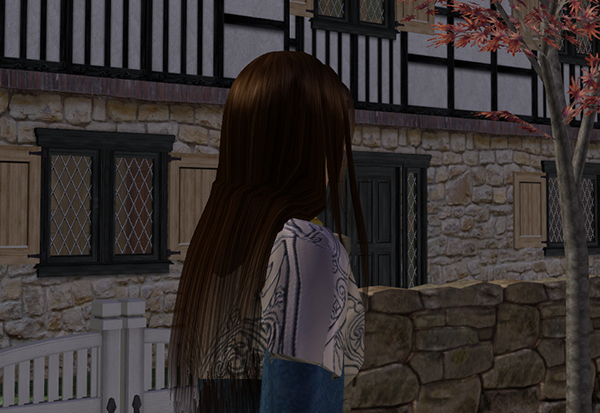 Tate lived alone, except for a cat. A dog you might train to go for help, a cat–well no one trained a cat–there were any number of things that could have happened, fire, head injury, he could have been thrown from his horse, or kicked, something could have fallen on him. And unless someone came along in time…

Gray had excused himself from the meeting, which was just a bunch of diplomatic bullshit sent from Archerglen and had headed down the hill to Tate’s. The house was still standing, seemingly untouched, but silent as a grave. No sign of Tate in the garden or out front.

He paused, for a moment, hand on the familiar wooden gate, but he heard nothing. “Tate?” Gray called. All that answered him was a faint echo of his own voice. 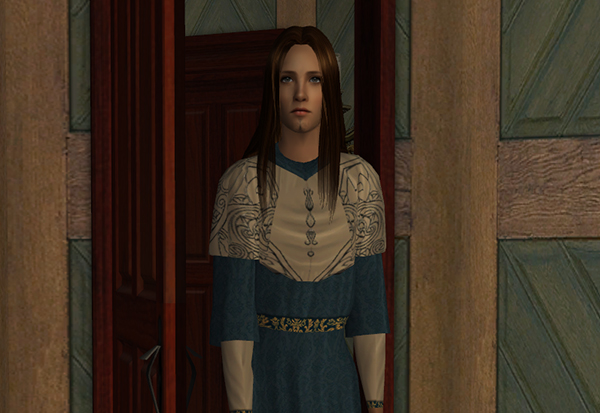 The door hadn’t been locked, that meant that Tate was still home. He always locked the door when he went up to the castle, even if Gray wasn’t certain why. But every room in the house was empty of anything living.

The barn, maybe? The snickt of the door closing behind him, seemed very loud as did the rustle of the thatch in the breeze. 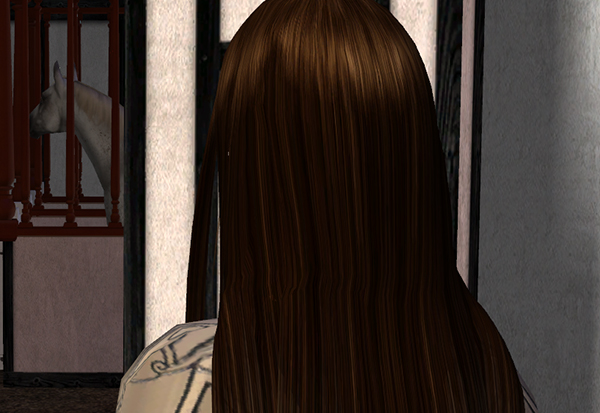 Butterscotch appeared in the doorway of the barn and twined around his ankles. Dumpling was still in her stall, but nothing looked out of place. Something had been going on with Tate since Lord Dolph’s wedding, but none of them knew what it was, they’d all chalked it up to him being a teenager, most teenagers were moody and sullen at times. But what if there was more to it than that. 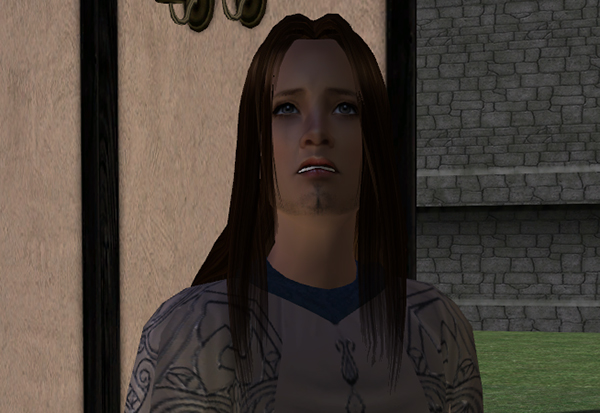 He stood up when a sound caught his ear. It was a cry, the sound of something in pain. “Tate?” Gray asked, peering into the semi-gloom of the barn. The sound immediately cut off. If it had been one of the kittens, the sound would have gotten louder, not stopped. Dumpling danced in place and Gray stepped further into the barn. 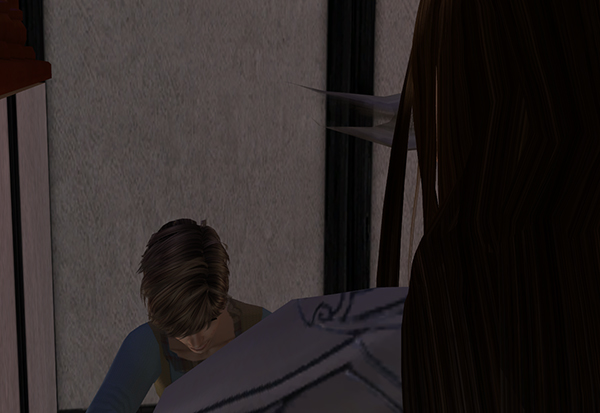 “Tate, what’s wrong?” Gray didn’t remember moving into Dumpling’s stall or kneeling in the straw that was pristine as fresh snow, or his hand falling on Tate’s shoulder. 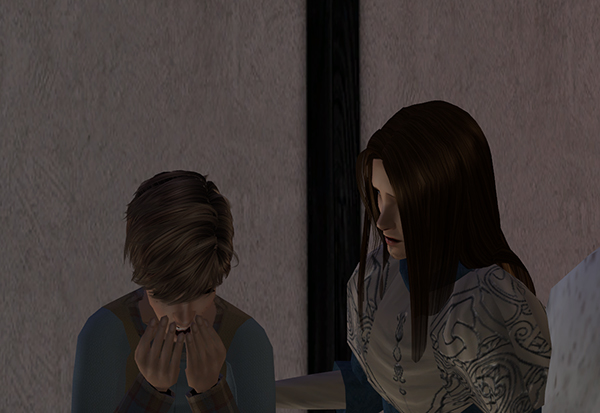 Tate scrambled back, to his feet, ducking his head in something that was more of a cringe than a bow. “Lord Gray, I am so sorry. I-I-I…” That was all the further the boy got before his words disintegrated into sobs, though he didn’t actually cry. Gray put his arm around Tate’s shoulder, feeling as if he were reaching back in time, there was a time when Gray had cried like this. The sort of crying that felt like your insides were coming loose from their normal places.

“No,” Gray breathed into the boy’s hair. “Whatever it is, you don’t have to be sorry about it.” Other words were ringing in Gray’s ears, further blurring the lines between then and now.

“But the–the king, he was de-depending on me.” Tate said.

“The king can manage.” 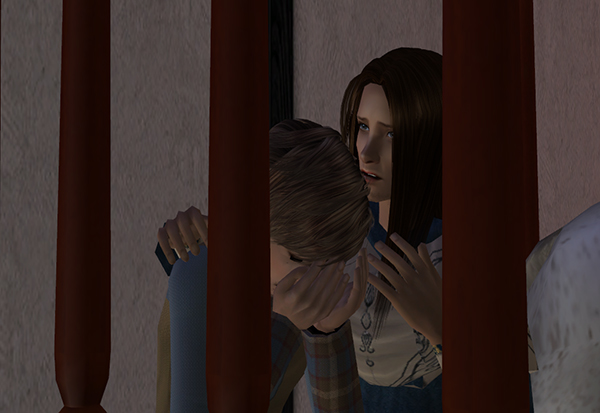 “Just–just give me a minute to clean up, I’ll be–I’m sorry you had to come after me I-I-I promise it’ll never happen again. Never.” Tate said into his hands.

“No, Tate, the only place you’re going is to see Lady Kennedy.” Gray said. Tate wailed, the first sign of a tear appearing at the corner of his eyes.

“No, please! I-I can’t–not to Lady Kennedy’s. The–the–she’s there.” The hysterical note in Tate’s tone, though the words made little sense, told Gray that whatever had lead to this was in some way tied to someone at Lady Kennedy’s. 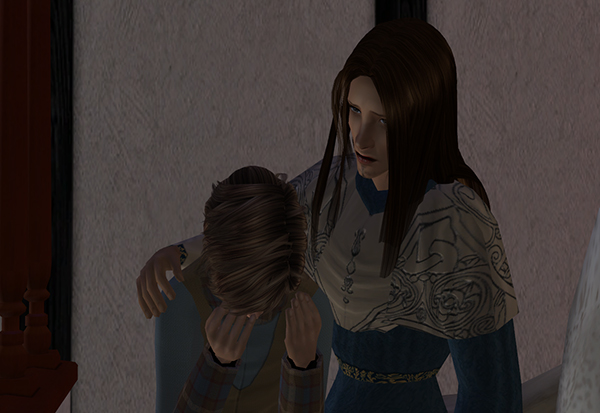 “Okay. To my house then. I’m not leaving you here, Tate. And I’m not going to take you to the castle until she’s seen to you.” Gray said firmly.

“I’m not hurt.” Tate protested, sounding more like he was trying to convince himself than Gray. “Nothing–nothing’s wrong, nothing happened.”

“Tate.” The boy only whimpered. Oh Tate, what happened to you? 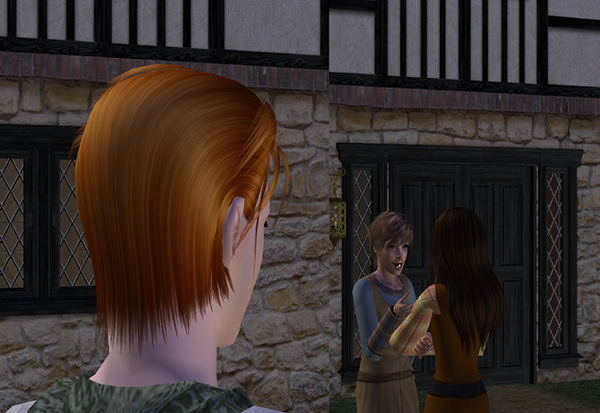 6 Responses to I’ll Be There