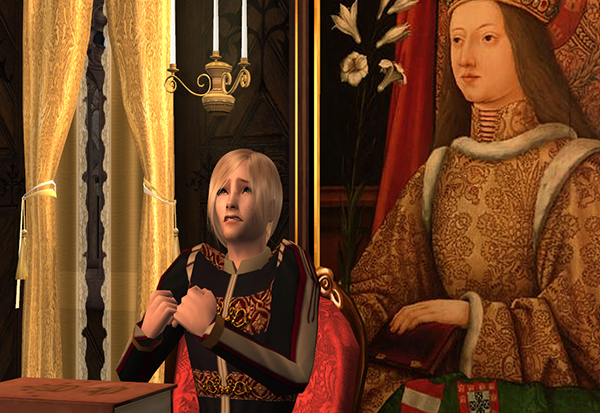 That couldn’t have gone worse if I’d been trying. Lock thought as he stared at the candle flame. He owed it to Tate to handle this well. He hadn’t been able to spare him this, he hadn’t been able to make it better and now he’d just made it exponentially worse. And what if Alistair went over to Gray’s. Gray wasn’t there.Why hadn’t he had them bring Tate to the castle? Why hadn’t he gone over to Gray’s and warded the place before he talked to Alistair. 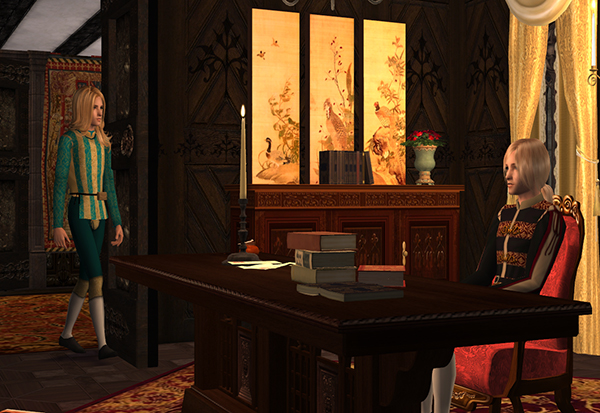 “Oh damn.” Lock pushed the papers on his desk around trying to remember where he put those plans that Tiffany had given him for the inn.

“Does it have anything to do with Alistair taking off out of here like a bat out of hell, looking like he was about to shit himself?” Tiffany asked from around Wesley’s shoulder.

“Oh, yeah.” Tiffany said as Wesley nodded. Of course he did. I told him I was going to turn him into a pig and then had my wand out pointing it at him. It hadn’t been his finest moment.

“You told him you were going to turn him into a pig? Right on!” Tiffany laughed delightedly. He blinked. He hadn’t realized he said that outloud. “He so deserved it.” Lock’s stomach dropped. 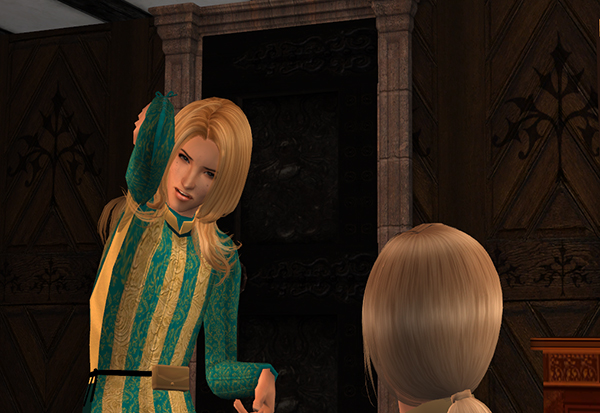 “You know?” Lock asked in a small, sick voice.

“Know what?” Tiffany looked at Wesley who shrugged.

“Tate?” She asked blankly. Lock blinked again. Maybe she didn’t know. Maybe he hadn’t fucked this up that badly yet. “I dunno what he did specifically, this time, but I do know he couldn’t be more of a dick if he had a circumcision scar on his forehead.” Lock looked at Wesley who shook his head. 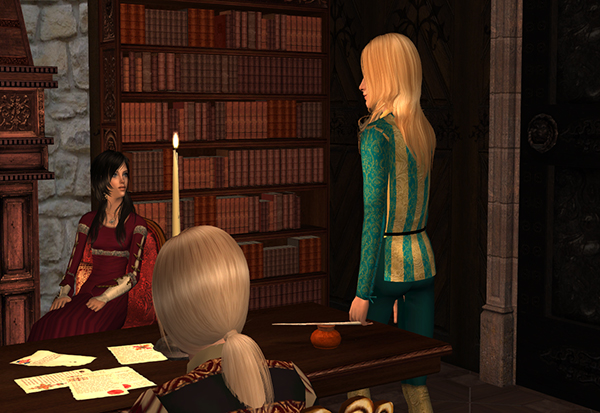 “You’re not going to look very kingly if you have a hole in your lip from chewing on it.” Tiffany told him blandly. “Is there any particular reason you threatened to turn Alistair to a pig?” A denial immediately jumped to his lips, but what was the point? Both Tiffany and Wesley knew him better than to believe the denial, even if he posed it.

“Will you both keep this quiet? For Tate?” He asked meeting first Wesley’s gray eyes, then Tiffany’s blue ones. Wesley nodded,

“I–tried very hard to keep a cool head, I mean Gray told me some pretty horrible things that Tate told him that Alistair did and said. Then I went to Gray’s, to try and talk to Tate. I–I know that Uncle Phillip certainly wouldn’t have meted out a punishment for hearsay. But Lady Kennedy didn’t think it was a good idea for me to talk to Tate, he was finally calming down after having told her and Gray what happened. So I decided I would talk to Alistair and see what he said.” Lock bowed his head. 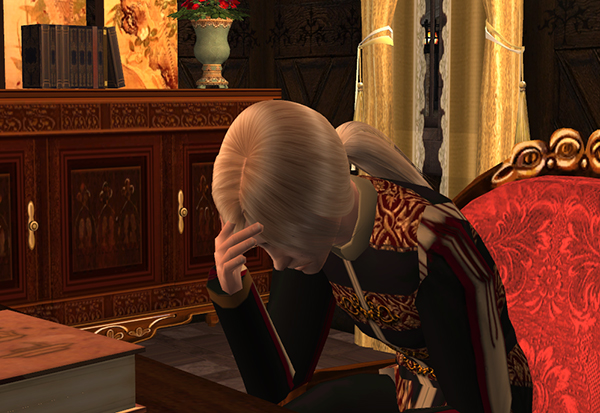 “And he stood there.” Lock gestured across the desk. “And I asked him–in the stomach-churning detail that Gray had related it to me in–if he had–sexually assaulted Tate. I–I think that’s what Lady Kennedy called it. She said he didn’t–force himself into Tate, but she definitely would say he probably forced himself onto Tate.” Lock looked up. Wesley looked horrified and a little sick.

Tiffany–Tiffany just looked distant, her face completely shut down, except her eyes. Those sparked and burned like the heart of a flame. Lock went back to contemplating the floor between his boots.

“What did he say?” Tiffany asked after a few moments.

“He said that–it wasn’t–it wasn’t an assault because Tate didn’t say no.” Lock heard the shaky disbelief in his own voice over Wesley’s incredulous gasp. 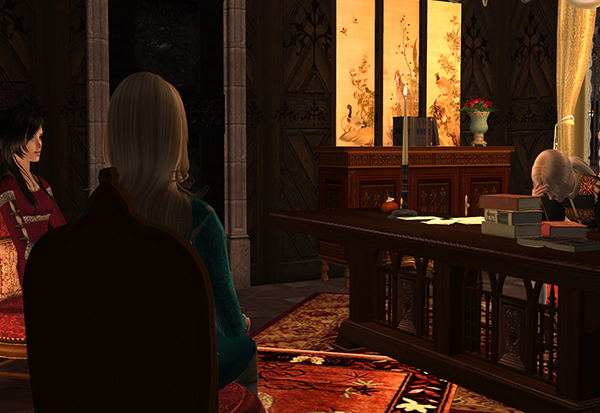 “He said that if Tate had ever actually said anything, told him to leave. He would’ve, but he didn’t and–so he didn’t see what the big deal was.”

“Has he done this kinda thing before?” Tiffany asked. Wesley sighed.

“Who knows what all he’s done.” The knight admitted. “He was always a gaol lawyer, someone who knew exactly how far he could go without getting into trouble. He could come within a hairsbreadth of breaking any rule without actually breaking it. But he always walked away cause he didn’t do it.” Lock nodded without looking up. 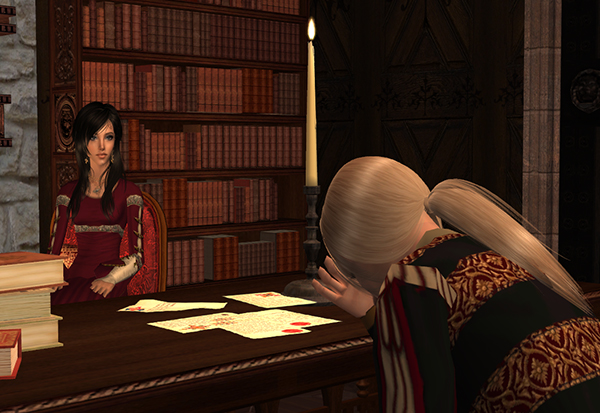 “He told me that he was just trying to give Tate a chance with Lady Zahrah. And that maybe–maybe it was even something Tate w-wanted.” Lock’s voice broke. “I have to admit, I didn’t handle it well. After listening to what Gray told me and what Lady Kennedy said. To have him stand there with that insufferably smug you-can’t-do-anything-to-me-for-this look on his face. I lost my temper. I had my wand out before I could even think about it. I was halfway to turning him into a pig and I didn’t even think about.”

“Well, you’re still better than me, cause if I’d been you, he’d have been oinking AND ball-less before I stopped to think about it, Lock.” Tiffany said. He raised his head and stared at her. 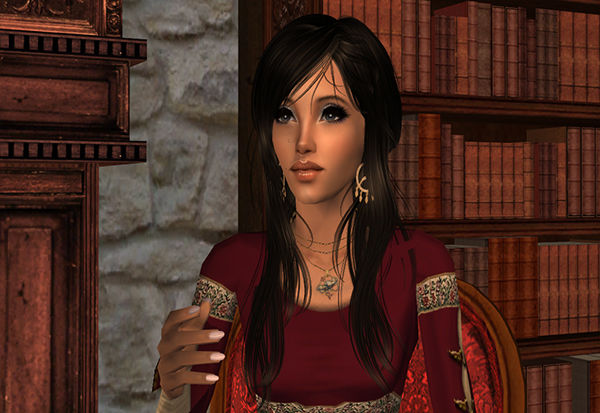 “I don’t lose my temper often. I’ve got a much longer fuse than say Kennedy does, but when I lose it–it’s gone and I’m usually standing in the middle of a fallout zone when I do. Everybody loses their temper sometimes.” Tiffany said.

“You’re still human, Lock. Yes, you’re the king. But that doesn’t mean you need to be Superman. Tate’s a good kid and having a squirrel-fucker like Alistair stand there and tell you he might’ve even wanted it? I’d be more pissed at you if you didn’t go off on him, Lock, than I’ll ever be because you did.” Tiffany said with a toss of her head.

Lock processed that for a moment. “…Superman?”

“Literary creation. He was strong and fast and, you know, could pat his head and rub his tummy at the same time. He was Superman, able to leap tall buildings in a single bound, faster than a speeding bullet, stronger than a locomotive. The point is–when you didn’t have kryptonite with you, going up against Superman was asking to get your ass kicked. I still never liked Superman much. Me I was more of a Captain Kirk sorta girl, sure he was a man-whore, but his whole crew would have followed him into the sun. Even all those sad red shirts.” Tiffany paused. “Never mind. Anyway, somehow Kirk managed to be both human and a good leader. Superman was so awesome by himself why did he need anyone else. There’s nothing wrong with being human.” 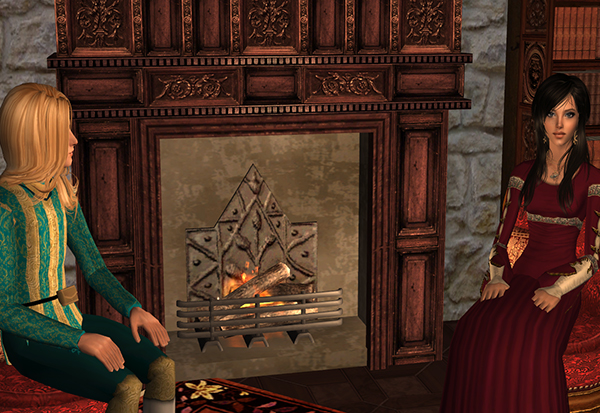 “My uncle would have known how to handle this.” Lock muttered to the floor. He heard a swish of hair across fabric, as if Tiffany and Wesley had turned to look at each other.

“You’re fucking kidding me, right? Lock, what the hell makes you think your uncle would have even known this happened to someone like Tate.”

“Eh?” Lock finally looked up and Wesley was nodding.

“She’s right, Lock. King Phillip was a good man, and no, he probably wouldn’t have threatened to turn Alistair into a pig. But he wouldn’t have because he wouldn’t have cared that a nobleman talked dirty to a servant either. You did what you did cause you care. You care about Tate and someone hurt him. And then he–,” Wesley trailed off, obviously looking for words.

“Tried to cheaply justify doing wrong. Because he could.” Tiffany finished for him. Wesley nodded in agreement.

“Just how am I supposed to sit here and hate myself with the two of you around?”

“You aren’t.” Tiffany stuck her tongue out at him.

“If there’s anything I think your uncle would criticize about how you handled this, Lock, it’s that you are hating yourself for what happened.” 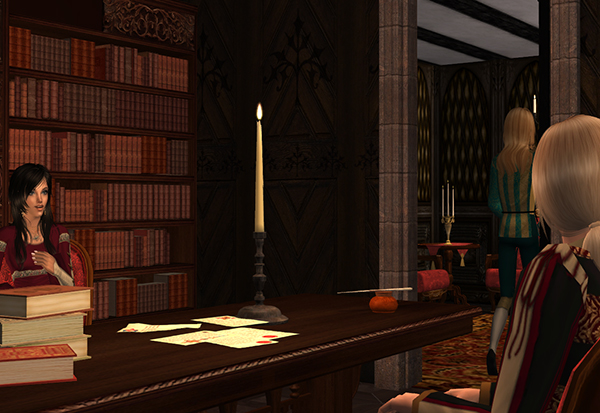 “Right. Often wrong, never in doubt.” Tiffany said. And Lock nodded. “I mean this isn’t getting that inn approved, you know.” Wesley smiled and stood up and headed out the door.

“Aye, my lady.” Tiffany smiled and slung the roll of paper by her feet up onto the desk. “So I’ve been thinking about that courtyard issue.” Maybe they’re right, he thought as Tiffany pointed out lines that made only passably little sense to Lock. Maybe it isn’t never falling down that makes the king. Maybe it’s the getting back up.

4 Responses to The Line