Just A Matter Of Time

The problem, as Raquel saw it, with being the sole teenaged girl in all of Shadowcrest was one she never anticipated. How could you sit there, day in and day out looking at your roommates, five beautiful, confident, damn near airbrushed-model-flawless women and not see how much you didn’t stack up. They’d already grown into their features and personalities. They didn’t sit there and worry about whether their noses were too big, or their busts not big enough. 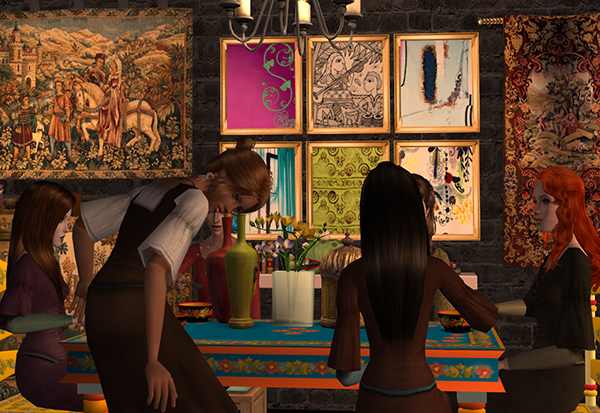 And there wasn’t even anyone she felt like she could talk with about stuff like that. How could you go up to Peyton and talk about not feeling confident? No, Peyton didn’t follow the feminine trappings but she was like-like Katherine Hepburn. That short platinum hair and make-up less look was her signature. And to hell with everyone else if they didn’t like it. 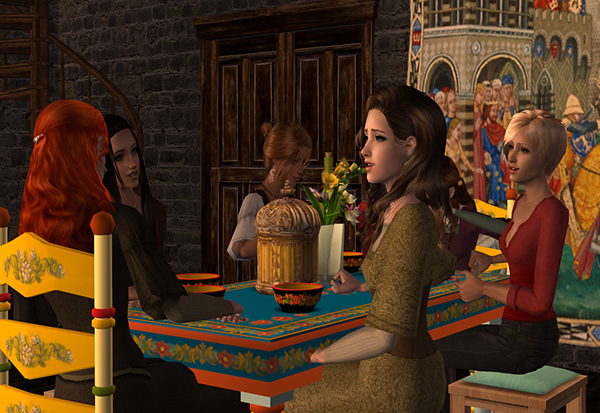 Of course Sawyer would be head over heels for Jolene! Jolene was stunning. She was a lady, strong and capable but still a lady. Why couldn’t she be more like that? Instead of tripping over her feet, still too skinny. 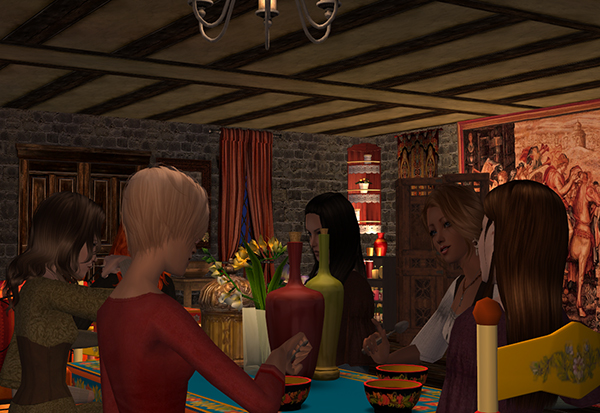 Well, yeah, Kennedy was brash and no-nonsense, abrasive even, but she didn’t let anyone tell her what to do or who to be. She could keep her head up no matter how many times she might take one on the chin. And nobody scared her, nobody! Some days Raquel felt scared of her own shadow. She would never be able to stand up to Lachlan the way that Kennedy did.

Or to have done what Kennedy did to Jarrett!

To add insult to injury, she had that deep tan skin and those deep stormy blue eyes that reflected her mood. Raquel couldn’t tan with a bottle of self-tanner! And her eyes were just a blah green, not even a pretty green.

Tiffany was so competent and funny, and pretty. And Raquel coveted Tiffany’s hair, which always laid so pretty, where hers liked to get frizzy and it was a blah brown. Tiffany could design buildings. Buildings! Raquel couldn’t do anything like that. Day late and a dollar short, that was what she was.

Even Heidi, who was such a sweetheart that you just couldn’t hardly be jealous of her. Except Raquel was. She was beautiful, that perfect, even, just a little bit freckly skin. But even more than her looks, she was nice to everyone, even Alistair. And nobody was nice to Alistair. He was the asshole of the year!

When everyone else was wrapped up in their after dinner activities, Raquel snuck upstairs and changed into her pjs. If anyone came up, she could pretend that she was just tired and had wanted to go to bed early. With the make-up washed off her face, Raquel’s features took on their regular bland countenance. 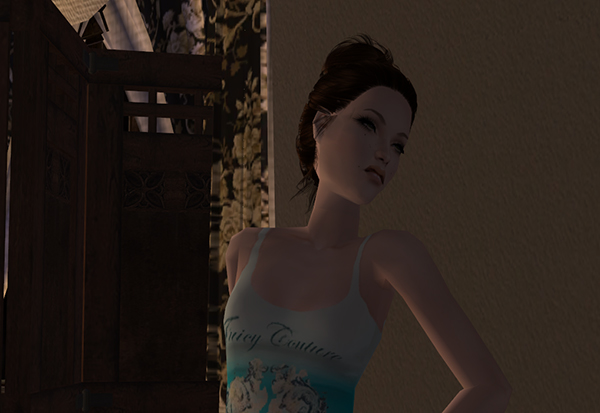 Hopeless, that’s what it was. Completely hopeless! Why would Blake want to marry me? She thought as her reflection wrinkled it’s nose. I’m nothing special, nothing at all. He’s gonna find that out and then it’ll be too late! He’ll be stuck with me.

She could hear footsteps on the stairs and hurried over to her bed, sitting down on the edge, trying to school her features to looks sleepy. 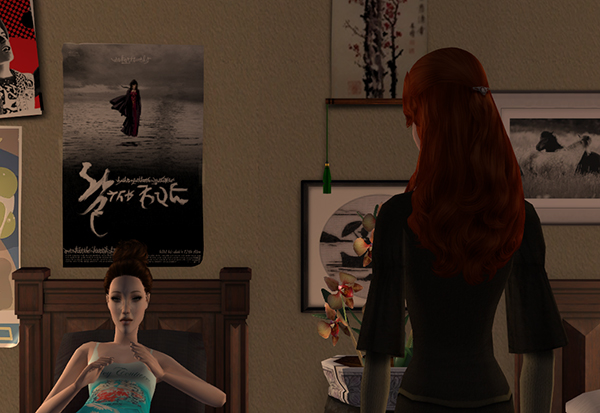 “Hey, you hurried off so quick, I was worried.” Heidi said stopping in the empty space between their beds. “Tired?” 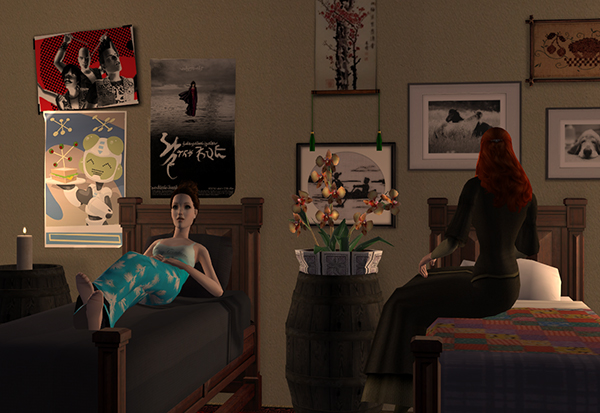 “Yeah.” Raquel looked down at her hands, the lie was easier to tell if she wasn’t looking at the person she was trying to lie to. Hopefully that’d be good enough and Heidi wouldn’t stay and talk. But luck didn’t seem to be with Raquel in that either, cause Heidi sat down on her own bed, fluffing the pillow.

“Wanna talk about it?”

“No, what was keeping you quiet during dinner, what made you hurry upstairs away from us right after.” Raquel shot a look at Heidi, whose dark brown eyes looked sable in the candlelight, soft black and full of concern. “You worried about getting married? Blake’d wait if you asked him to, you know.”

“I shouldn’t be marrying Blake anyway.” Raquel’s hands clapped over her mouth as if she could shove the words back in.

“Do you not feel ready?” Heidi asked.

“No, it’s just Blake is so wonderful, he’s kind and he’s sweet and he’s a good friend and a good man, and he deserves somebody just as wonderful. And he’s gonna get me!” Her traitorous mouth poured out to her horror. “He deserves so much better.” She whispered.

Heidi was quiet for a long moment and Raquel’s stomach fell. I’m even worse than I thought, even Heidi can’t jump to my defense.

“So, if I buy that, do I get a beach house on Mount Shadow too?” Heidi asked.

“There aren’t any beaches on Mount Shadow.” Raquel said, puzzled for a moment.

“Exactly.” Heidi said. “I find it a little hard to buy that you’re not worthy of Blake, too. He adores you. Maybe he doesn’t go hiking across the city to serenade you in a blizzard, but only cause he’s not as-silly as Sawyer is sometimes.” Heidi shook her head. “He would if he thought it would impress you.”

“I’m just…” She couldn’t say afraid, she wanted to say afraid but she couldn’t admit that. “I was trying to figure out what I wanted to do with my hair and my makeup, for-for the wedding and everything I did looked like ass! I look like a freak.” 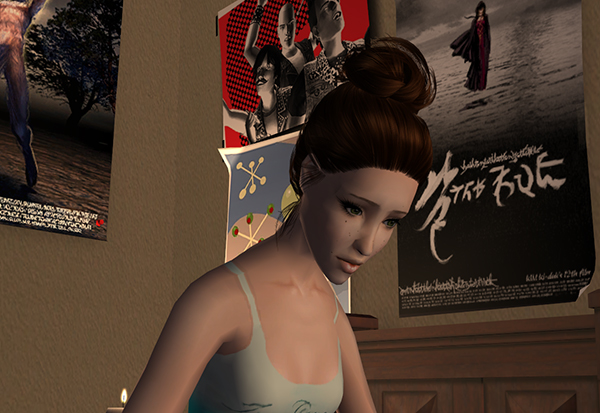 “It looks like I have some sort of disease on my face.” Raquel said, sitting up and staring down at her lap.

“Who said that?” Heidi asked.

“Alistair.” A glance at Heidi showed the redhaired woman’s lips tightening as if she’d bit into something sour.

“Well, that figures.” Heidi shook her head. “Why don’t you show me what you were trying, if you’re not happy with it, maybe I can help you make it better.”

“You don’t have to do that.” Raquel protested.

“Have to, no, want to, yes.” Heidi said with that shy, wonderful smile. Raquel stood up and gathered her make-up from the box under her bed. She marched over to the mirror and applied it just as she had earlier. And just as it had earlier, she looked like she should have been sporting a rainbow wig and a big red nose. 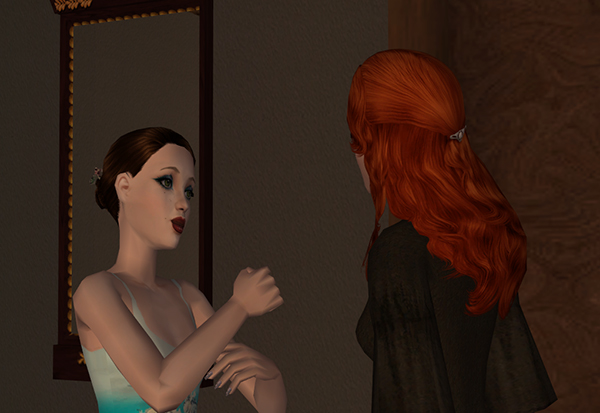 “See!” Raquel shook her head. “Would you want to wake up next to something that looked like that.” She gestured up at her face.

“Sweetie,” Heidi said putting a hand on her shoulder. “It’d flip me out to wake up sleeping next to any woman.” 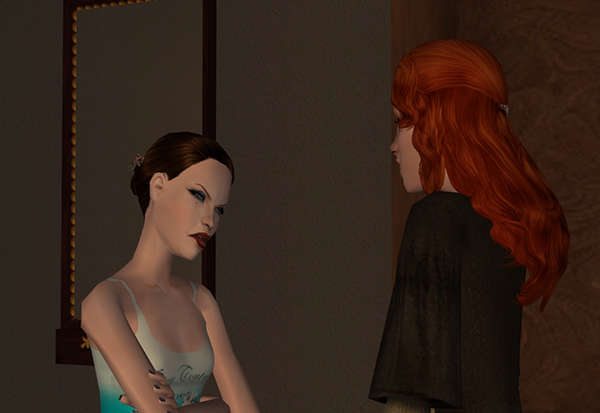 “That’s not the point!” Raquel shook her head, her features twisting. “You didn’t even tell me it’s not bad.”

“It’s not what I would do. But I’m not you.” Heidi told her. “But that doesn’t mean that it looks terrible.”

“Well, I know that pairing a strong lipstick with a strong eyeshadow on pale skin can be overwhelming. I know rules are made to be broken, but there was a reason why it was a ‘rule’ for so long.” Heidi said, then cocked her head to the side. “I think that the eyeshadow might look less overwhelming if you wanted to use a lighter lipstick.” 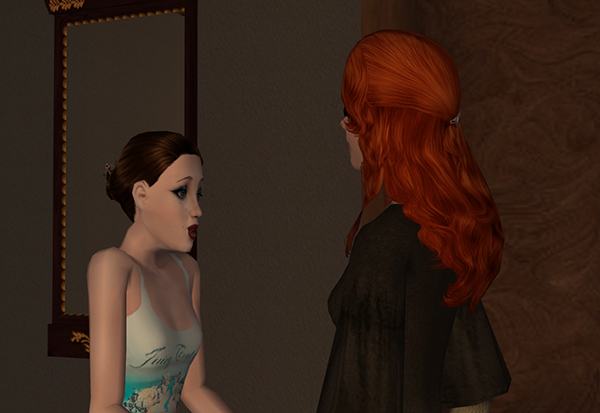 “But aren’t ladies supposed to have red lips, like Snow White?” Raquel asked.

“You mean like ‘medieval ladies’ or do you mean like ‘faerie tale ladies’?” Heidi asked. “Is that how you want to do your hair?”

“My hair’s wrong too?” Raquel asked in despair.

“Not wrong. There isn’t a wrong here, Raquel.” Heidi said. She looked at Raquel for a long moment, something passing over her face. 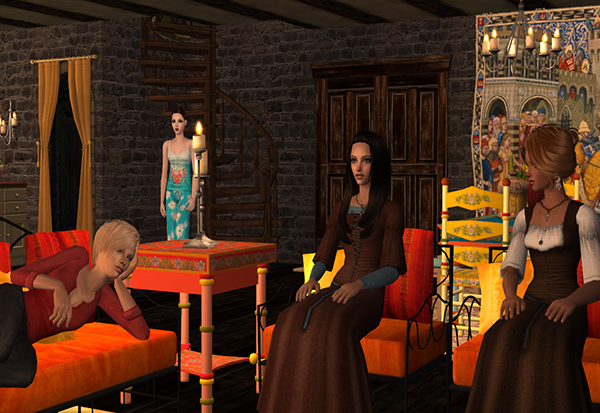 “C’mon, let’s go downstairs where the light’s better, we’ll try something.” The other women were sitting around the fire, Jolene a book in her hand, Kennedy telling Peyton to get her sneakers off the sofa, Tiffany just looking into the fire. They looked up and over their shoulders at the girl in her pajamas and overly made up face, but no one said anything and Raquel felt her stomach twist. 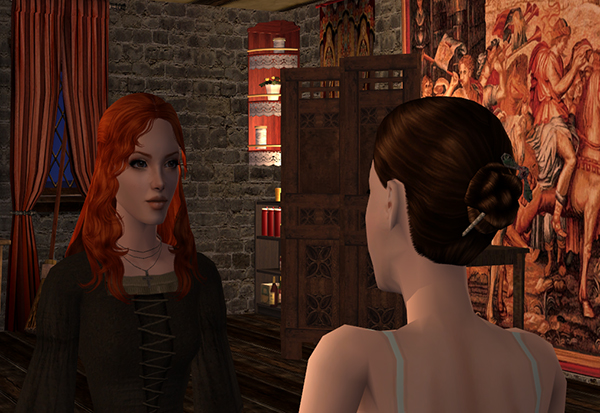 While dinner was attempting to climb back up Raquel’s throat, Heidi had moved two of the dining room chairs to face each other and waved Raquel into one and took the other. She first made quick work of removing the make-up from Raquel’s face and then applied other stuff, muttering to herself. After what felt like it must have been hours, but couldn’t have been that long cause no one even had to go poke at the fire in that time, Heidi stood and took down Raquel’s hair. 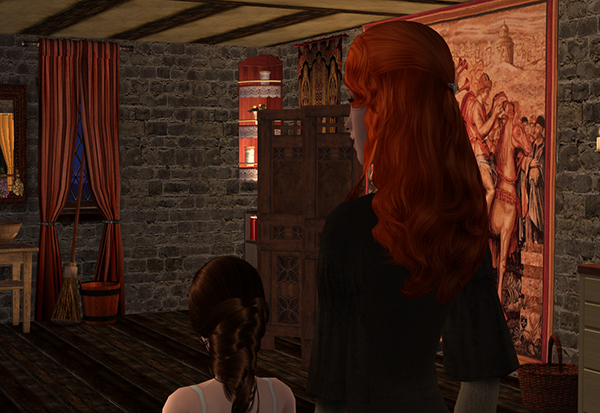 For a long time, other than the soft murmur of conversation and the softer crackle-hiss of the fireplace, there was only Heidi’s competent hands, working on Raquel’s hair, twisting and twining the strands. 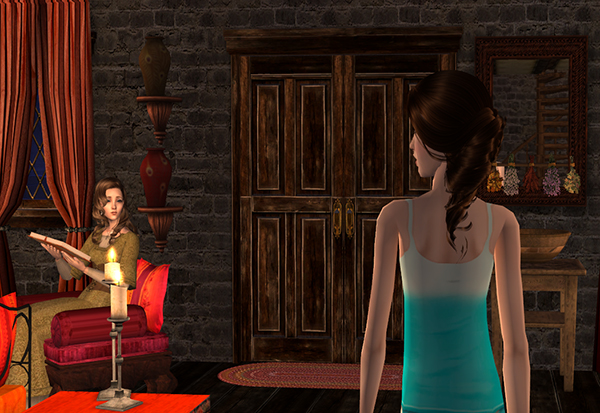 “Okay, now, go to that mirror over there, and tell me you look like a freak.” Raquel, did as Heidi told her to. Her stomach still roiling and twisting. Jolene looked up from her book, an unreadable expression on her face and Raquel wondered if she was actually going to make it to the mirror-and the bowl under it before she threw up. 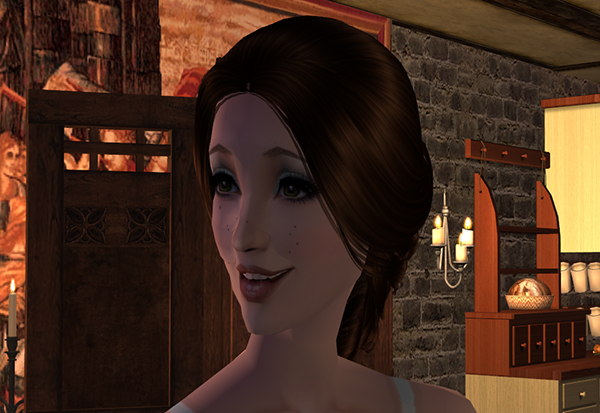 “Oh…” Raquel said when she did see her reflection. Maybe she still wasn’t as pretty as some of the others, but-no. She definitely didn’t look like a freak.

“Is that a good oh or a bad one?” Heidi teased. 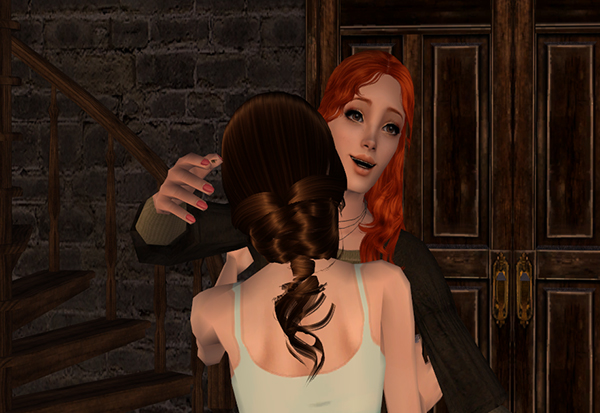 “Thank you.” Raquel said, hurrying back over to where Heidi stood and giving the other woman a hug. “Can you do it again?”

“Anytime.” Heidi patted her back. 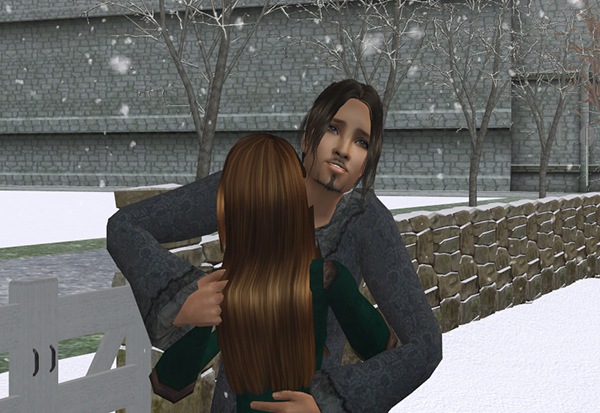 Heidi might have meant that, but Raquel didn’t want to press her luck. Still, the next day, while she was waiting for lunch, cause Blake was supposed to be coming for lunch, she tried something a little different with her make-up and hair. But somehow, once she caught sight of Blake coming in the gate, all of her confidence fled her, and she rushed out to see him, burying her face in his chest. 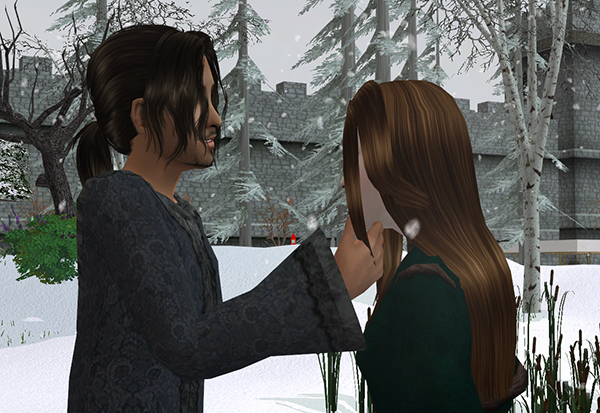 “What’s wrong?” He asked. She shook her head. She couldn’t tell him. what if he didn’t understand-or worse yet, what if he agreed. He tipped her face up to look at him. But that was the chicken way out… 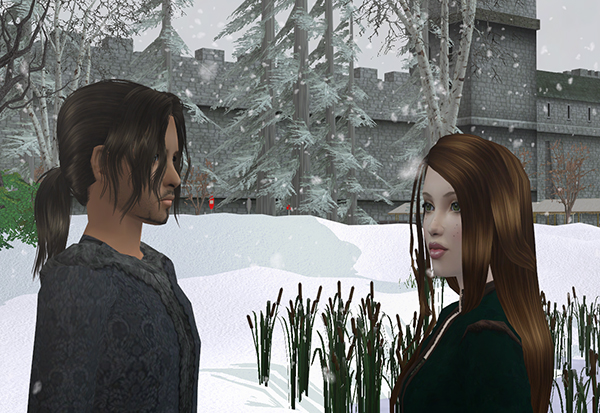 “Don’t.” She found herself murmuring. Puzzlement crossed the young carpenter’s face. “I wanted to look-pretty-you know-for the wedding, but I can’t. I can’t be the kind of lady you should be with.” 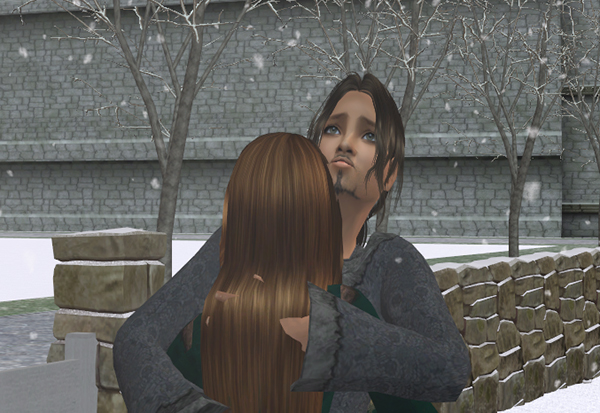 “You deserve someone better.” She said, starting to try and pull away.

“Impossible.” He murmured in her hair, tightening his hold on her.

“‘Cause there isn’t anyone better, not here, not anywhere.”

2 Responses to Just A Matter Of Time