Dunno If I Can Face 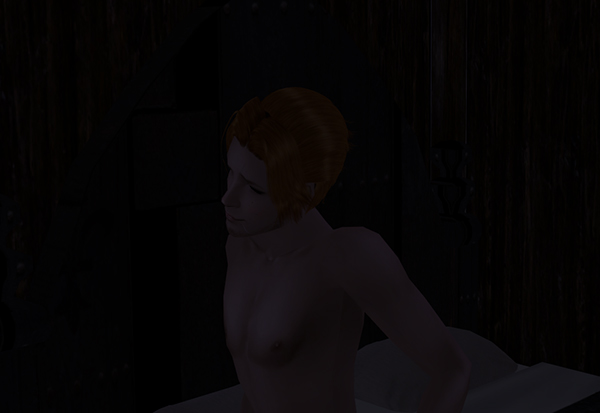 Dawn was still not even a promise of lightness in the sky when Emanuel woke up. What woke him or why he couldn’t say, while drinking enough usually guaranteed he’d end up horizontal at some point, it didn’t necessarily mean that he’d sleep well or for very long. He stretched and sighed and stared off into the darkness.

A careful stock showed all the usual symptoms, throbbing head, dry eyes, muscle aches, it felt like someone was doing an elaborate court dance on his stomach and the very thought of food made him cringe. However, his head wasn’t as bad as it could have been, yesterday had been–some saint’s day, and he’d had luncheon and dinner with Fox, which meant no wine. Not only did Fox never serve wine, Emanuel wasn’t even sure if he drank it, he didn’t serve anything stronger than small beer on holy days.

Fox was a good man, a better man than Emanuel by far, and he never doubted that he was very lucky to have a man like Fox for a friend. But sometimes it would be nice to sit down to something more than a bread and water starter.

It was never as much as on a holy day that Emanuel missed his mother. Leah had been a stout woman with his flaming hair and flashing grey eyes, but her meals could have put King Philip’s cooks to shame. And it was hard to sit down to Fox’s heavy oat bread with a tin cup of water on the side without remembering his mother’s kitchen with the heavenly smells and her orange and nut bread and her hard cider that kicked like a mule. 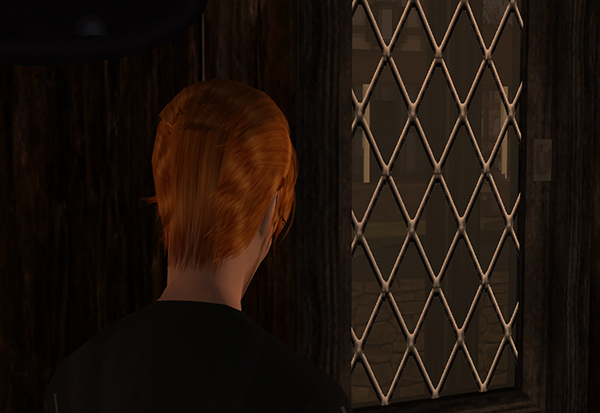 Somewhere in his reminiscences, he got out of bed, dressed, and went out into the main room of the cottage. Absently picking up the book he’d carelessly left on the floor last night, returning it to the shelf. Then he found himself drawn to the window like a moth to the candle. Whenever his mind wandered he found himself at the window.  You could, from here, just barely see the edge of Lake Haven between Blake’s house and Fox’s.

Lost in his thoughts, dawn soldiered on without him, bringing a somewhat cloudy morning and a visitor to his front walk. He heard the gate shut and went to the door. It wasn’t that late, but he knew that Fox would already be at work. Ren probably as well. Blake was probably still asleep, that was one of the arguments that he and Fox had had a lot when they had all lived together. Fox thought that everyone should get up at the crack of dawn, Blake preferred to work later into the evening and sleep later into the morning. 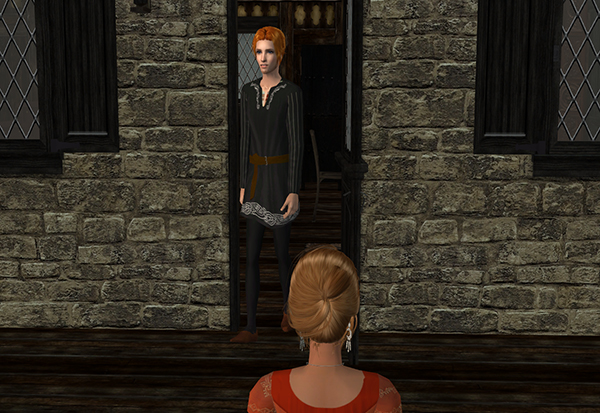 So who would be wandering up his front walk at this hour? He was greeted by a pair of piercing blue-gray eyes and caramel hair, falling out of it’s arrangement already, when he opened the door. What was Lady Kennedy doing here at this hour? 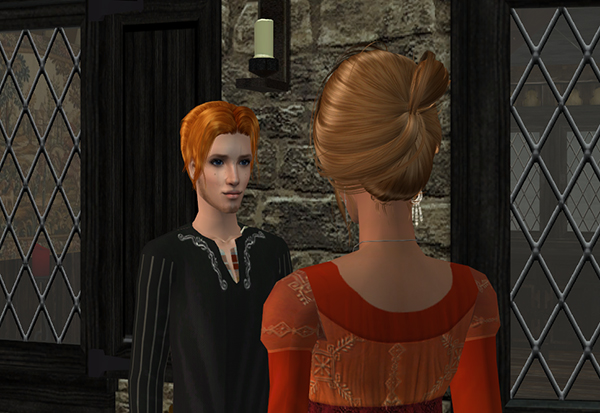 “So, shall we wake up the neighborhood, Master Apothecary?” Her voice was brisk, it sort of sounded like an early winter morning felt, crisp and chill, but not frigid–yet. A hint, perhaps of snow on the horizon.

“Yes, I have some scolding to do, we can either have our inevitable screaming match right here on the front porch or we can go inside and maybe not startle all of the early birds out of the trees.” Well, put that way. He gestured toward the house. 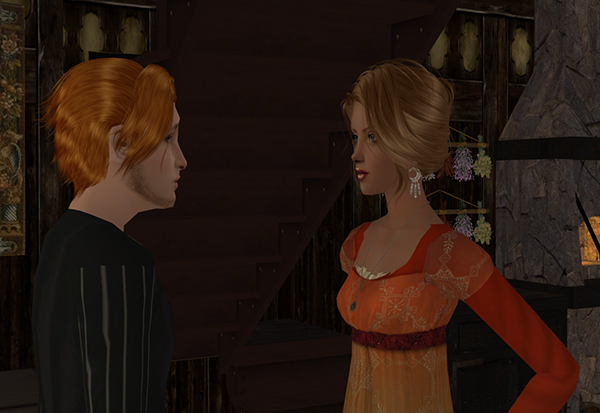 “After you, m’lady.” Emanuel said with a little bow. They didn’t get very far into the house. He’d hardly closed the door when he turned to find her, hands planted on her hips, stern expression that would probably soon become a glare, just under the stairway.

Trying hard not to shuffle like a schoolboy expecting to get his knuckles smacked, he approached the doctor. “Emanuel,” she took a deep breath then exhaled it. “I despair more for you than I do for Sawyer.” Emanuel blinked. “Just how many people did the plague bury? Why are you so bound and determined to see it bury one more?”

“I–I thought you said that the plague was gone.” A chill ran through Emanuel, a reemergence of the plague could crush Shadowcrest’s few survivors in such a laughably short period of time.

“It is.” Lady Kennedy said, puzzlement spreading across Emanuel’s face in the wake of the pronouncement. “I’m talking about your drinking, Emanuel. Fox said that you’ve always drank some, that he knew your parents and that they always drank some, but before the plague, you rarely took it to extremes. Now you drink yourself to sleep every night? It’s hell not being able to save everyone.” He reared back slightly, protests coming to his lips, but Lady Kennedy wasn’t finished. “I know that. Maybe I didn’t have a plague to contend with, but…” She trailed off. “But if you drink yourself to death, then you will be another victim of the plague. The plague will have buried you even if it’s your liver that fails you or you choke to death on your own vomit.” 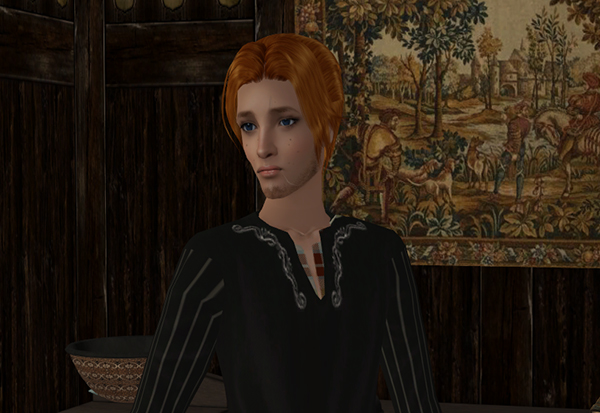 “No, Emanuel, it can happen, it has happened.” She cut him off. “One of the things that excessive alcohol can do is short-circuit your gag reflex. That’s what keeps you from choking.” She shook her head. “I wish I knew how to help you. I’m not a shrink, Emanuel, I’m a doctor. I treat broken arms, and strained muscles and the flu. Not how the fuck a plague leads an otherwise sane, responsible man to drink himself to death.” 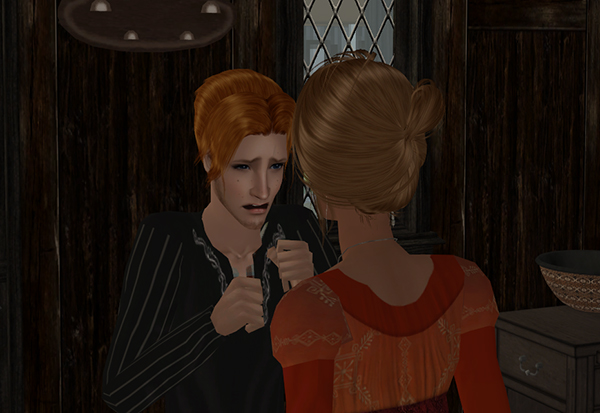 “Lady Kennedy,” Emanuel said. She looked at him for a long moment and he felt his face begin to crumple. Oh that’d impress her, now he was going to start bawling.

“Emanuel, people care about you. Fox, Ren, Blake–me, even the king.”

“Hush for a second.” The doctor said. Emanuel hushed, more because of the light in her eyes than because she told him to. “Really, how do you think Lachlan would feel if you drank yourself to death? He thinks he ought to be able to save you. The problem is, Emanuel, the only person who can save you is you. You have to want for us to help you before we can help.” 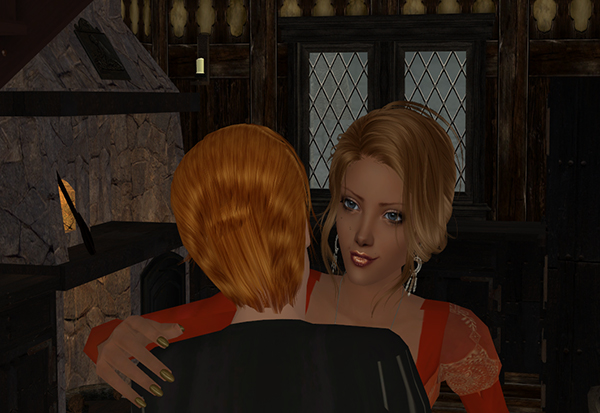 “Maybe I don’t think I’m worth saving.” Emanuel breathed. Kennedy leaned forward, wrapping her arms around him and pulling him tight to her for just a moment. She smelled like musk and spice, jasmine from the caramel of her hair.

“Well, I do, and really, Emanuel, which of us is more likely to be right?” She grinned as she released him. 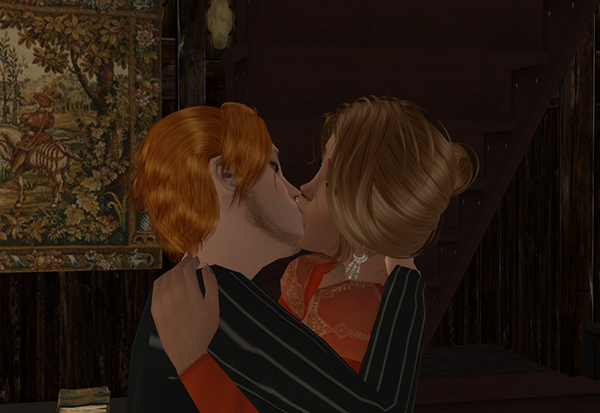 Even if you’d held a sword to his neck, he wouldn’t have been able to tell you who moved first, all he knew was their lips met somewhere in the middle. She didn’t kiss like a lady. He realized with a start. Not a faint fluttery butterfly thing, but commanding and fiery. Like comparing Fox’s small beer with a double shot of his mother’s brandy. 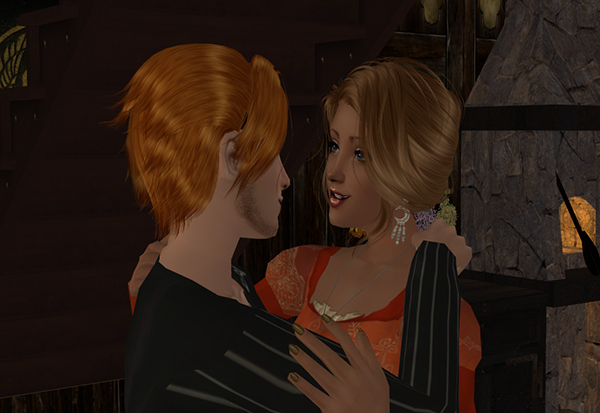 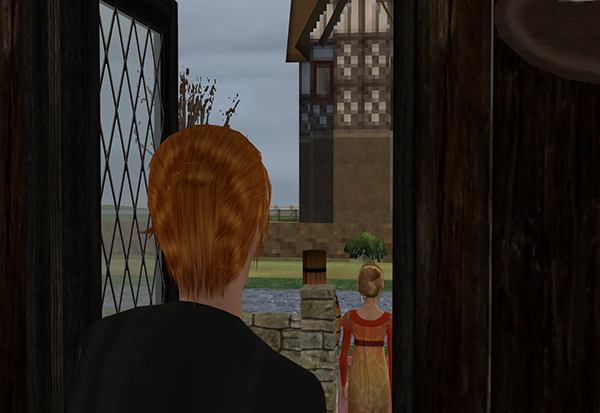 “You can’t kill yourself, Emanuel.” Kennedy murmured. “I’d miss you.” It was hardly more than a whisper. Before he could pull half his head together enough to respond, she settled her shoulders, hands falling away from him, the cloak of competence and stern-doctor pulled invisibly but perceptibly around her once more. She moved off toward the door without another word, the sound of her dress swishing impossibly loud considering how hard his heart was thumping.

He watched her pull open the door, her bright hair and bright dress impossibly vivid in the gray morning light as she stepped off the porch. He walked to the window, fingers coming to rest against the leaded glass.

2 Responses to Dunno If I Can Face