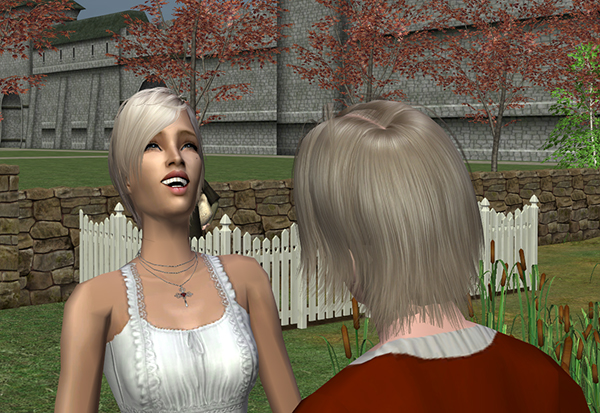 “We meet here again, Mr. Smith.” Lady Peyton laughed. Ren tried not to look blank, which just made Lady Peyton throw her head back further, the sunlight shimmering off her platinum hair, her gray eyes shining near silver, apparently he hadn’t hid it very well at all.

“Uh–aye?” Ren said when she looked at him expectantly. She shook her head. “So, what does this fine morning find you doing.”

“Being awake, apparently.” She shrugged. Ren cocked his head to the side. “Mornings, in my view at least are really only there to keep night and afternoon from bumping into each other. “But you can’t sleep around here after the sun starts rising, Dr. Misra’s day starts at Oh-my-god and woe to anyone who is not their most productive when it’s still dark out.”

“For what, you’re not the one waking me up at an hour where even the birds roll over and hit the snooze alarm and then expecting me to be happy about it.” Lady Peyton shook her head. “As for what I’m about to do, well, there’s a never ending parade of things I probably should do, help Heidi in the garden, work on those fabric samples Fox wants me to try weaving, making a new set of cups for the kitchen. But I don’t think I’m doing any of those things today. I think today I’m gonna play hooky.” 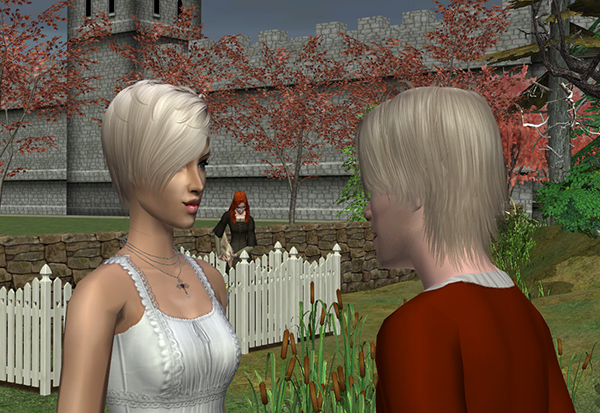 “Hooky?” She was so different, how could you love a woman who could talk for an hour and you didn’t understand a single word that she said? Or if you understood the word it wasn’t in a context you did.

“Yeah, that’s what they’d call it when you should be at school but weren’t. There’s this patch of clouds that just needs to be studied today, and I think that that is what I’m going to do.”

“Haven’t you ever done that?” Lady Peyton asked. “Just say and stared at the sky, watched for dragons and hippopotamuses and Sneezy the dwarf in the clouds?”

“Not–not since I was a very young lad.” Ren admitted. 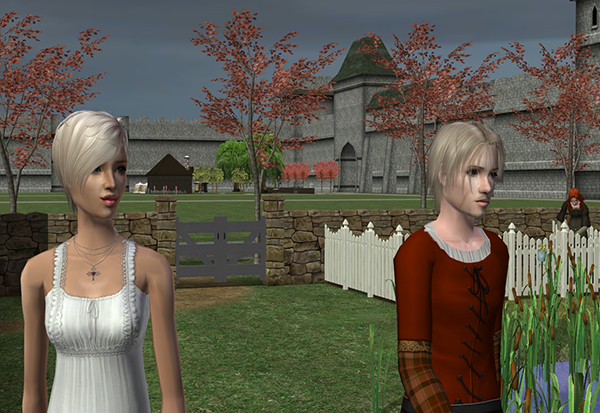 “Then it’s time you did again,” Lady Peyton said. “Play hooky with me.” She smiled and Ren felt his resolve crumbling. He had stuff to be doing. There was a long list of things that he needed to get done. But somehow, with her smiling at him like that, he just didn’t want to go do it. He followed as she lead him off to a space behind the barn, between the two sheds.

The grass was soft and just slightly cool as they sat on it. Though the clouds on the horizon could have spelled rain, or even snow, the air held nothing but the promise of spring, blossoms and new leaves, fresh grass. So different than last year when the air still held the smell of things burned. 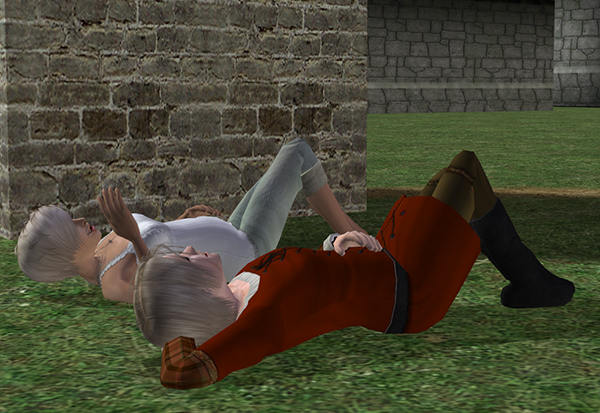 “That one,” She pointed to a cloud. “It looks like an elephant with wings.”

“No, c’mon, try!” Peyton turned gray eyes toward him. “What about that one?” She pointed to another cloud. 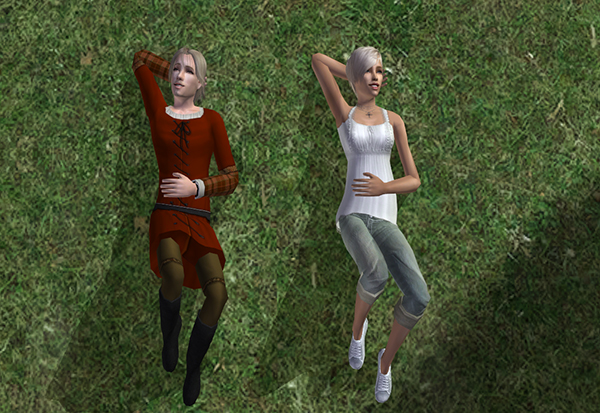 “A bat?” Ren said after a moment of attempting to decipher the shape. It looked like a cloud. But this seemed important to Peyton and so he had to try.

“Oh.” Apparently he was bad at this. Peyton looked at him before sitting up. 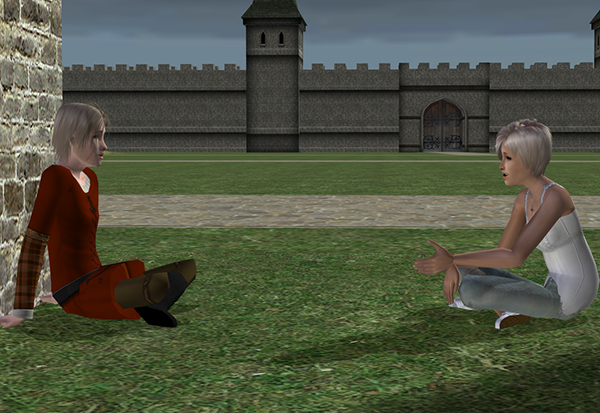 “Ren, you’re not getting this wrong. It’s–open to interpretation. So if I tell you that that one looks like Elvis in a parrot-head hat, you can tell me no, it looks like King George smoking a joint. And we both might be right.” Her hair fell into her eyes and he had the overwhelming urge to brush it back. Except–what if that was too forward?

“…Did King George do that?” He asked instead.

“You are so cute.” Peyton laughed, cocking her head to the side. 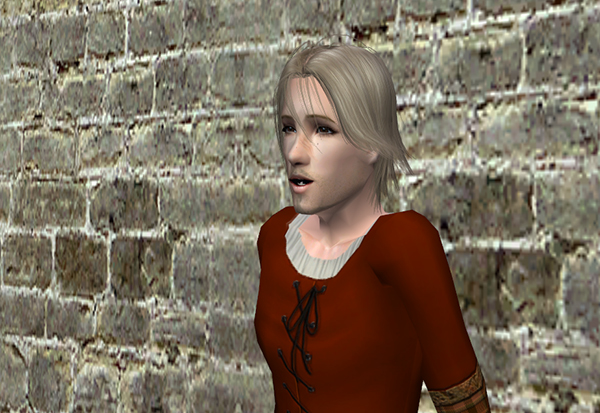 “Adorable.” He bit the inside of his lip, uncertain what to say to that. He never had the right words. They just weren’t… they never came at the right time, if they came at all. 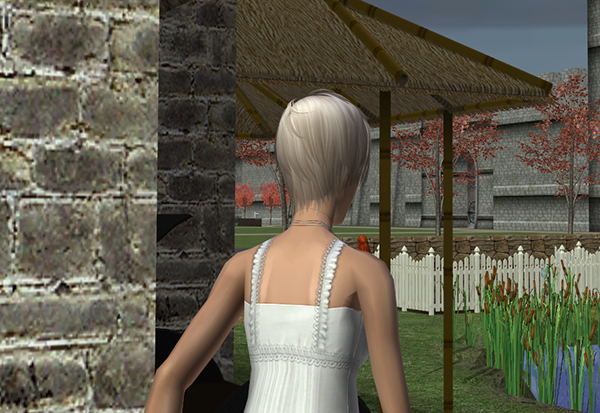 A scream rocked the idyllic morning. “Heidi!” Peyton shot to her feet with a speed Ren could only blink at for a moment. She was running before he could even get up.

“The–it was,” the boyish tenor that was stumbling for an answer, rough in a way that Ren had never heard, was still unmistakable. Sawyer. 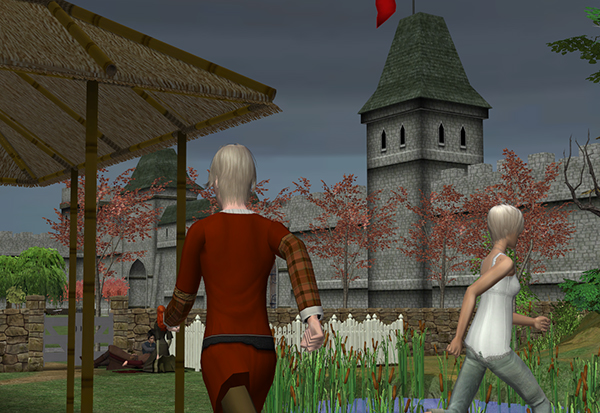 “Oh, my god!” Peyton shrieked. “Kennedy!” She pelted off toward a shed. “Kennedy!” Ren rounded the corner as she went the other way, only to pull up short and gasp.

Sawyer was gasping and sobbing, his back against the stone fence. Heidi knelt on the other side of a prone form. The coppery scent of blood caught up in the thick smell of blossoms. He was pretty sure, though, he recognized those boots.

“The animals, they just–I ain’t never seen nothing like it! We were up in the lower pasture and I dunno what happened!” Sawyer said. “And then sudden Jarrett went down. And I got to him quick as I could, but, it wasn’t…”

Some disconnected part of Ren paused for a moment in wonder. It was over half a mile from the lower pasture to here, how had Sawyer, slim, practically waif-like Sawyer, carried Jarrett over half a mile. Jarret was a big man, nearly as big as Ren and Ren wasn’t sure he could have carried Jarrett down the street, let alone halfway across town. 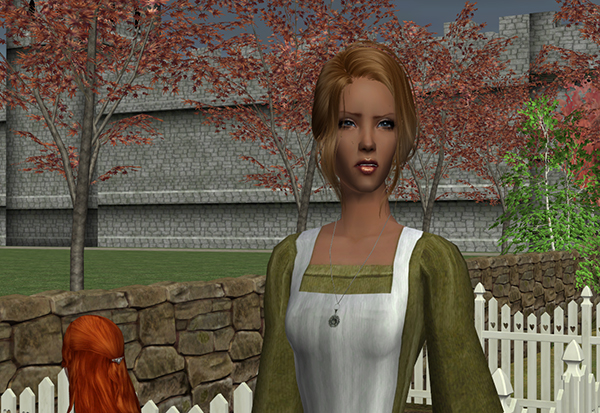 By the time it took him to get from the corner of the barn to halfway down it, Kennedy had materialized out of nowhere. She took in the scene with a quick glance then turned to Ren. “Go get the King.” Ren nodded quickly and bolted. 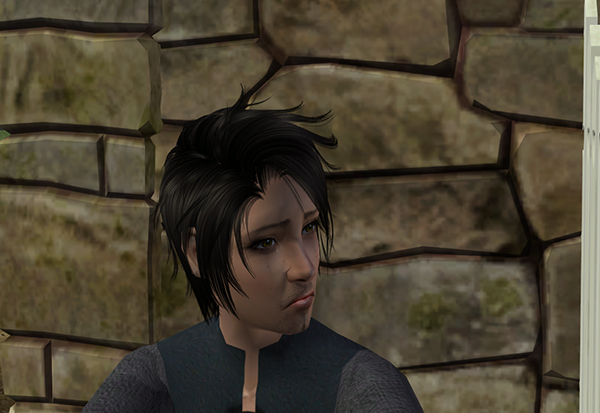 “Sawyer, it’s okay, we just need to get him into the house now.”

Ren didn’t slow, he could see Emanuel and Fox look at him as he cut through the yard at the merchant lot, see Lord Dolph and Sir Camden in their garden, but he didn’t stop, nothing stopped him until he stood facing the door of the King’s cottage. He knocked, a loud rapping sound like a woodpecker on a tree. 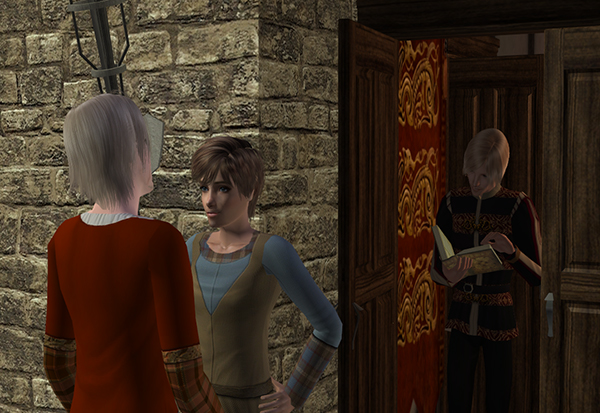 “Master Ren!” Tate, the King’s servant, looked shocked to see him there.

“Is the king available? It’s an emergency.”

“Yes, I am, what is it?” King Lachlan stepped out of the gloom in the hall and into the sunlight, a book still in hand.

“Jarrett’s hurt. Hurt bad. I don’t know what happened. Lady Kennedy just told me to get you.” He didn’t hardly look at the king, who was he to demand that the king go anywhere, even to save the life of a man. King Phillip wouldn’t have, not for a butcher, a peasant.

But Lachlan had never been King Phillip. “Tate, grab my things.” King Lachlan said sharply. The boy bobbed his head and took off quick as a squirrel. 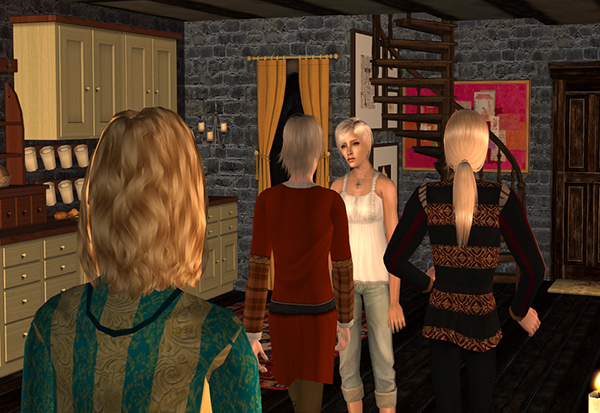 It all seemed a blur, he couldn’t remember if he walked back to the barn or the king had done something else, all he knew was that the next thing he really remembered was walking into the barn, the king to his right, Sir Wesley a few steps behind. Sawyer and Jolene sitting side by side on the sofa, not speaking and certainly not touching and Peyton pacing the floor like a caged wolf behind them.

The King and Sir Wesley both headed for the staircase after Peyton had pointed upward in response to Lachlan’s inquiry as to where Jarrett was.

“They–say no news is good news.” Peyton said, her face starting to crumble. 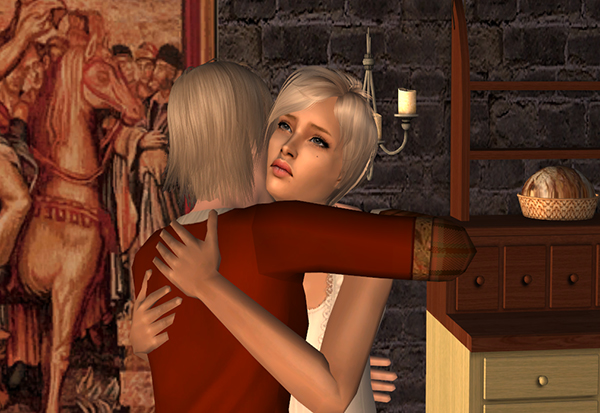 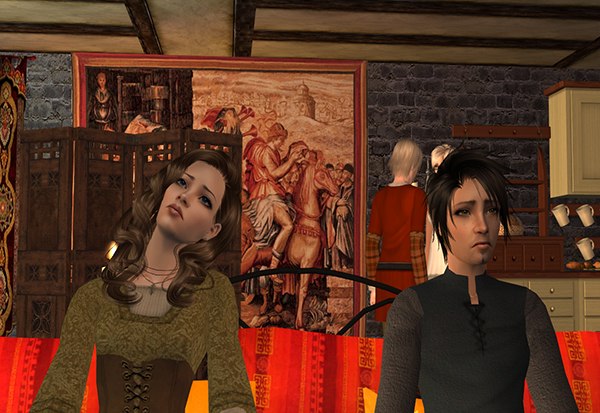 Why him? Why Jarrett? Sawyer would have cursed, would have screamed, if he could have done anything to burn through the apathy that stole his strength and his breath.He could hear Lady Jolene crack her neck, first to one side, then to the other. It seemed to be a nervous tick. He’d never noticed.

Sawyer opened his mouth to say no. “Why him?” He found himself asking instead. 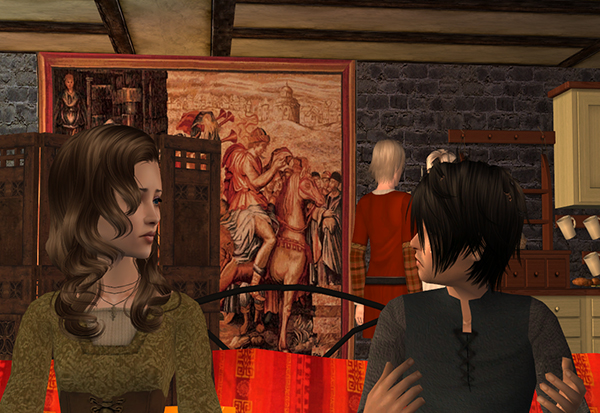 “If anyone deserved to be left alone it should be him. Unless…”

“You don’t think he–he wanted this, do you?” Sawyer asked of his hands. Everyone leaves me. Everyone always leaves me. He could never remember his parents, his mother, but everyone he could remember, they were always taken from him. Usually violently and in great pain. Was it me? Did I? Oh, please, Gods, don’t tell me I did this.

“He wants to be with his family, my lady.” Sawyer whispered. 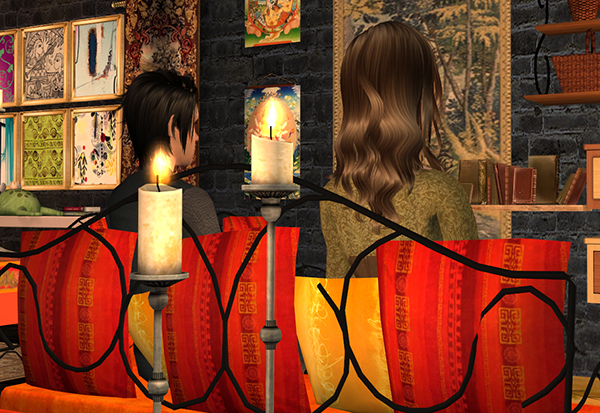 “He wouldn’t want to leave you, not like this. Not when you’d blame yourself.” Lady Jolene said, her hand touching his just briefly. The day drug on and on and still they heard nothing. Sawyer couldn’t take it anymore. It was like there was no air in there. 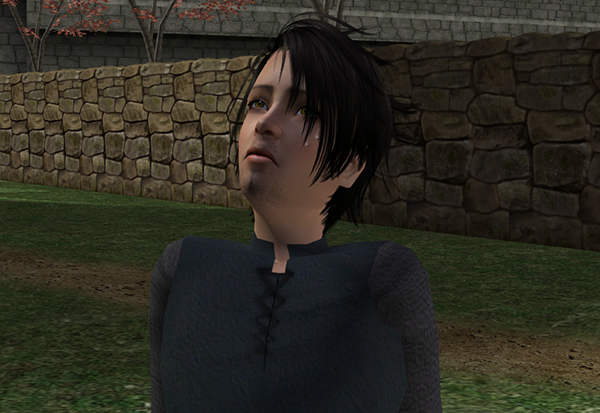 Maybe some part of him, as he settled on the grass outside, realized that he was crying, but he couldn’t bring himself to care. A soft swish of fabric alerted him that someone was standing outside, but he kept his eyes fixed on the sky, on this cloud that sort of looked like a sheep–sort of looked like Jarrett. 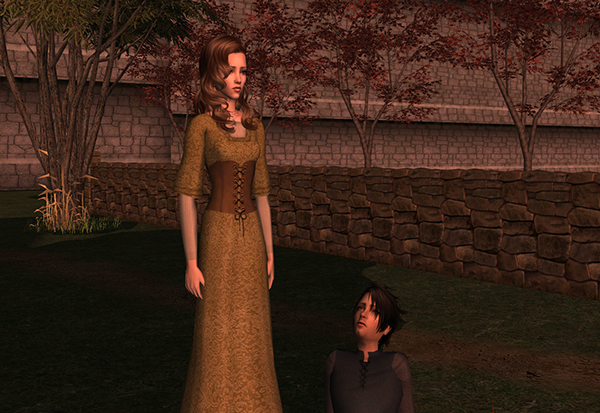 “I wish I knew what to say.” Lady Jolene spoke softly, her hem almost brushing his arm. 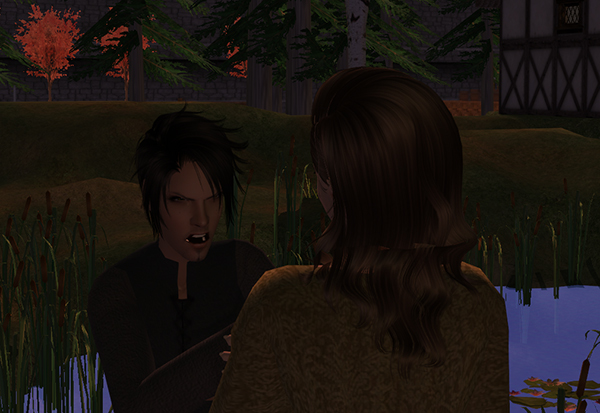 “Why don’t you just say what everyone is thinking? That this is my fault.” He was on his feet, yelling, even as a part of him recoiled from the idea of ever yelling at her.

“How the fuck do you get that?” Lady Jolene said. “Sawyer, if anything you helped, if he lives, you saved him. If, heaven forbid, he doesn’t, you tried.” 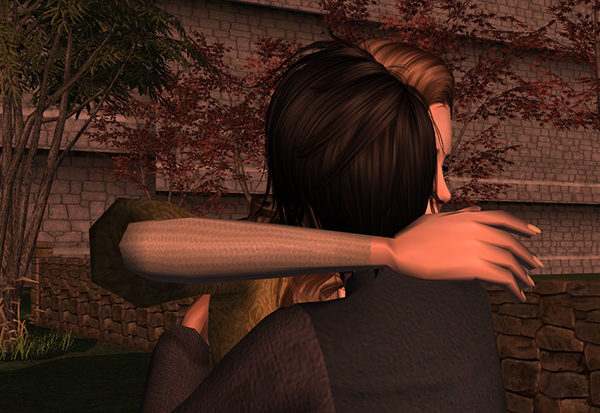 “Because people around me just die.” He said but before he could unclench his teeth to say more, a pair of arms were wrapped around him, he found himself drawn in, wrapped in the soft smell of Lady Jolene’s hair.

“Sawyer. Life’s a pretty fragile thing. Have you ever thought maybe it’s less you kill all the people around you and more the life you’ve lead is unstable?” She whispered, her breath stirring his hair, sliding down his neck.

“Then why did this happen?”Though it pained him to pull away, he couldn’t–it was hard enough arguing with her, he couldn’t do it when she was standing so close to him. 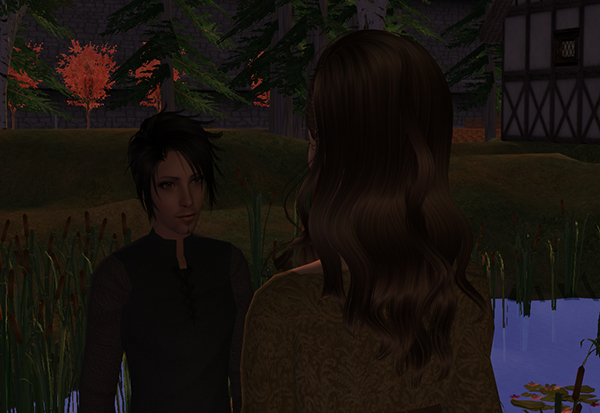 “Why does anything bad happen?” She countered.

“Okay, it was a moment of catastrophic failure destined to occur for millions of years.” Lady Jolene said. Sawyer stared, and she reached out brushing a tear off his cheek. “You asked for a reason. Not one that made sense, cause there isn’t ever a reason that makes sense when bad things happen.” 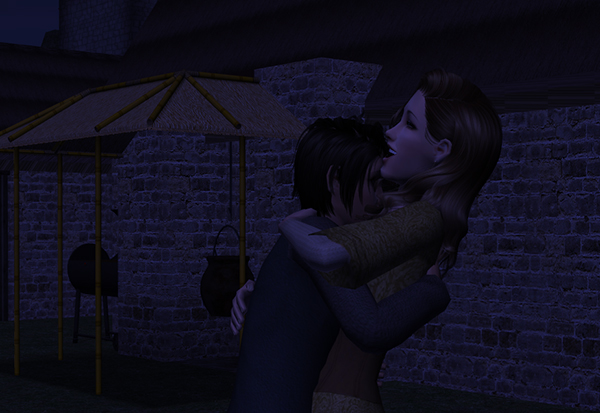 “Never?” Sawyer stared at his feet. Jolene looked at him, her eyes so dark in the twilight, and then he found himself being pulled into her again, caught in her grasp like a leaf in a whirlwind. Her lips brushed soft and quick across his. Before he could even make sense of what had just happened, she buried her face in his neck.

“There’s not much of a reason good things happen either, you know?”

6 Responses to A Lifetime