When You Say Nothing 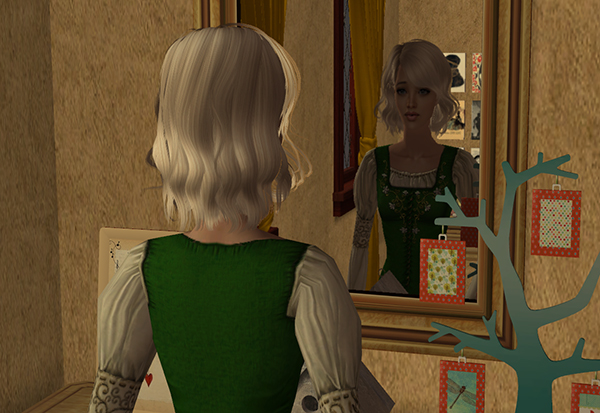 “Ugh, I’m beginning to feel like I should just have Kennedy graft this dress onto my body.” Peyton said, glancing to up meet Ren’s eyes in the mirror over the dresser. “It seems like I’m wearing it all the time anyway.”

“But what will you do if it goes out of fashion?” Ren asked curiously. Peyton snorted and tossed a platinum curl out of her face. It would probably only be another few days before she handed him the scissors and told him to trim the ends off it. He couldn’t help but wonder though, what she’d look like if she ever grew her hair out completely. Not that he didn’t like it short, Peyton could shave herself bald and he would still think she was beautiful, but he still, sometimes, wondered. 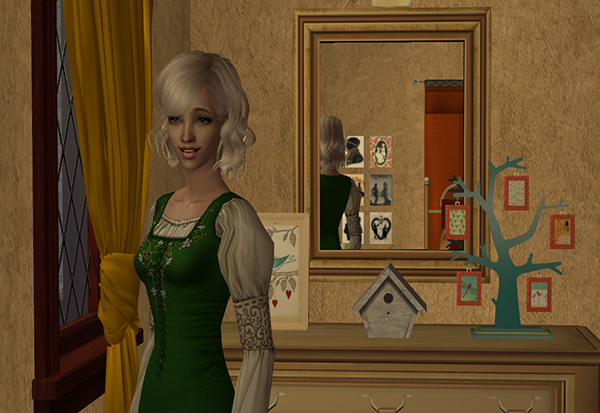 “Since when do I follow fashion?” She turned and looked at him with a raised eyebrow. Okay so she had him there.

“You don’t, but–well what about when it wears out, it’s only cloth after-all.” She sighed and rolled her eyes.

“I suppose you have me there.” She echoed his thought from only a moment before in that odd way she had. He remembered his mother telling his sisters that good wives could do that, but given what his mother had also said, somehow he doubted that Peyton’s ability to do it had anything to do with being a good wife the way Martine had thought of the title. “How many festival days does one season have to have?” She turned away from the mirror and slid onto the bed next to him, smoothing the coverlet with an absent hand. 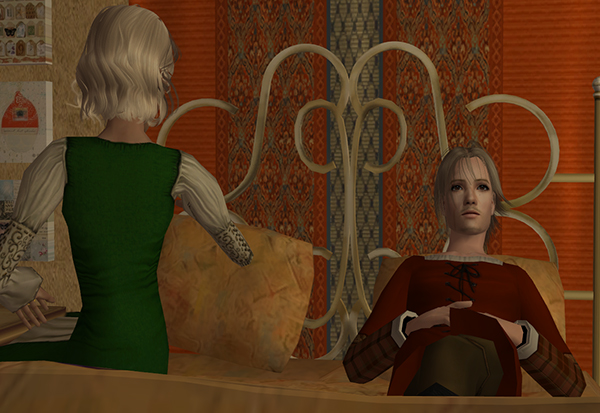 “There’s really only one more.” Ren said. “Then we get into harvest season and all there’ll be time for is harvesting or finishing up the last of projects before winter sets in.”

“Yeah. Vikki said that at least from what she and Camden have talked about, the borders maybe reopened before the harvest faire, I guess it won’t be like last year.”

“Oh?” Ren asked. Did Lord Camden really tell Lady Victoria about what happened in counsel sessions? Was the king really expecting that they would get a lot of visitors for the faire this year. By the time Harvest Faire came, there wouldn’t be a lot of time for merchants to return home, most who had come before the plague had come with the intention of wintering over.

Would anyone want to winter over in a country that had so recently been closed to a plague. It seemed odd to be thinking of winter, he glanced at the window, at the sunny summer sky visible over the town wall that backed the property, on a summer day, but it wasn’t that far off either. Peyton’s lips pursed as if she were trying to decide between sighing at him for stuffing so many questions into one word or smiling because he did stuff so many questions into one word. 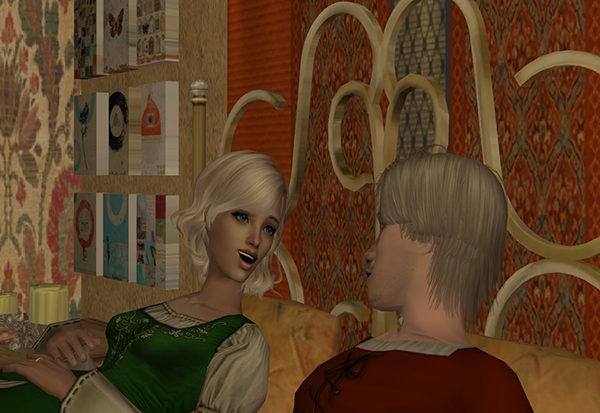 “I more meant that it just doesn’t sound like we’re all gonna have the big feast that we did last year.” Peyton clarified, her fingers flicking at an invisible piece of lint on her dress. “Vikki doesn’t give me a lot of details, I have a feeling that’s part because most of what she tells me is pillow talk.” Ren couldn’t help twisting to stare at his wife for a minute.

“Oh, don’t look at me that way.” She laughed, that deep throated chuckle that made Ren’s knees turn to water. “People with brains have to talk about something in bed other than just sex–and,” The sentence trailed off. 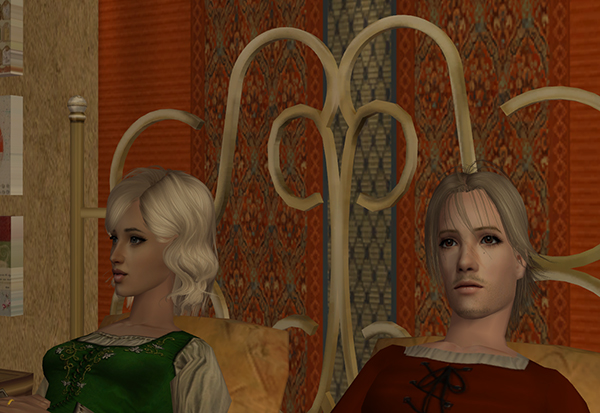 “Babies, you know, like Raquel’s going to spawn–soon–like Heidi’s gonna have, like Vikki’s going to have?” Peyton tucked her hair behind her ear and looked at her hands.

“Lady Victoria is–” it was Ren’s turn to trail off, the tips of his ears burning. Maybe some people talked about the occupants or future occupants of noblewomen’s tummies, but not any of his mother’s children.

Peyton glanced at his ears and grinned. “Yep, she told me right after she came back from Kennedy. It’s a girl thing.” Peyton shrugged, her grin fading as she plucked at the bodice on her dress. 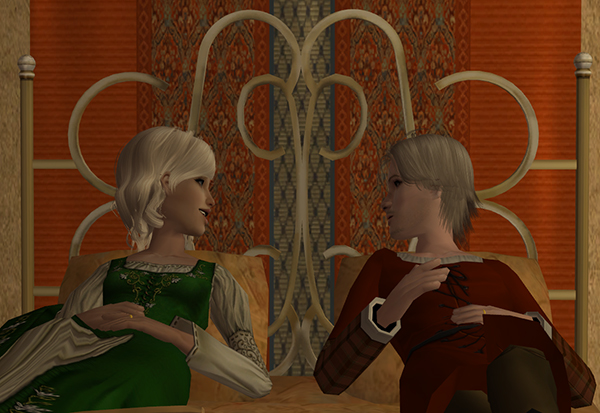 “We hadn’t really talked about–children.” Ren found himself hesitating over the word.

“I know, that’s the problem.” Peyton admitted. “We haven’t talked about kids.” She gnawed on her lip before exhaling a sigh.  “At all.” 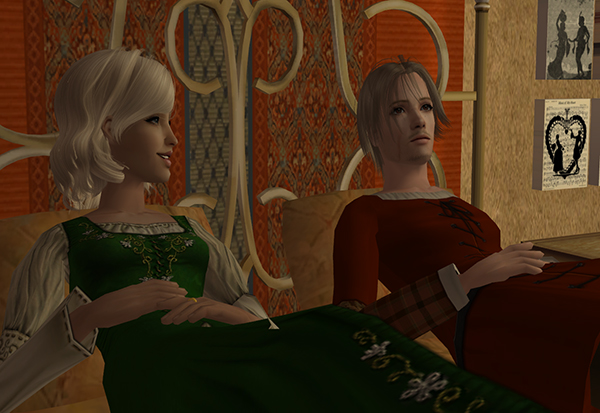 “Uh.” Well that was intelligible. He hadn’t brought up children because he didn’t want to seem like he was putting pressure on her. The same reason he didn’t harp on her wardrobe, even though Fox seemed to think that he should. (Well, in part, the way her trews showed of her long, athletic legs certainly didn’t hurt Ren’s–er–views on the subject.) He wanted her to be happy here in Shadowcrest. If she was happy in trews then she should wear them. If she wanted to talk about children, he would have thought that she would have.

Was this something he was supposed to have brought up? He knew that Lady Kennedy had insisted that Blake and Raquel wait, but that mostly seemed to be because of Raquel’s age. Lady Heidi and Lady Victoria hadn’t waited, but…

“Do you want–kids?” Peyton asked tentatively. “I mean I know we’ll need them eventually, but–” She sighed. 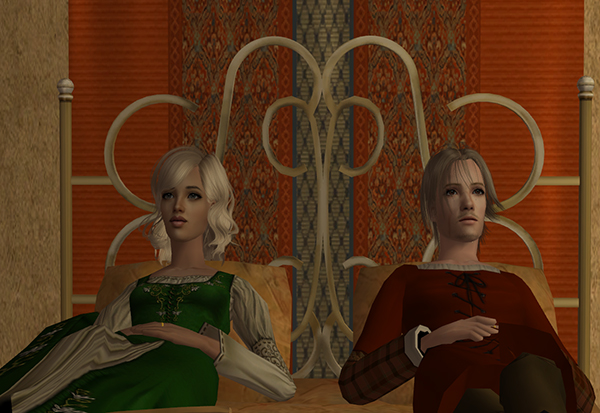 “I…” Did he want kids. Not did he think they should have them, but did he want them, as in right now? “Do you want them?” He asked. She turned and looked at him for a long moment, something sad lurking behind her gray eyes. He’d put every royal in the cash box on it having something to do with Peyton’s mother.

Martine had raised her children not to speak ill of people, but Ren once again was completely grateful that he would never meet his mother-in-law. She had to have no idea of how amazing her daughter was. He felt a deep smoldering anger once more that she had been so dismissive and restrictive to Peyton that even simple conversations like this hurt Peyton.

“I–Well, we’d talked about opening a shop, for my pottery. Right now it’s kind of stuck in with your metalwork, which I mean I guess is as good a place as any. It isn’t quite like my fabric samples hanging in Fox’s workshop though.” Peyton said. Ren nodded. “And if the borders are going to be reopened, there might be more interest in it–if it weren’t sitting in between the horseshoes and the penny nails.”

“I–I don’t know that I want to deal with trying to get a new shop off the ground and swollen feet and general waddles, Ren.” She turned and looked at him, hurt and shame in her eyes.

“That makes sense to me.” Ren said. Her gaze returned to him from where it had retreated to off the footboard. 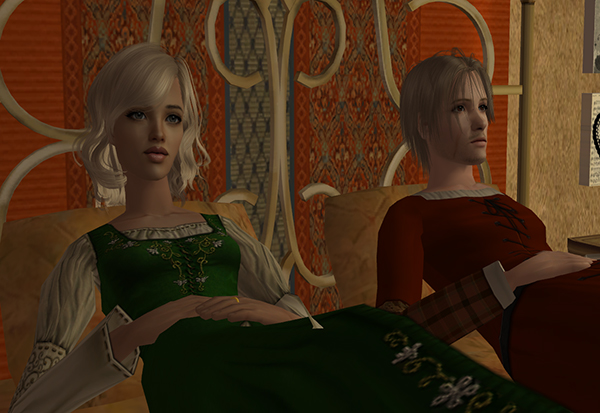 “It–it does?” Peyton asked. Her voice seemed near to cracking. “But–don’t you want children?” 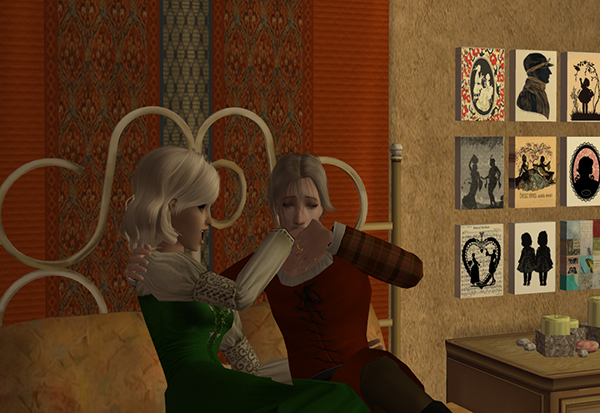 “Of course I do eventually but I think that right now it’s as much your choice as mine.” He said taking her hand kissing it. “If not more so. Maybe I would think differently if I were going to be the one carrying the child, but I’m not. And if you want to wait, then we can wait. Until you’re ready.” Ren said.

“Or until the gods have other ideas.” Peyton laughed ruefully. Ren looked at her curiously. “There’s an old saying back home, if you want to hear the Lord, meaning God, laugh, just tell him what you have planned. The only way we’ll completely one hundred percent for certain not have kids is to one hundred percent for certain stop–any bedroom activities that lead to kids.” Ren’s ears burned. “We should go, shouldn’t we?” Peyton asked.

“Fox is expecting us.”

“If he’s not busy trying to convince Phoebe that she should join us.” Peyton smirked.

“Do you know why Lady Phoebe doesn’t like him?” Ren asked, swinging his legs down off the bed. 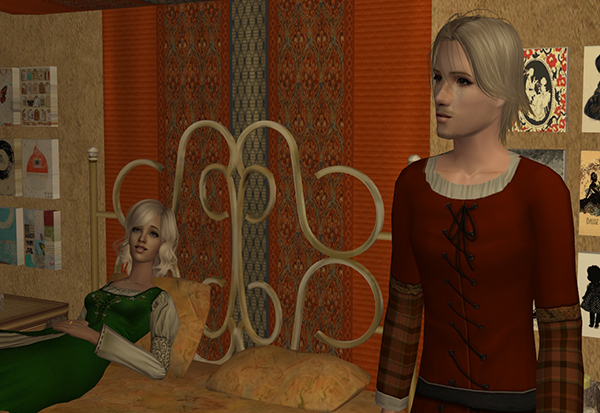 “I don’t think it has anything to do with like, I think it has more to do with trust, she doesn’t trust him.” Peyton said after a moment. Huh? He turned and looked at his wife, who was looking thoughtfully at the ceiling. “Fox is smooth as silk and charming as a fairy tale prince. But that doesn’t always add up to trustworthy. Sure, he’s charming, but is he sincere?”

“Well…” Admittedly not always, Ren thought. He’d known Fox before the plague and he had always treated every woman who walked into his master’s shop as if she were the most beautiful woman on the planet. It helped him sell more dresses, and unlike some of the other salesmen who would adopt the same thing, he never turned to one of his fellows after she left and commented that the woman in question was a dog–or any other insult. But he couldn’t have meant all of that flattery to all of those women.

“I’ve known chicks like Phoebe before. She strikes me as the type who has been burned before.” Peyton shrugged. “Probably by a guy who talked very pretty but meant about every third word. If you wanted to pass along a bit of advice to our dear friend, the tailor, I’d start with, skip the flowers and go straight to the truth, it’ll get him further.”

“Oh.” Should he have done that? He wondered, chewing at the corner of his lip. Ren didn’t think of himself as a man who was overly flowery, most of the time he couldn’t think of ten words to say, let alone how to make them all sound pretty.

“Now me, I’ve always had the opposite problem. Guys have a very hard time being flowery or flattering with me, but I get more truth than I’d ever want.” Peyton laughed. Oh. “But I guess he’ll have time to work on his game, what with her helping him out for Joey’s wedding.” 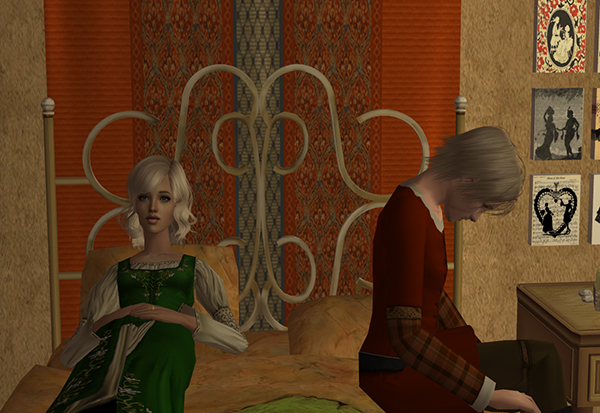 “If what I’ve heard is any indication, it’s a damned good thing that the King is footing the bills for weddings, and that ours was less than extravagant.” Peyton laughed, Ren sat back down the bed next to her in wonder. He thought their wedding had been fine. “Sawyer’d be in hock until his great-great-great-grandchildren.”

“Oooh yeah,” Peyton shook her head. “I’m half getting the idea that she’s going so overboard for the whole thing because she’s hoping someone will call the whole thing off rather than accede to her demands, after all if the king says no, then she doesn’t have to.”

Except of course if Ren knew anything about Lachlan as a person he would never say no, not on something like that. If that’s really what Lady Jolene was doing, then she was bound to be disappointed. 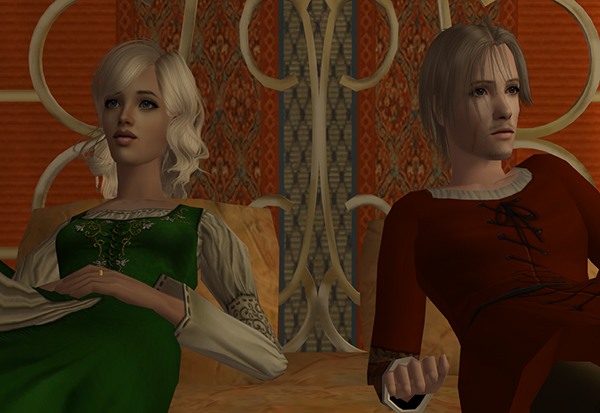 “So she doesn’t want to marry him?” Ren asked. Peyton shrugged.

“I don’t know. Joey’s not got the easiest head to climb into. I think there’s more going on there, but it’s not as if she talks to me.” Peyton shrugged again. 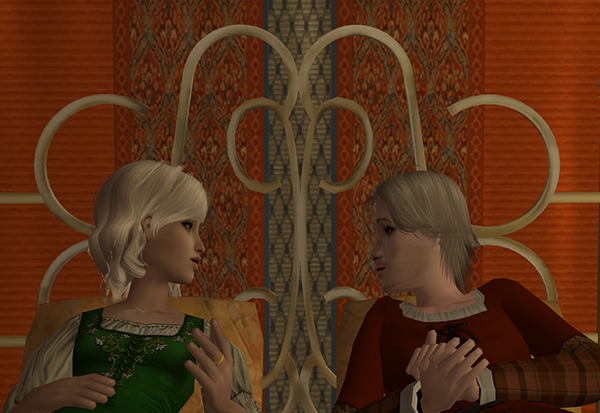 “I know,” Peyton sighed. “But I don’t really want to go. Fox is so boring when he’s talking saints.” It was Ren’s turn to shrug. “You know, it’s almost too bad that we didn’t decide we really wanted to have kids.” 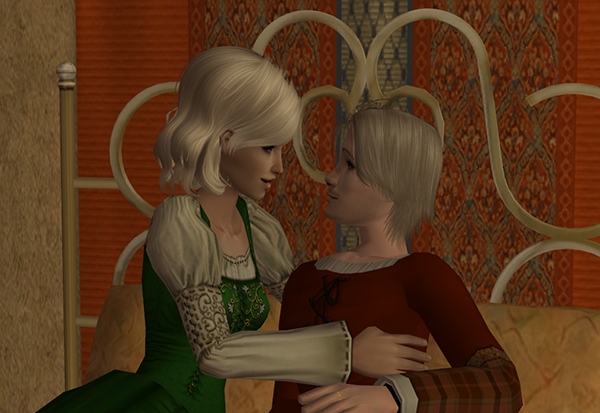 “Because I can think of a lot better ways to celebrate the feast of For Pete’s Sake, or whatever today is. Lots and lots and lots.” 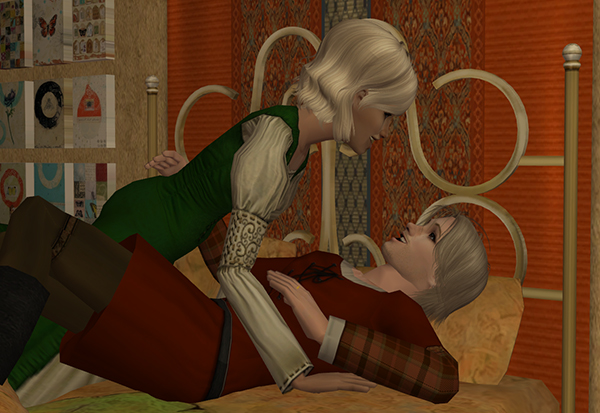 Suddenly, so could he. 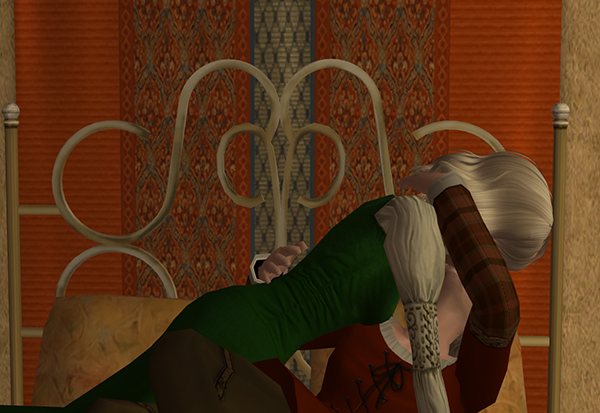 4 Responses to When You Say Nothing