I Sense There’s Something In The Wind… 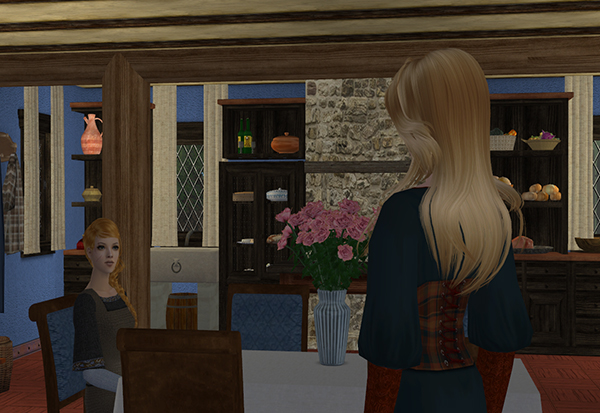 “When I said you ought to do something different with your hair, I didn’t mean loosen the braid and switch the shoulder on it.” Olivia sighed. “I meant different, like, wear it down.” Nessa smiled faintly as the other woman dropped into a chair at the table and flicked a finger at her own blonde mane.

“It gets in my way if I leave it down. Being able to see what I’m doing is more important, besides sheep don’t care about style.” Nessa reminded her. 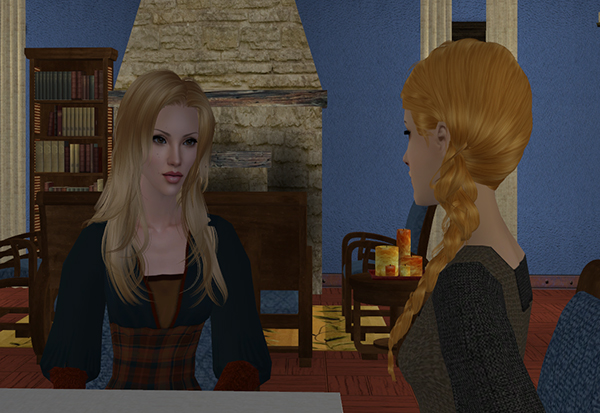 “And?” Nessa asked, her brow shooting up.

“I was more thinking the humans you see.” She batted her eyes.

“Sawyer is getting married.”

“Don’t remind me, I have to go in for my final monstrosity fitting this afternoon. I can’t imagine what he sees in that bitch.” Olivia shook her head.

“She’s making us into clones. Who sends down a dress code for a wedding.” Olivia pointed out. “And then she picked that candy floss horror.” 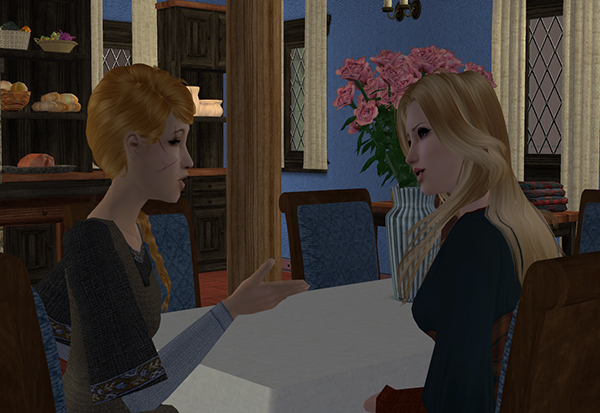 “I don’t think it’s so bad. I’ve certainly seen worse bridesmaids dresses.” Nessa said. Although in the privacy of her own head, telling them what cosmetics they were “allowed” and requiring hairstyles was rather presumptuous of her.

“She’s marrying Sawyer, not the king. In fact I highly doubt Lachlan will force us into a uniform for his wedding.” Olivia twirled a strand of strand of hair.

“Of course not.” Nessa laughed.

“Lachlan won’t force us into anything for his wedding, if it were left up to him, who knows when he’d get married. I dunno if we should be thankful that Fiona is stepping up her campaign to get him to put a ring on it or hope she falls down a well and we’re spared her vapid flirting with anything with a pulse shtick.” Olivia sighed, something that Nessa couldn’t help but echo. 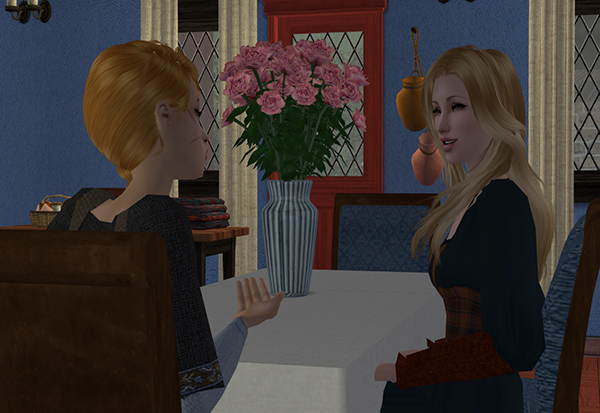 “Livvie, really, she’s not…” Nessa trailed off, unable to force out the words ‘that bad’, settling instead for “that vapid.”

“Really? I get less creeped out from being hit on by actual lesbians.” Olivia said. “Actual lesbians don’t bother me.”

“So bisexuals do?” Nessa asked curiously. 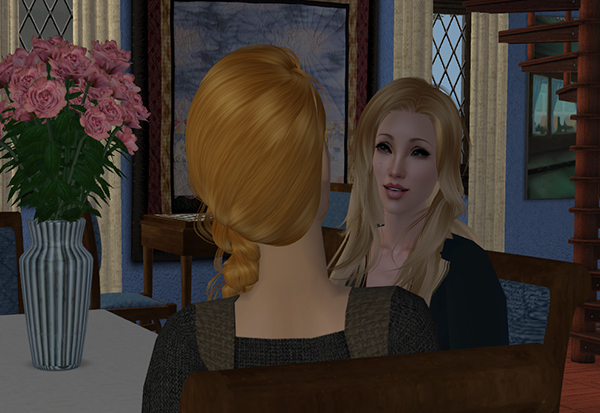 “Yep, in fact I caught him beating off to a horribly animated version of Scrappy Doo one time and there was a file on his computer labeled “Muppet Babies.” I didn’t investigate that one further.” Nessa didn’t blame her, just thinking about it made Nessa kinda sick to her stomach.

“That case is still under investigation.” Olivia said delicately.

“I wasn’t trying to creep you out, just that the kid deserves better. Especially as he doesn’t have to scrape the bottom of the barrel, he’s the king.”

“There are many ways of being a kid, Nessa.” Olivia pointed out. Well that was true enough. “And even though we both feel about a billion years old, we’re not that old either.” 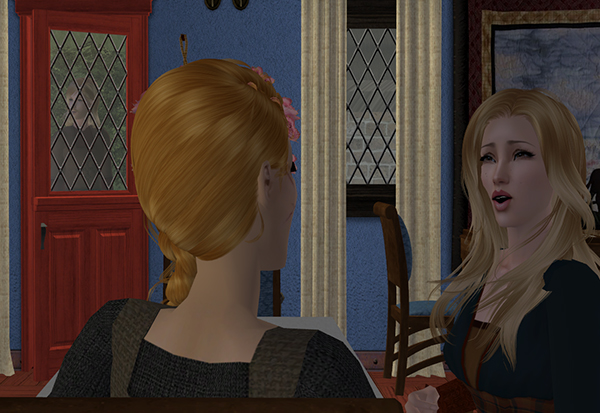 “Nor are we dead or do we need to go to the nunnery or wear the hair equivalent of a chastity belt.”

“I repeat, who am I supposed to be impressing by swanning around with shampoo commercial hair?” 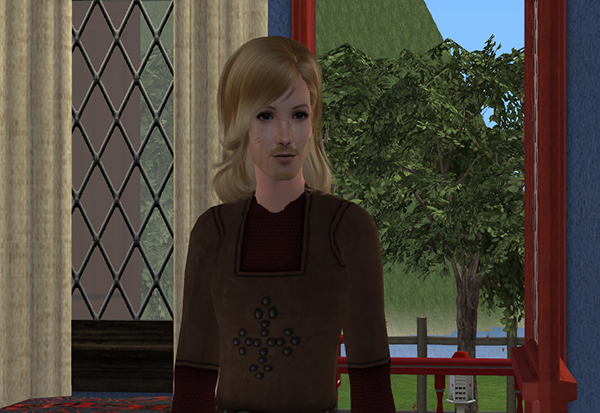 “Oh, I don’t know.” The back door opened, Jarrett smiled at both of them. Nessa felt her bottom lip catch in her teeth.

“So what are you ladies gossiping about?” 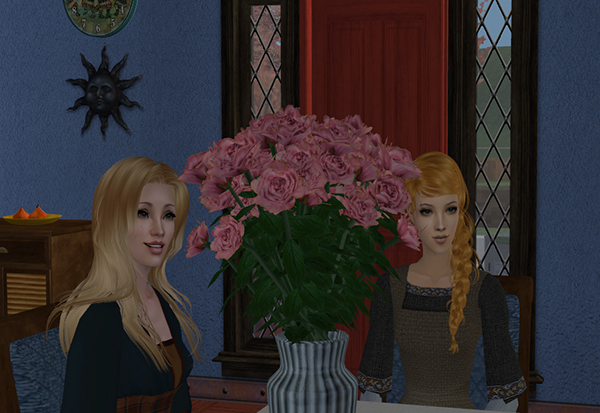 The pottery caught the light and she watched as it flicker in the summer sunlight. “Nessa, where’s the…” 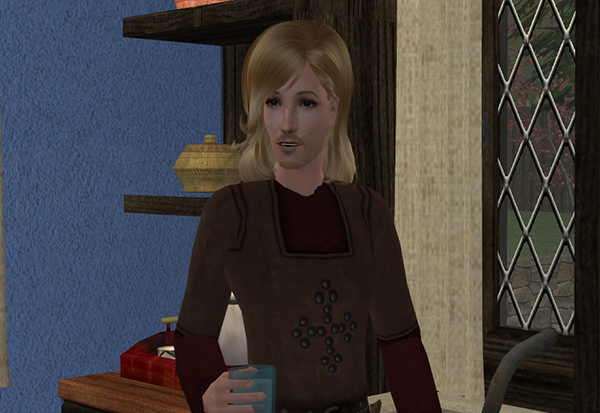 “Under the cupboard next to the sink.” She said absently. 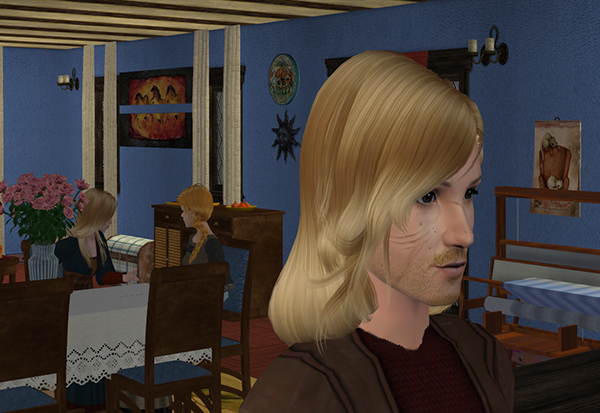 “If you’re going over to Sawyer’s you could take him that basket of bread. Sweet kid, he can’t cook though.” Olivia said, the levity in her tone said something terribly amusing had just occurred but Nessa couldn’t figure out for the life of her what it might have been.

“I want to get the carrots watered first, but I will.” Jarrett said as he moved toward the door once more.

“You two are such an old married couple.” Olivia said as soon as Jarrett’s blonde hair was no longer visible through the leaded glass. 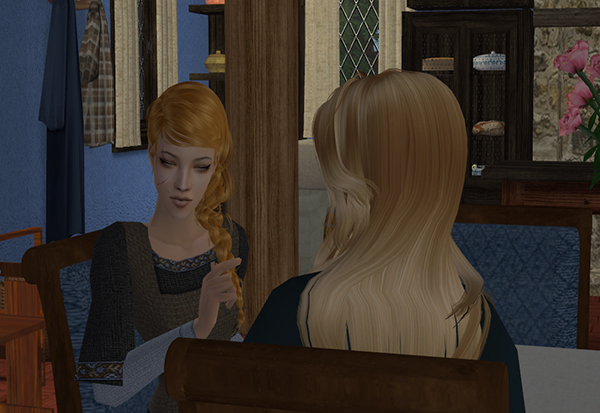 “We are not!” Nessa protested.

“Please. My nana used to do the same answering my peepaw’s questions before he finished asking them thing. They were married for like forty years before peepaw died.”

“He said he was gonna go fishing after he finished fixing the hinges on the back gate. What else would he be asking about?”

“Livvie, we are not ready to even think about relationships, either of us.” She smoothed the linen tablecloth. 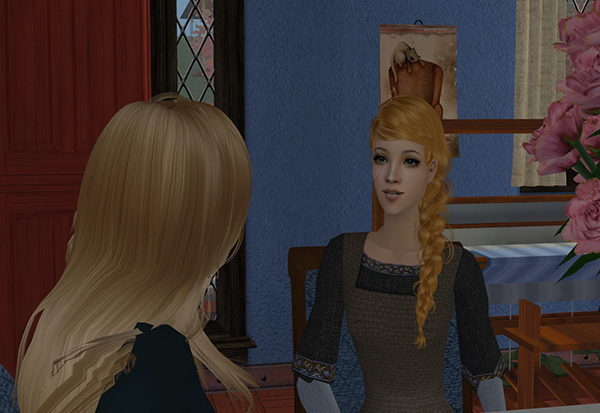 “And you’re never going to be.” Olivia said, something in her voice belying the matter of fact tone. Nessa looked at her. “I’m serious, Ness. If you two wait until you’re ready to move on, the only moving on you’ll be doing is to the next life.” There didn’t seem to be anything to say to that, so Nessa didn’t try. “But you guys deserve better. A lot better. And I can’t think of anyone in the entire bloody country who would understand you better than you understand each other. You guys get each other.”

“Right and next thing I know you’ll be trying to sell me on soul mates or something.” Nessa rolled her eyes and looked down at her work scarred hands.

“Please.” Olivia shook her head. “While I don’t think you guys are part of some cosmic plan to “be together” or any rot like that, he might not be your exact match, he might be your wildcard.”

“This isn’t getting my mending done.” Nessa shoved up from her chair.

“And I suppose I should go get my dress hemmed.” Olivia said with a shake of her head.

Sawyer was pacing. Jarrett remembered a lifetime or so ago, doing the same thing as he waited for Ivy. He remembered his father taking him aside and telling him jokes and funny stories, maybe just so he wouldn’t wear a hole in the floorboards of the chapel ante room. He also remembered thinking that when he had a son of his own, he would do the same thing were his son pacing holes in the floor.

It was something he remembered thinking in those days and hours after they’d laid little Frankie in the ground.

And it was something he remembered as he stepped into Sawyer’s path and racked his brain for something to tell the young man. 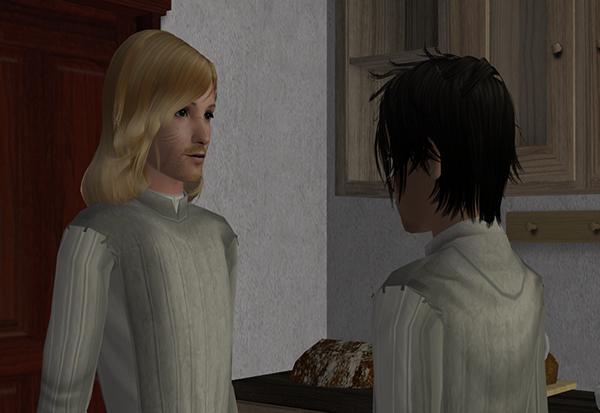 “I didn’t know it took this long.” Sawyer said mournfully. It really hadn’t been that long since the others had arrived. But it was wedding day timing. What was half a dozen minutes for the rest of them was eternities to the groom. He tugged on his stiff tunic, resisting the urge to pull at the collar, why Jolene had decided that everyone had to match he’d never know. 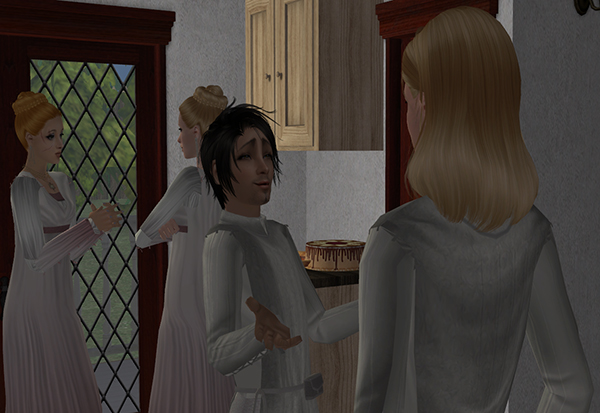 “But it’ll be over soon, right?” Sawyer said with a totally exaggerated expression his face.

“Yeah.” Jarrett nodded before catching movement out of the corner of his eye. Mistress Peyton. She peered into the dining room, obviously looking for someone, and as she could easily see Jarrett and Sawyer through the kitchen door, it couldn’t be them. She forced a smile that didn’t touch worried look in her eyes. 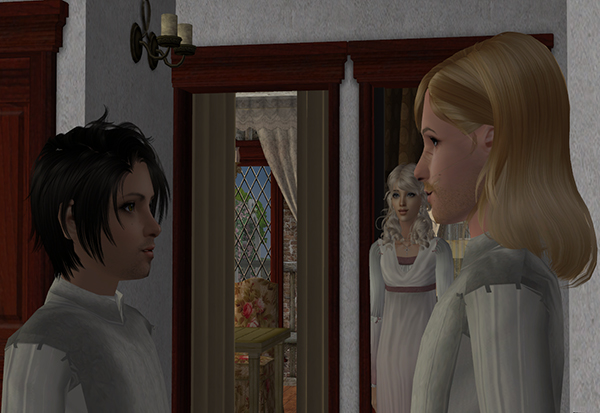 “Is something wrong?” Sawyer yelped. It was the only possible word for the sound. A yelp, like a kicked dog.

“Nothing to worry your pretty head over.” Mistress Peyton patted Sawyer on the head. But Lady Victoria’s appearance behind her in the doorway, arms crossed over her chest, eyes slightly wild, certainly didn’t do anything to put to rest Jarrett’s suspicions.

“Sawyer, why don’t you go find Tate, he’s probably fretting himself near as bad as you are.” Jarrett suggested. 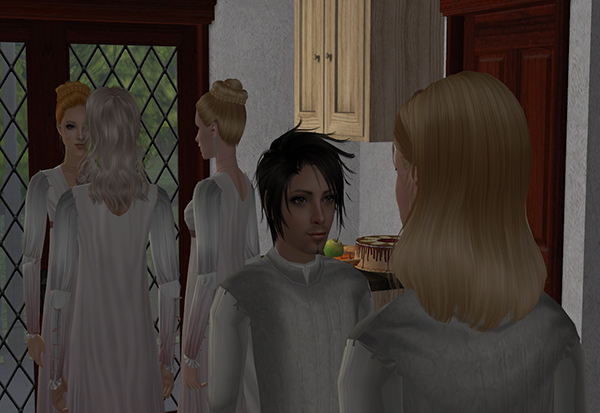 “It’s my wedding, Jarrett! If something’s wrong, why isn’t anyone telling me?”Sawyer said, as Peyton jerked her chin at the door that lead out onto a bit of totally useless as far as Jarrett could see porch off the kitchen.

“Because…” Jarrett said. Hesitating as he tried to think of a good because. Sawyer sighed. “I’ll go find Tate. White shows blood way to well.” Wondering what the younger man meant by that, Jarrett followed Peyton and Nessa out onto the porch, as Nessa’s sharp “What?!” caught his ears. 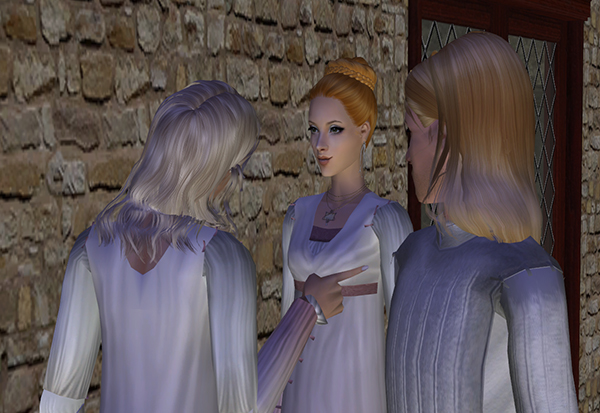 “Unlike bigfoot, we are lacking in sightings.” Peyton sighed.

“Last night. Nobody has seen or heard anything since they went to bed.” 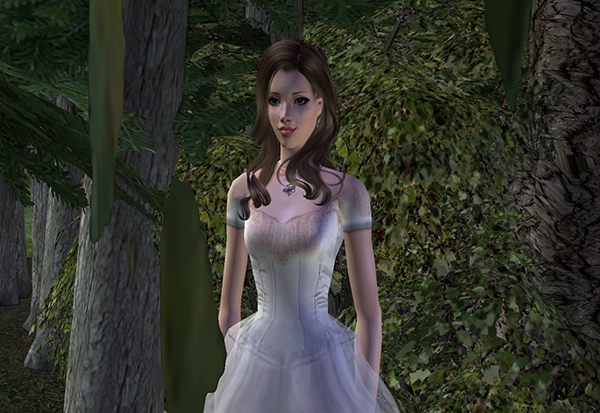 “It seems that our bride is a runaway.”

4 Responses to I Sense There’s Something In The Wind…