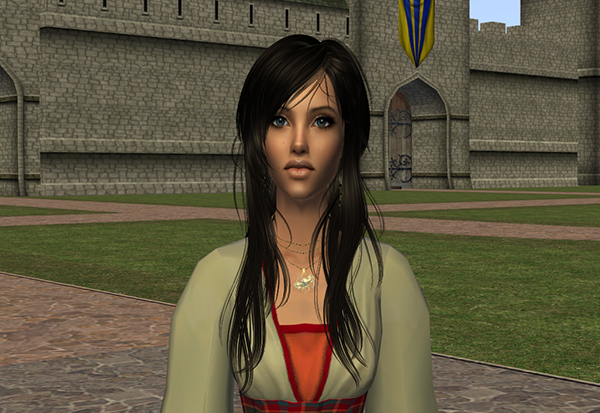 It didn’t look like anyone was here yet. While part of Tiffany was glad for that, given that meant she’d be alone with time to think, the rest of her knew why that was. And in the privacy of her own head she could admit that she wasn’t thrilled.

It really was too bad that the inn was the last project she had for the year. With winter moving in, she’d have nothing to do until spring came around and quite honestly, she wasn’t the sort of person who was happy with enforced idleness. Maybe I should take up a hobby. She thought. Learn to paint, or weave fabric, or grow plants. Or maybe she’d spend the winter months planning new public works buildings.

Something to keep her occupied. Because if she had to listen to Fiona lark on about anything much longer, she was going to kill her. And killing your king’s girlfriend was probably a bad idea. 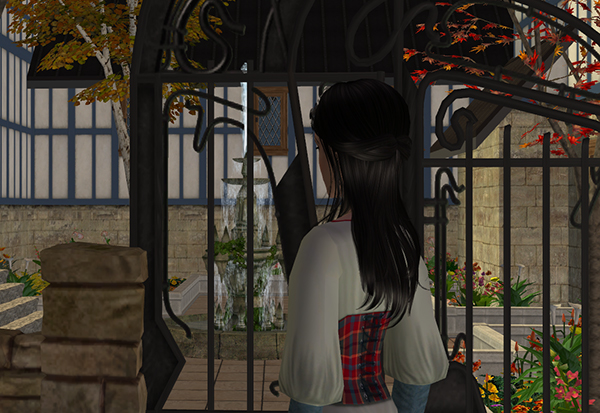 Maybe I should spend the winter getting to know Gray. She snorted to herself as she pushed the gate open and stepped into the courtyard. Emanuel had done a really good job with the flowers outside. It was kind of riotously bright, but in a welcoming way. But Emanuel circled her back around the same old problem.

Because Emanuel had proposed to Kennedy, probably in counter to her “scandalous” idea of cohabitation. While it certainly wouldn’t bother Kennedy if people talked about her living with Emanuel without putting a ring on it, it would probably bother other people. And the stress of it bothering other people might put Emanuel back on the bottle. 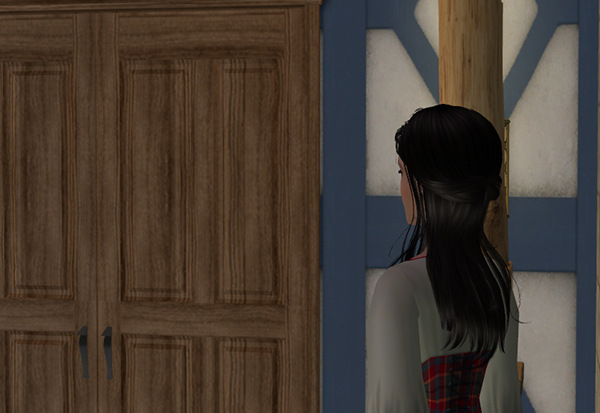 But Kennedy’d be moving into her new house just after the wedding and that was going to leave her in the barn with Jennica and the idiots. Stupid was all over young like white on rice. She could live with the fact that Zahrah and Fiona still had some growing up to do. At least she hoped that at some point they’d grow up.

She just didn’t know how well she’d do with being cooped up in a house with the two of them all winter. Which she would be. Unless she wanted to subject all of her friends to old third wheel Tiffany–one or the other of them got married. She sighed and ran her hand over the back of one of the chairs. 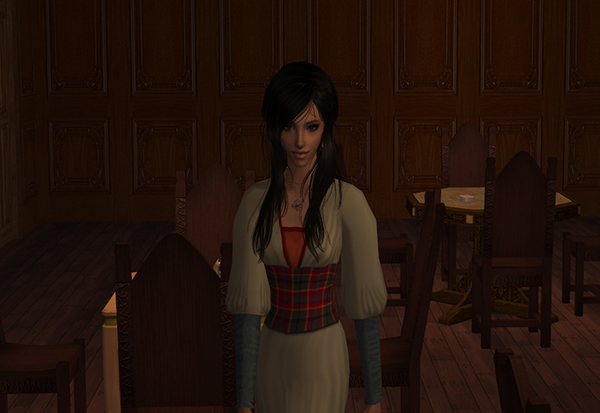 And here in the privacy of her own head, she might as well be honest with herself, that was bothering her too. Her dad had always ruffled her hair and quoted Ferris Bueller at her “Life moves pretty fast. You don’t stop and look around once in a while, you could miss it.” And she did, it was always like she’d look up and there’d be another chunk of life gone by.

The night of the prom, she’d an hour and a half late to the dance because she and her date, Sherman Wallenstein, had been building an Eiffel Tower out of celery sticks and cream cheese frosting. Homecoming, in college, even the year they’d been winning, she spent the game in the library because it was quiet, and the one party she went to she spent it building a scale model of the great pyramid out of beer cans.

She’d always got caught up in a project or an idea or whatever and suddenly there was life, gone by. She’d promised her dad–or at least his memory–when she ended up here in Shadowcrest that she wouldn’t do it again. She’d live life here and now. 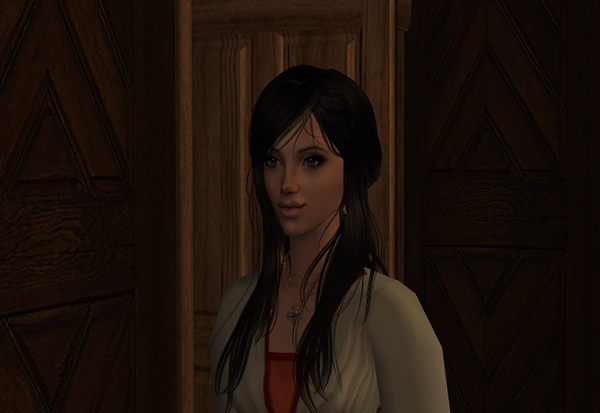 Except she hadn’t. She’d gotten caught up in building and city planning–then the castle. The castle. Hmmm, was that door hung square? She paused and tested the close on it. She’d give her left arm for a laser level. Well, actually not. She needed both arms. How about Fiona’s left arm?

All Fiona did with them was gesture wildly, do her nails and wrap them around Lock like a Kudzu vine. But that was mean. She probably did more than that–besides it wasn’t fair to inconvenience someone as much as losing a limb would just so she could get a bit more square on a door. Besides, the door seemed square enough.

Tiffany had woken up nearly eighteen months after arriving in Shadowcrest to find herself with nothing much to do, a whole season of idleness ahead of her, and everyone neatly paired off around her. Except Tate. Who was a really sweet kid–but not exactly the man of her dreams. Besides, he was sweet on Zahrah. Although who knew where that was going. And Gray, who she spent an hour a week arguing with over matters of city planning. And not in the cute When Harry Met Sally sort of arguing. 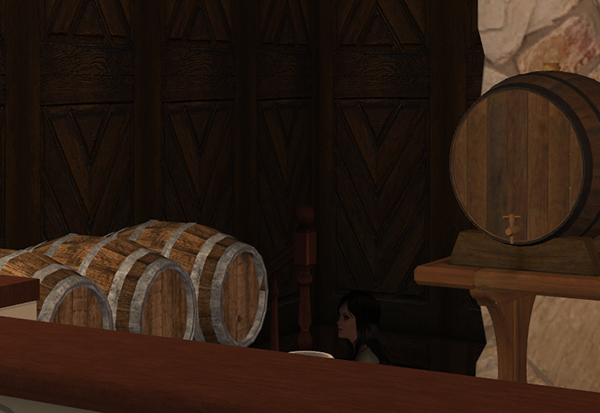 There wasn’t even any–passion in it–the sort of arguing she and Gray did was as interesting and exciting as Melba toast. And other than their weekly arguments about the way she was rebuilding Shadowcrest, they had nothing in common, no shared passions, nothing to talk about. The one person of the right gender she did have that with–was taken.

And she wasn’t equipped to take on her “rival”. Sure, maybe, in the movies it would all work out. But Tiffany knew they weren’t living in the movies. He wasn’t going to see her drab-feathers past all her tinsel and flash.

Was it sad that he really did rather remind her of Sherman? The only thing Tiffany had had that was close to a boyfriend in high school. Why, she didn’t know, they looked nothing alike, and even their personalities were different. Sherman had been brilliant, but he had no concept of people. He had no philosophy to offset his science. Math, he understood, emotion he didn’t. 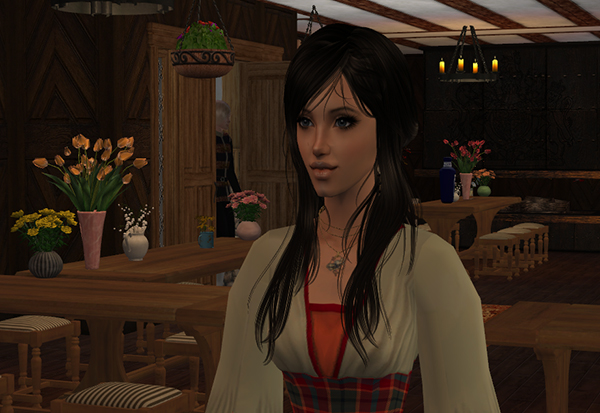 Tiffany flopped down on a stool and stared at the wine keg ahead of her. Nice of Emanuel to donate his stash of “the good stuff” to the cause of opening the pub. Kennedy said it hadn’t even been her idea. That was good though, it meant that he was really serious about getting sober, which was good. And then Kennedy would get married.

Maybe–the borders were opening–that was scheduled to happen in just a few days. That was why they’d been pushing to get the inn open now. Not that they expected too many people crossing over the border before winter set in, but it’d be better to have a place to house them.

Maybe, if Fiona and Zahrah get too annoying I’ll take one of the rooms here. She thought, tracing the wood on the bar with one finger. The door opened behind her and she turned to look at the king who grinned at her for a moment, but continued to hold the door open and her stomach fell, so she didn’t immediately climb down off the bar stool. 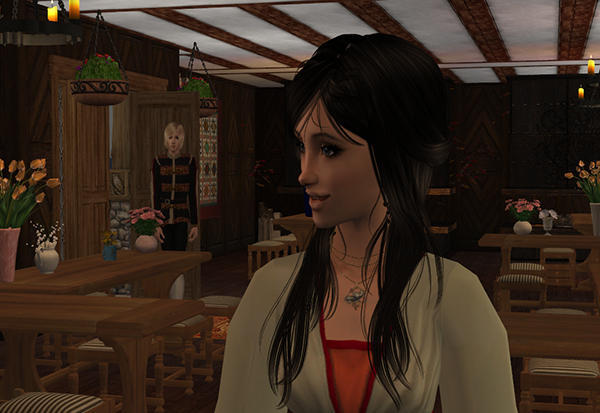 “You know you’re supposed to rise when the king comes into the room.” Fiona’s voice, complete with affected girlish lilt, came as she was trying to convince her insides that they really didn’t need to go check on the kitchen without the rest of her.

“No, really?” Tiffany heard herself say before she could stop herself. Both Wesley and Lock gave her puzzled glances while Fiona glared. Jennica offered a smile that seemed sympathetic, but who knew if it actually was, considering she and Fiona were best friends. 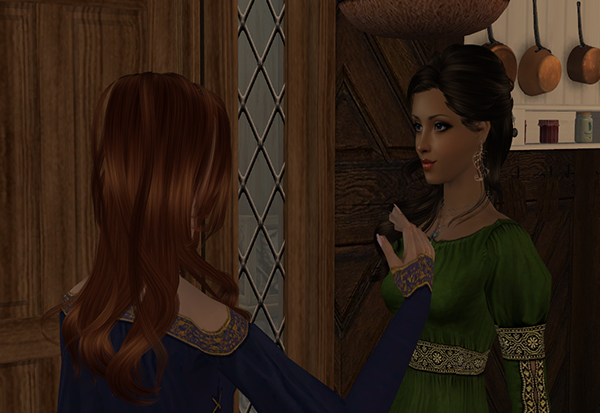 “Your majesty, Sir Wesley, Fiona, Jennica.” Tiffany said by way of greeting as she walked over to the group of new arrivals. 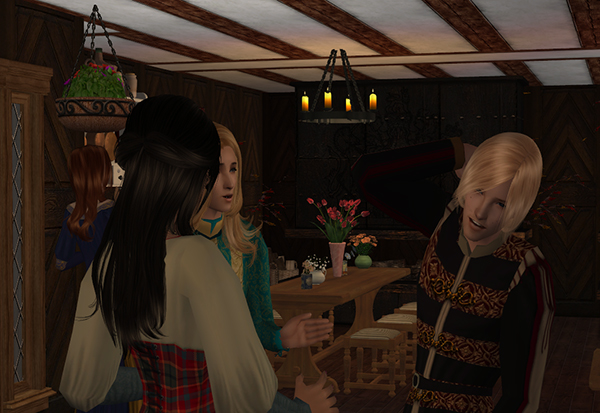 “Sorry we’re late. The ride took us a little longer than we thought it would, Lady Tiffany.” Lock said. He only ever called her that any more when Fiona was around. It probably wasn’t a coincidence.

“Meh, it’s okay. I just went and checked all the doors and windows and what not, not like I exactly need my hand held for that part, your majesty.” Tiffany said.

“So why do you need King Lachlan to come to every one of your buildings before you finish it?” Fiona asked.

“Uh, habit? I mean usually the contractor and architect would meet up with the client before signing off on the building.” Tiffany said after a moment’s thought. Now that Fiona mentioned it she didn’t know why she did it other than that–not that she really wanted to admit that to Fiona.

“And she should be here soon, too.” Tiffany said, trying valiantly not to let Fiona get her goat.

“But couldn’t you just do the walk-through with her?” Fiona pressed.

“So what’s with all the plants?” Fiona said, seemingly changing the subject.

“Well, I just thought this was a bar, not a greenhouse.” 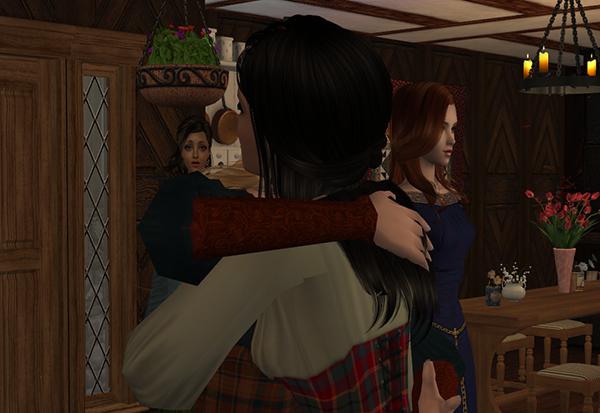 “Not every bar has to be a dance club or smoky dive. And I do like plants.” Olivia said from behind Fiona, causing the dark-haired girl to jump. “I don’t happen to think pub and plants have to be mutually exclusive.” Olivia grinned a rather feral grin at Fiona.

“The place looks amazing, Tiffany.” She gave Tiffany a hug. “It turned out better than I imagined.”

“And she imagined a lot.” Zahrah put in.

“Silence, peasant.” Olivia tossed her head regally. “I mean, please be quiet, assistant, you’re ruining my mystique. So, how bout we christen my new bar?” She chuckled, brown eyes sparkling.

“Don’t you want to make sure the building isn’t going to fall down, first?” Fiona asked.

“Nah, I trust Tiff, why? Don’t you?” Olivia asked, Fiona’s mouth worked for a minute before closing in a bitter line. 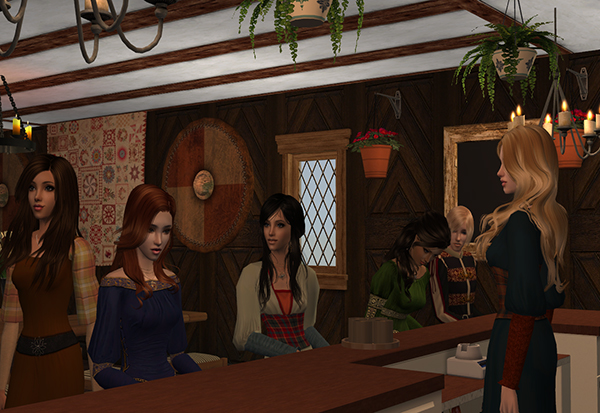 “So, do I get some wine?” Zahrah asked, hopping onto her barstool as Fiona slid into the seat next to Tiffany, leaving Lock with the end.

“I dunno, you legal?” Olivia said pouring a wine into the glasses.

“Um. Am I legal?” Zahrah looked at Wesley and Lock who exchanged puzzled glances.

“To drink.” Zahrah’s tone and expression were just so–teenager–as she said it. Like it was the stupidest question anyone had ever asked. “What is Shadowcrest’s legal drinking age?”

“I’m gonna guess by the blank looks, there isn’t one, drink up, kiddo.” Olivia slid a glass down the bar at Zahrah. Rather amazingly it skidded to a stop without slopping over, right in front of Zahrah. After they all had a glass of wine, Olivia raised her glass and intoned solemnly. “And here’s to the bar with no name.” And if Tiffany glanced to her left before adding her “Hear, hear.” and drank maybe a bit too much for a toast, no one commented.

4 Responses to So What?