Don’t Let The Sun Catch You 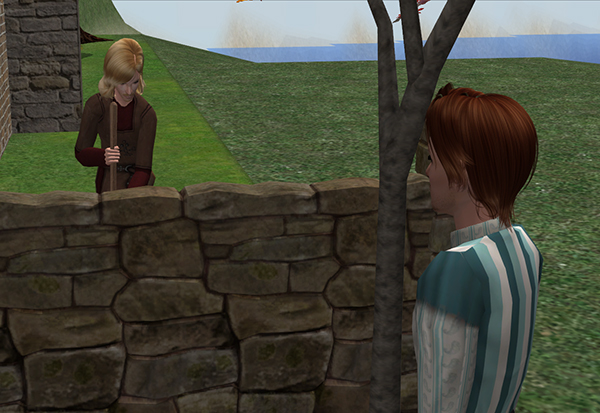 Fox paused for a moment and looked hard at Jarrett. The other man didn’t seem to notice his presence, which wasn’t like him. If he’d been doing something like tending a skittish animal or something, perhaps, but never something like just raking leaves. That and he looked exhausted, dark circles under his eyes, his mouth drawn at the corners.

Was he ill? Fox wondered, a thrill of fear snaking its way up his spine. He had no idea why Jarrett needed to talk with him, just that he’d sent Zarah past the shop. And pressing her for details was useless, she had all the staid seriousness of a kitten chasing a butterfly. And like most young things, an obsessive interest in herself only caring about others where they abutted her and her own self-interest. Surely, though, surely Lady Kennedy could cure any illness?

Jarrett wasn’t an old man for all that he seemed it sometimes. He was only three years older than Fox. Old enough that he could easily have resented having to start over. Could have resented it and no one would have blamed him for it. But that wasn’t like Jarrett, if he cursed and railed against the gods, he did so quietly with-in his own head and didn’t seem to let it stop him from doing whatever he needed to do.

Still, Fox had to admit to himself, if the plague had done nothing else, it had made them all far more aware of their own mortality. And that hung a lot heavier on Jarrett than it did on the rest of them, making him seem older than his six-and-thirty years. If he were sick… 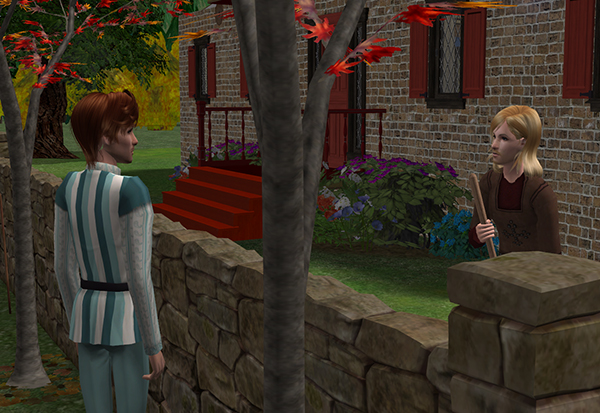 “Fox.” Jarrett said with a smile looking up from his pile of leaves, finally, though the smile did nothing for the haunted look in his eyes.

“Jarrett.” Fox smiled, hoping that his concerns weren’t clear in his eyes. Fox had been a salesman far too long to not be able to read people and Jarrett more than most wouldn’t appreciate the perceived intrusion.

“I hope I’m not taking you away from anything important.” Jarrett batted the rake at the pile of leaves by his feet, shifting maybe half a dozen of them further onto the pile but otherwise the action was unnecessary.

“Of course not. I have plenty of time for my friends and the latest batch of cloth just came out of the dye vats and needs to dry before I can do anything else with it.” Fox said.

“Yes, but what if you have a customer?”

“It’s slow right now, pretty much everyone has either placed their orders or isn’t ordering anything at the moment. Besides Phoebe is tending to the shop and she’s better than me at any rate.” Fox smiled. “I swear she could sell a watering can to a raincloud.” Jarrett chuckled. Was it a bit hollow sounding? Fox closed his eyes and sketched a cross on his palm.

Some might have interpreted the gesture as being a ward against evil. But to Fox, it wasn’t so much a ward as a hope. A hope that the gods were with him and a those he cared about.

Jarrett didn’t seem to notice or if he did, he didn’t react. He was probably used to Fox doing that. Fox had done it so long that he wasn’t even aware of it half the time, like people biting their lip or tugging their ears. 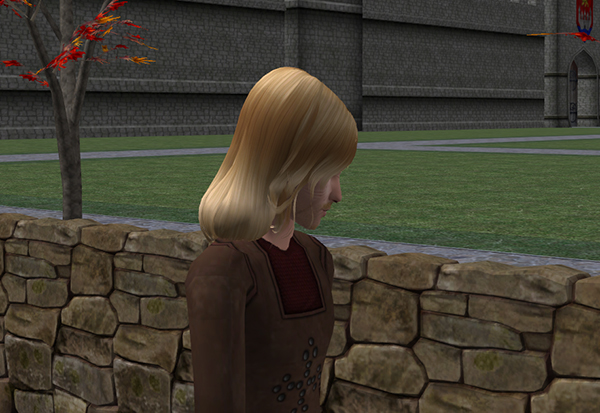 “Well, I’m not glad your business is slow. I mean you’re in the process of making over your house.” Fox flushed.

“Preacher livin’ in sin, huh?” Rather than his face and eyes lightening with amusement, Jarrett’s eyes went dark and his face drawn.

“Actually, no. She has the master bedroom, I’ve got one of the upstairs rooms.” Fox said. “She says that marriage is a big step and that we should know what we’re getting into before we take that step.”

“Jarrett, I know that you appreciate your privacy, but, I sense that all is not well. Would you like to tell me about it?” Fox asked.

“Actually, aye, I would, it was why I asked you to come by.” Jarret said, setting the rake against the fence, an action that caused Fox’s brow to arch upward, he never left his tools out. He followed Jarrett to the house, the older man hesitating at table, his hand reaching toward the chair Nessa normally sat in to talk before jerking back.

“Care for a game?” Fox gestured at the chessboard and saw, for the first time relief in Jarrett’s face. 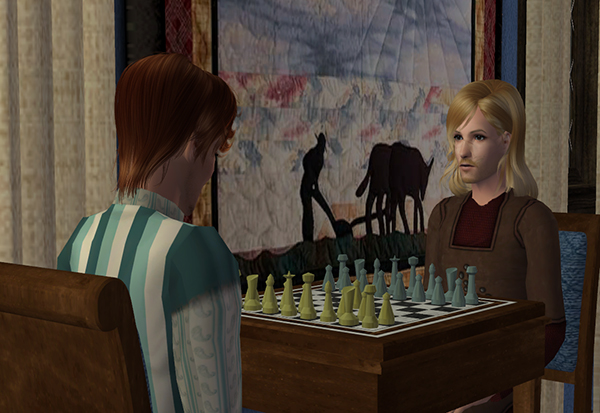 “Aye. That–sounds good.” Jarrett said. The figures were lined up with precision on squares and Fox was contemplating his first move.

“Fox, I know you’re a good man, but have you ever done–that just–changed everything, and not–not in a good way?” He asked with a sigh.

“Oh, aye. I think we all have.” Fox said. Jarrett didn’t ask him to elaborate and he didn’t offer. Jarrett wasn’t asking for an anecdote as Blake would have been, from what Fox knew of his friend, it was more a question to put him into the right frame of mind.

“I still love Ivy.” Fox nodded and took one of Jarrett’s pawns. “But, lately, I’ve been–I’ve been thinking about someone else.” 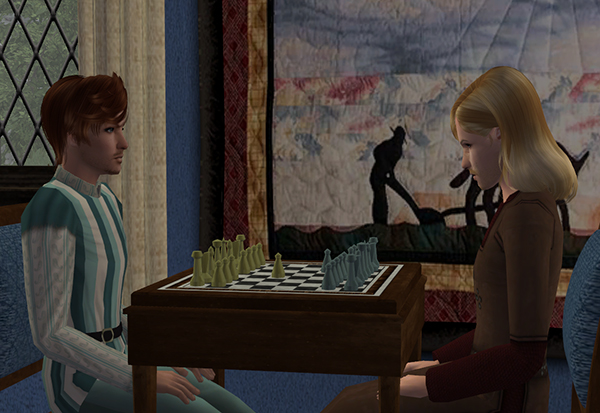 “There’s no harm in that.” Fox told him.

“In that, nah, but, then the other night, I did something–I think there might have been harm in. After we left the castle after Hope was born, Nessa and I came back here–we–talked, well, more she talked and I listened. She told me–something about her previous life–about the man who–hurt her–and about the friend who tried to save her.” Jarrett took his bishop, but opened himself up for Fox to take his rook. The thread of conversation stopped as Jarrett pondered his next move.

If there was one thing any preacher got used to was when a man was making a confession of any sort, it was a long pause. Even those men who found words the cheapest were skinflints with them when it came time to admit a wrong.

“Check.” Fox said into the silence. 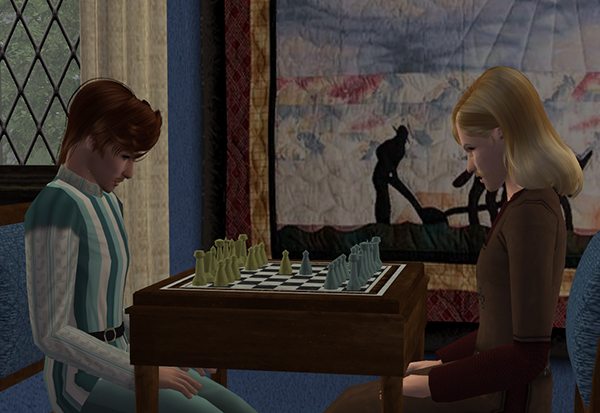 “Is that supposed to mess up my game?” Jarrett chuckled as Fox hoped but shook his head.

“Actually–I–I did more than that.” Jarrett said. “We–um–,” He colored and looked away.

“You made love?” Fox asked when it was obvious that Jarrett was not going to continue.

“You know, Jarrett, the Gods have so much to worry about–a man and a maid, even those not in the bounds of marriage–probably matters very little to the Gods. You know, in some of the northern areas, a couple often doesn’t handfast until after the lass has missed her first course. It guarantees fertility.” Fox said causing Jarrett to blush again.

“It isn’t the love-making, Fox. I mean, I’d never taken a woman other than my wife to my bed.” Jarrett said. 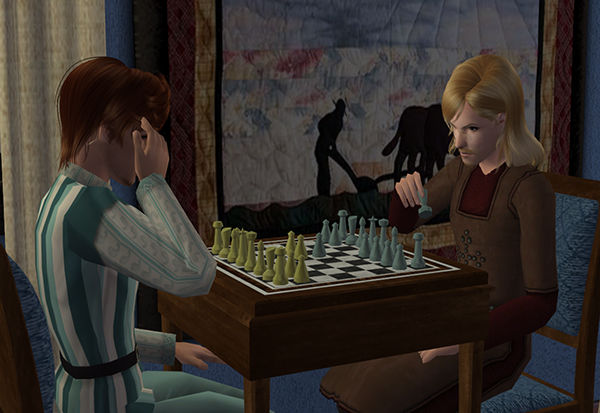 “You’re a better man than many.” Fox said.

“But it was–never like that.” Jarrett said. “I never felt that way in Ivy’s arms, Fox. And now…”

“I think I missed something.” Fox said blankly. 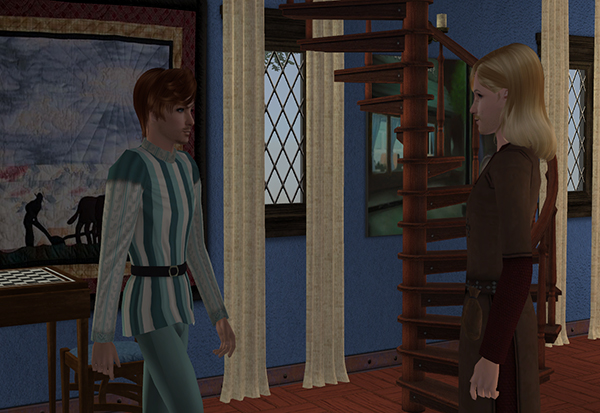 “Nessa–She didn’t understand what she was getting into.” Jarrett ticked off on his finger.

“She did, I’m sure. You’re not the only one who talks to me, Jarrett.” Fox said when the other man turned to look at him.

“I wasn’t trying to–,” Jarrett cringed.

“Jarrett, if men only did the things they were trying to do–we would have no need for forgiveness.” Fox told him, shaking his head. 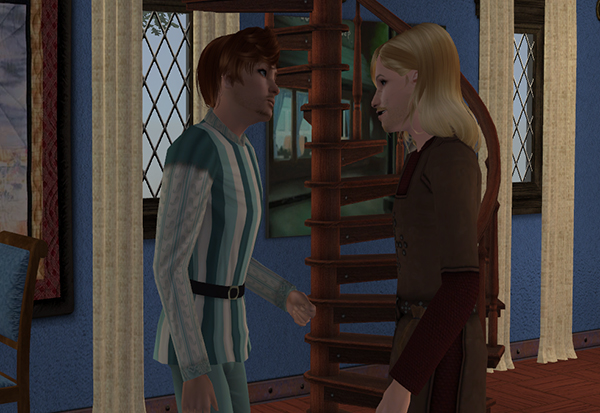 “Forgiveness? How could she ever forgive me?”

“She probably already has–if she blamed you to begin with.” Fox told him. “She has a great amount of heart.”

“Which she are you talking about?” Jarrett asked. 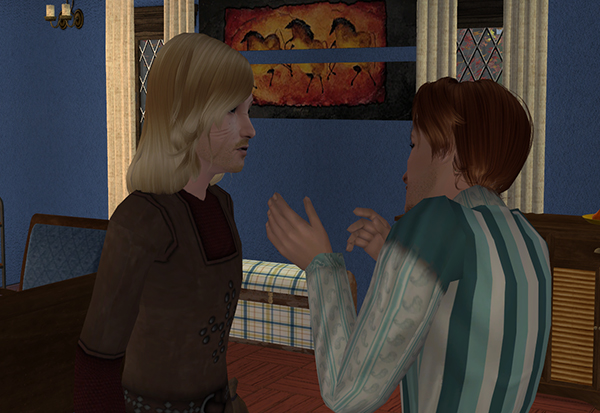 “Which one were you talking about, my answer’s the same both ways. Jarrett, Ivy loved you enough that she wanted you to go on. To feel again–to love again.” Fox said. “And Nessa, Gods above, Jarrett. Nessa! She wouldn’t have to forgive you, cause she’d never blame you and you know it!” Jarrett sighed and stared at his hands. Fox put his hands on Jarrett’s shoulders and looked at him for a long moment.

“Jarrett.” Nessa said turning to face him later that afternoon.

“It was my fault, I apologize.” Jarrett told her. 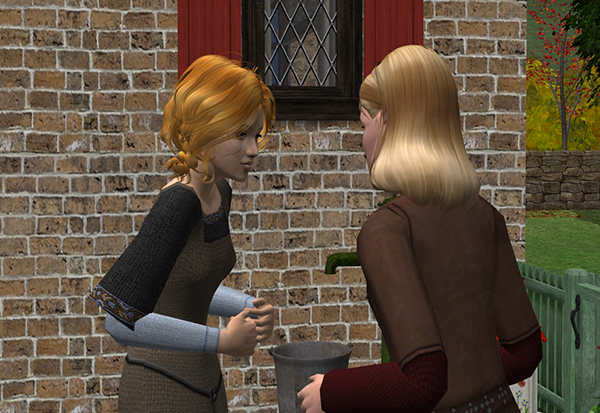 “No, really, it was mine.” Fox was right, damn him, how was he going to convince her…

“It wasn’t. I am to blame here.” Nessa started to open her mouth to refute it. 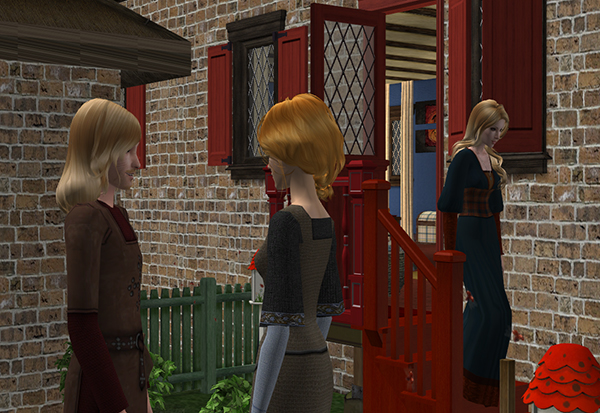 “No one is to blame here! It was good sex, damn it. You’re not supposed to walk around flogging yourself, unless you’re into that, which I’m sure neither of you are, crying “Mea Culpa!” You’re supposed to be walking around saying “you know, that was completely fucking awesome, when can we do it again?” Get your fuckin’ script straight and stop sounding like a chick flick.” Olivia said from behind them and they both whirled to face her.

“It was just sex, you know. People bone each other every day.” She crossed her arms over her chest and glared at them. “Can things please get back to normal around here? Or close enough, I mean I’ll try to ignore any and all wall thumping if it means you’re both okay.” And just what did one say to that? Jarrett wondered.

2 Responses to Don’t Let The Sun Catch You