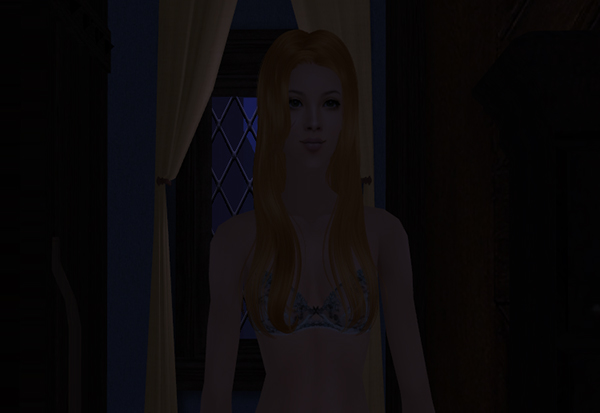 “Livvie?” Olivia wouldn’t have thought she’d have fallen asleep so quickly after the evening she had. Worrying about your best friend, then coming home to find her not in her room–going into your other roommate’s room to ask if they’d seen her only to find them both naked in his bed–not exactly a lullaby and a warm glass of milk. But apparently she had dropped off fairly quickly.

“Livvie?” Nessa’s voice broke and she was wringing her hands together. 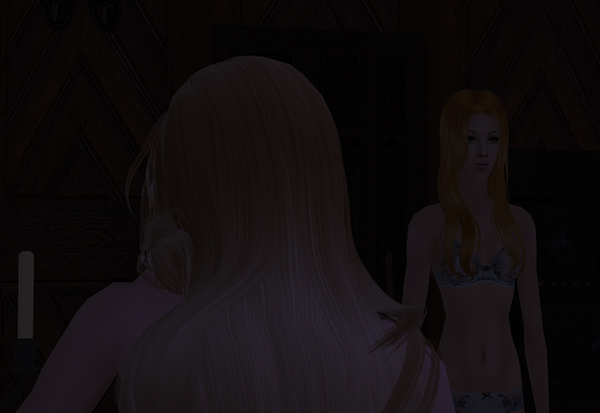 “I’m waking up, hang on, hang on.” She sat up and stretched, peering into the dark. “What’s up, sweetie?”

“If this has to do with–where you fell asleep tonight, I know.” And would really rather not revisit the whole thing. There was something, no matter how much pornography you’d watched–or suffered through because you knew the evening was going to end with a request for permission to stuff a dick up your ass–it was a whole different ball of wax to walk in on people you knew–even if it was just post coital snuggles and sleep.

“Oh.” Nessa’s voice broke, Olivia patted the bed beside her and reached for the flint and steel to light the candles on the bedside table. 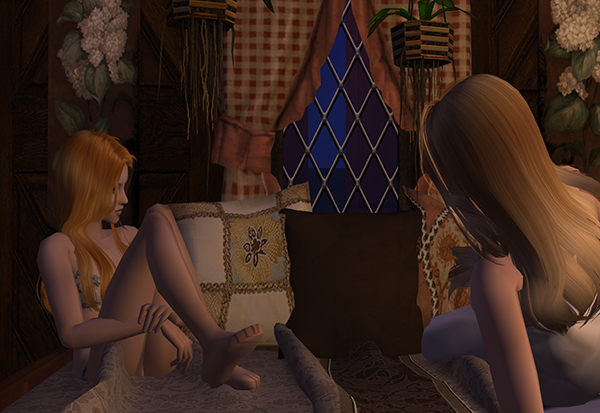 “Aww, sweetie, it’s not like I walked in on you guys gettin’ kinky or anything.” Olivia said as Nessa curled up in the far corner of the bed. Nessa flushed and played with her hair. “There ain’t nothing wrong with getting a little.” Olivia tapped Nessa’s knee with her fingers.

“I took advantage of him. He was vulnerable.” Olivia kept from dropping her head down and groaning by will and lots of it.

“Don’t pull out Jolene’s greatest hits, Ness. There’s no way in hell that you did anything to him that he didn’t want to do. You’re both adults, you’re both capable of saying no, and you both have way too much respect for each other to go ahead with the plan if the other one wasn’t on board.” Olivia told her bluntly. “Don’t make this angsty, Nessa, please. If there were a guy who hit my chimes like I know Jarrett taps yours, I would have tumbled him into bed long before now.” She rolled over onto her stomach and looked at Nessa for a long moment. 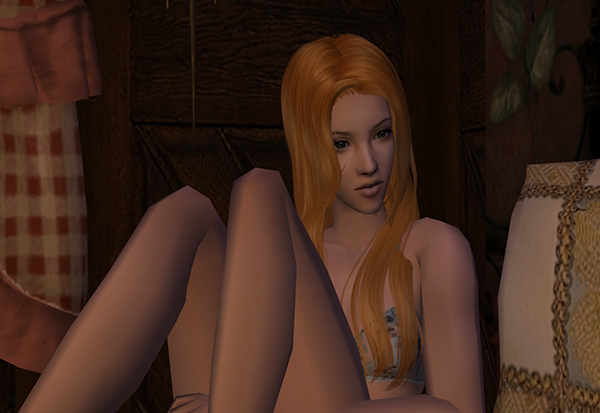 “And you think tapping him will change that?” Olivia asked bluntly.

“How will he be able to respect me?”

“Because, sweetheart, the man doesn’t know how not to respect a woman.” She told Nessa who hung her head. “He doesn’t. And he’s not the sort of man who is going to blame you for the fact that you guys bumped.”

“How many euphemisms for sex have you got?” Nessa asked with exasperation. 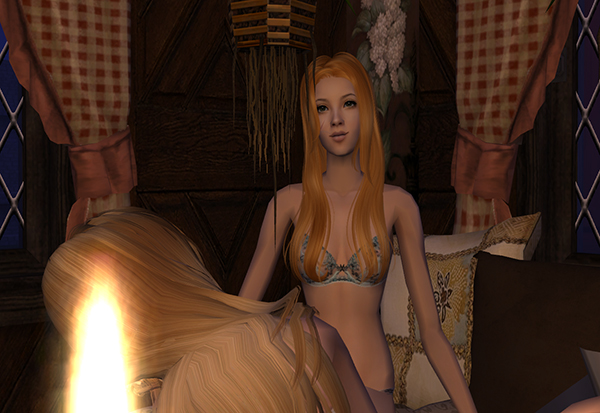 “Not a clue. I never counted.” Olivia said. “But I’m not going to let you confuse the issue. You can’t go back in time and not have fucked, so you have to go forward–and deal with the fact that you guys hooked up.”

“Maybe…” Nessa traced a scar on her leg with one finger.

“No. Seriously, no. Even if it were possible, which I’m not sold it would be–if it were why wouldn’t Lachlan have brought Kennedy back in time, then gone back with her and had her fix the plague? Would you wanna go explain to Lachlan why you wanted him to try and send you back in time again?” Olivia asked. Nessa blushed again and stared at her knees. “Well?” 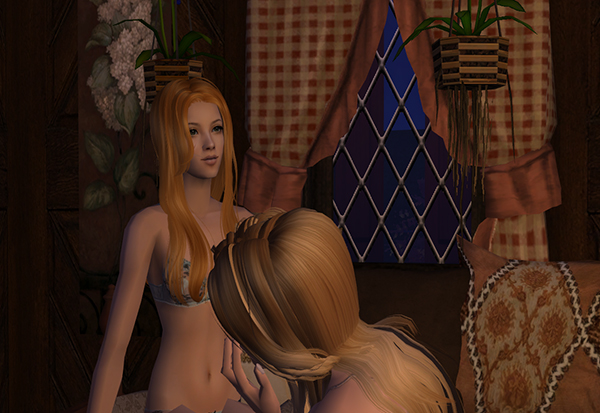 “And really, if it weren’t gonna make things complicated between you two, which is nothing new, not really, would you want to go back in time and not sleep with him?” Olivia asked.

“Was he that bad? I mean I would think–you know–not that you can always tell–but. Just, seriously, was he bad?”

“No.” Nessa barely breathed the word and though Olivia had heard it, she wouldn’t be herself if she let an opportunity like this pass her by.

“No. He. No.” Nessa finally repeated at an audible level.

“Was he good then?” Nessa shot her a black look. “Better than Mitch?” 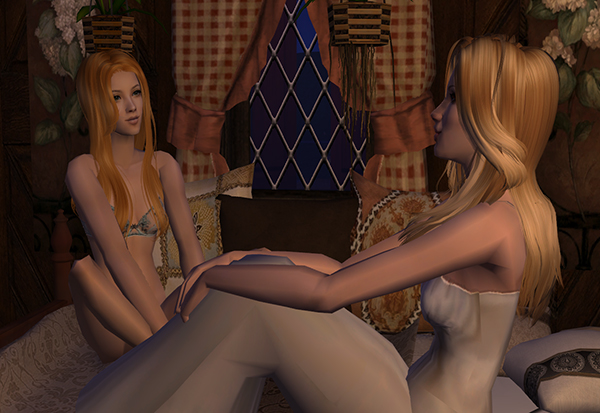 “Mindblowingly better.” Nessa was blushed a charming shade of eggplant.

“See! Go back in time and change the bad sex, not the mindblowing stuff.” Olivia said with a chuckle as Nessa buried her face in her hands. “I’ll let you smack me for that if you can tell me you’re not hiding laughter at all.”

“I can’t.” Came the muffled reply. Good. There were so many things that Nessa hated herself for that Olivia just would not let her hate herself for this. There were a lot of things that deserved angst. Sex with a hot guy that you really, really liked, unless there was a reason that you really, really shouldn’t be with him, wasn’t one of them. Olivia shook her head. Too bad there wasn’t a Crestian who did hit her chimes, she could use a little mindblowing sex. The last time she’d been in bed with someone was with Justin–and that certainly was nothing to write home about.

“Livvie?” Nessa asked. Olivia blinked and looked at her. “Is something wrong?”

“Nah, this is your existential crisis.” Olivia said. “I’m supposed to be cheering you up and telling you to not get all emo over sex with a hot guy, not drag you down.”

“Turn about is fair play.” Nessa said in a prim schoolteacher voice that started Olivia giggling, which started Nessa giggling until they both looked sharply at the wall that separated Olivia’s room from Jarrett’s and clamped their hands over their mouths. “If you want to talk about it, I wanna hear.” 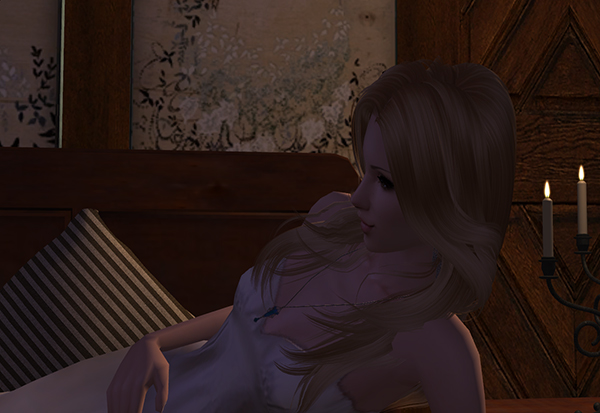 “Oh, I was just thinking I could use a little sex that the word mindblowing featured in without the suffix ly and the adjective bad attached to it.” Olivia batted her lashes. Nessa giggled again then glanced at the wall.

“So you were thinking about Justin?”

“He does kinda attach himself to sex–and not in a good way.” Olivia shrugged. “Reason six thousand and ninety three why I never should have married him.” Nessa nodded in understanding.

“I’m definitely test driving the next one before I put a ring on it.” Olivia said with a shrug. “Which you could look at your little adventure tonight as a test drive, you know, take it around the block a couple of times before you park it in your garage.”

“I’m tired.” Olivia pointed out. “My mind’s kinda stuck in the gutter anyway, and any checks and balances I have on my mouth clock out about the time I put a nightie on.”Nessa blushed. 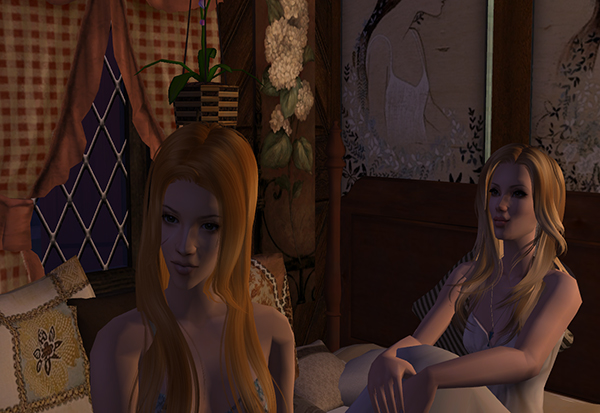 “Don’t be. Hey, as my favorite coffee cup said “Being a friend isn’t about being there when it’s convenient, it’s about being there when it isn’t.” I don’t want you to think you can’t come sit on my bed and bitch about hot sex until the cows come home, no matter what time of the night it is.” Olivia said. “Just don’t get pissed if my mind’s one track–and that track is to Guttersville.”

“I’ll let you get some sleep.” Nessa slid off the bed and took a few steps toward the door.

“Thanks, Ness. You get some too. Don’t just go lay in your room and stare at the ceiling and feel guilty.” Olivia commanded as she slipped under the comforter.

“Livvie?” Nessa hesitated, turning around to look at her. 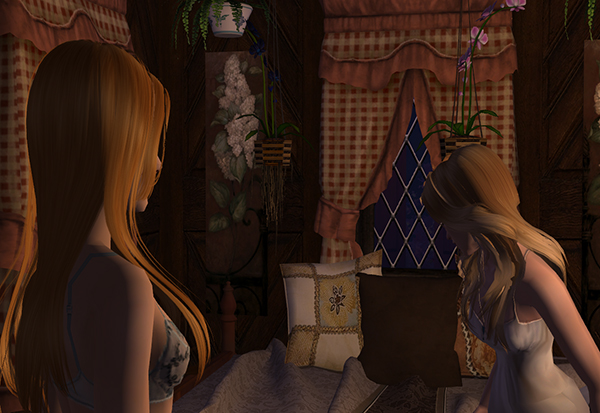 “Can–can I stay with you tonight?” Nessa asked, twisting her fingers again.

“Well, I’m not as hot as the last person you were in bed with tonight, but if you want to. Just shove those pillows over.” Nessa nodded and clambered back onto the bed, curling up next to Olivia. 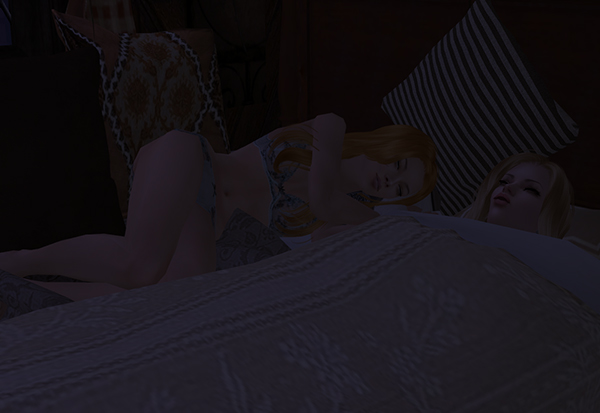 Olivia had almost fallen asleep, was sure that Nessa was asleep, when she heard the other woman whisper. “Thank you, Livvie.”

4 Responses to For the Night