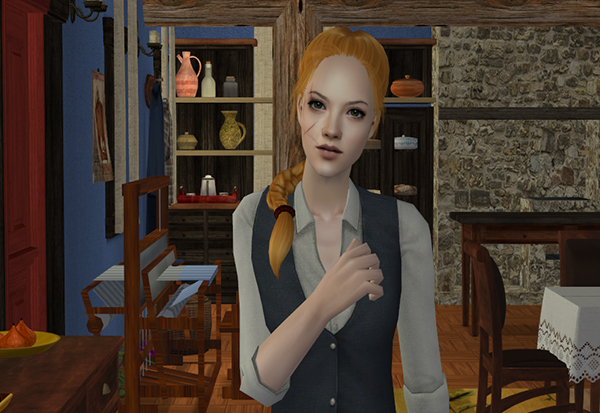 Nessa wouldn’t be surprised if she soon looked down at the floor and found herself walking in a trench. It was just that the king had told her that he’d be by, today–this morning–sometime with Master Jarrett. Oooh. She pressed a hand against her stomach and waited for the ache to pass. She tried to tell herself that Sawyer adored Jarrett, and she could tell that darn near everyone was fond of him. Well, Lord Gray didn’t seem that impressed, but if Lord Gray could tell his ass from his elbow it was probably sheer coincidence.

She supposed Alistair didn’t either, but Alistair liked one person Shadowcrest and he saw him in the mirror, you couldn’t really trust an asshat like that. She pressed her palm against her stomach again. Really? She’d managed to trust Mitch for–ugh. She pounded her fist against her forehead. Stupid, stupid, stupid. Kian’s voice washed over her. He doesn’t have any power over you, Nessa. You’re free from him. You never have to go back.

Was it sad that she still clung to the sound of his voice? Maybe she’d only hear Mitch in dreams–well, nightmares, in her own head she could call a spade a spade–but she’d only hear Kian’s in her dreams too. She leaned her head against the cool plaster wall and heard a little choking sound. God, she missed him. What else could you do when you lost the only angel you ever knew?

Funny to imagine a guy with a funny drawl, tight black wranglers with a Copenhagen ring and a battered old hat as an angel. But if there were such things, and Nessa believed there were, he was one. 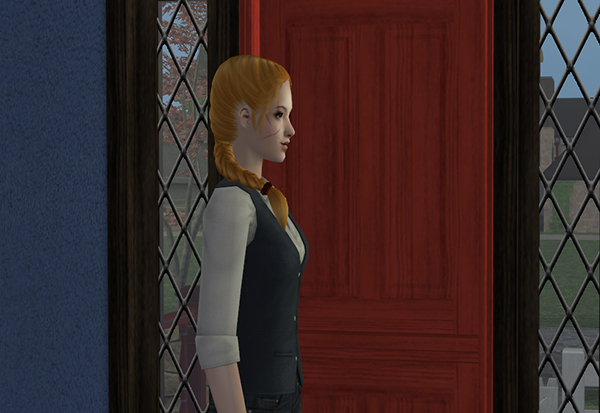 She went and peeked out the window again. The leaded glass was warm from the spring sunlight and comforting. Except, as her stomach dropped again, this time she saw something–something other than just the church or the cemetery, or the hills. 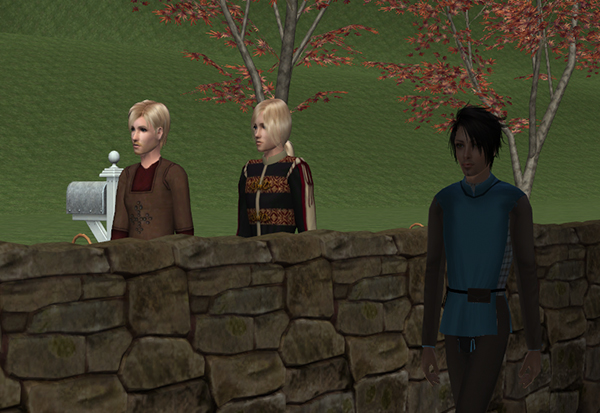 Sawyer was easy to pick out, walking along the top of the stone fence before hopping down into the yard, one of his companions also easy to pick out. The king. The third, blonde, brown leather clothes. That must be–ugh–she pressed her hand against her stomach holding it to the count of ten then she fumbled with the door and walked out. 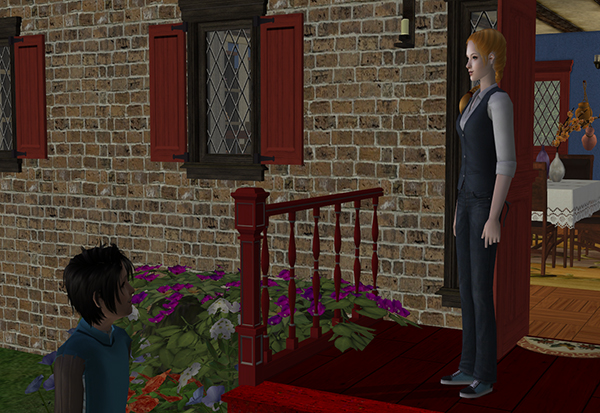 “Morning, Nessa!” Sawyer grinned up at her. She caught her hand before she could press it against her stomach again and smiled back. He was a good kid, even reminded her a little of Kian. They had the same black hair, though Kian’s was always kept short and neat.

“Lady Nessa.” King Lachlan said, mounting the steps. “I hope we didn’t keep you waiting, there were half a dozen minor crises that demanded my attention this morning. None of which could wait.” 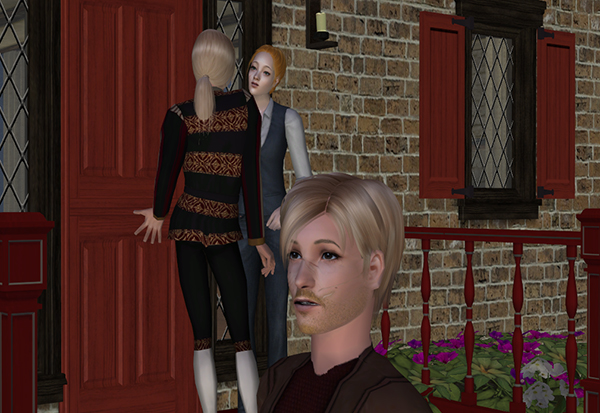 “Oh, no, I kept myself occupied.” Nessa said. Wearing a moat into the new parquet floor. “Nothing serious, I hope?” She couldn’t keep her eyes from wandering past the king’s shoulder toward Master Jarrett. He didn’t–he didn’t really look how she expected. Those sad, very dark eyes wandering around the street, rather like her own seemed to wander.

“Well, c-come in, won’t you?” She asked, unable to keep the small stammer out of her voice. Mitch was screaming in her head–what an idiot she was–how stupid, the house was supposed to be for Jarrett, they were–they were just letting her live there and here she was pretending like it was hers. Like she had the right to invite them in. Nessa turned to the door, closing her eyes briefly before fumbling with the door handle. 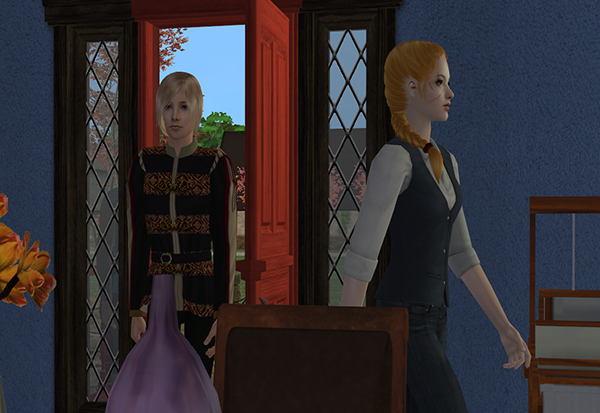 She could feel the eyes on her back and took a deep breath, releasing it slowly so with luck no one would see that she had taken it. She pushed the door open and walked in. Toward the kitchen, hopefully that would, hopefully that would put her out of the way, before turning and watching the three men unable to keep the quiver out of her hands and needs, and hoping they didn’t notice how much like a mouse she felt, cornered by cats. She wasn’t cornered, there was another door, she could get out. There was no reason to feel trapped. 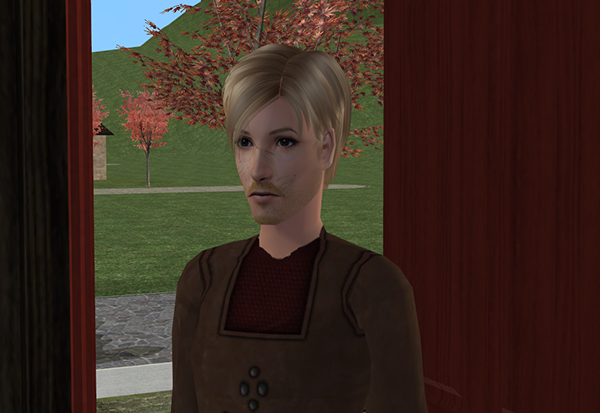 “Can-can I get you anything, tea? Um,” She thought hard about what else there was to offer. Did you offer a king tea? Her eyes shot past the king though, toward Master Jarrett, trying to gauge his reaction. He was a disgustingly unreadable man. She couldn’t tell anything about what he was thinking. That was good, though, maybe? Mitch, you could always tell. She felt a mewl crawling up her throat throttled it back.

“While tea sounds lovely, I’m afraid I don’t feel I can stay.” King Lachlan was watching her with a measured look. He hesitated, so she wasn’t sure what passed over her face. “Unless–,” he took a step toward her. Her stomach flipped and shivered and she held herself very still, fighting every instinct to back away, perhaps run for the door.

“No, I’m–it’s fine.” Nessa said glancing at the flower arrangement on the table rather than the king.

“Well, if you’re sure.” The King said, his voice still uncertain. 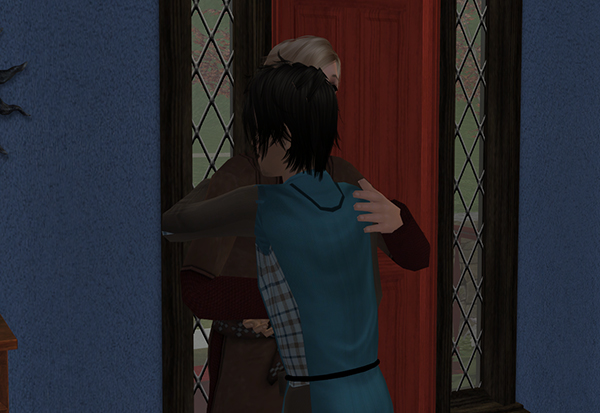 “I told Blake I’d help him with these beams this afternoon.” Sawyer said looking uncertainly between Jarrett and Nessa.

“Then you’d best be off.” Jarrett said, his voice was deep and very quiet. “Don’t forget to take lunch this time.”

The sound of the door shutting seemed very loud, leaving Nessa alone with Jarrett. Everyone said that it wouldn’t be a problem for the two of them to share a house. That Nessa needed to get out of the barn and so did Jarrett. The house had three bedrooms, oh it had all seemed quite logical while everyone else was saying it, but Nessa had never found herself so badly wanting to be back in the stall next to Brick-the-fat-plow-horse and across from Daisy-the-cow in her life as she did watching Master Jarrett.

He turned and looked around the room, looking at the little touches that Raquel and Peyton had helped her put together, put up. Nessa bit her tongue and tried not to apologize immediately when he said nothing. 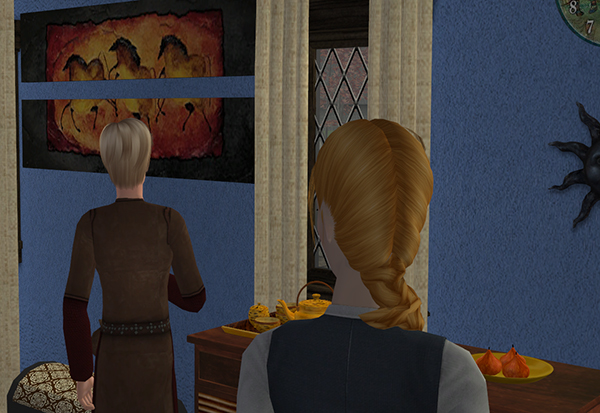 “So you like horses?” He asked, looking at a southwestern print of galloping horses. It was very like one she had admired in this bar in Phoenix that they sometimes stopped in when she had still be on the circuit. Nessa had no idea how they had come by it, how they’d even known she’d like it.

“Not as much as I–once did.” She heard herself admit. “But I still think they’re beautiful.” Master Jarrett turned those dark eyes toward her and her breath hissed between her teeth. I don’t even know what I’ll say if he asks. The truth was out of the question. But he didn’t ask. 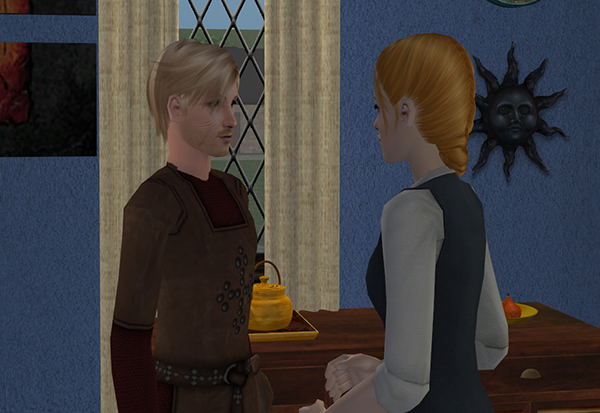 “Would you like me to show you to your room?” She asked. She didn’t know if he was still supposed to be on bed rest or not. But he had just come off of bedrest and it seemed like something to say. He looked at her for a long moment before nodding. 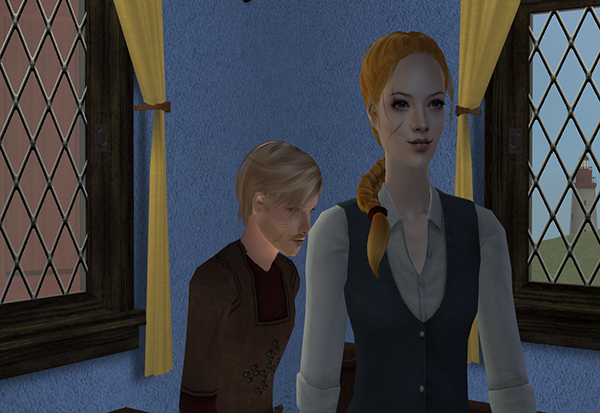 Nessa tried not to scuttle, like a crab, but feeling Jarrett’s eyes on her back made her stomach clench and turn all sorts of unnatural directions.

He looked around the upper hall at the various doors and she nodded at one, letting him lead the way into it. It was just a basic room, the personalization mostly in the wall treatment, nothing much more than a double bed, a window seat, an armoire, a wash bowl and a nightstand. 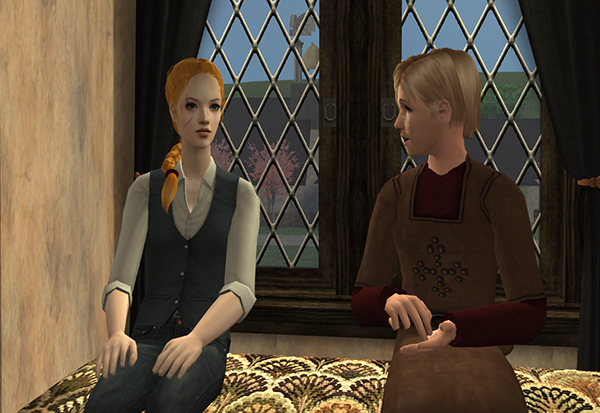 “Are you sure you wouldn’t like this room?”Jarrett asked, sitting on the window seat. He patted the cushion beside him, in indication for her to sit. Which she did, warily. He didn’t seem like she should need to be cautious, but you never could tell…

“Is something wrong with it?” She asked.

“I suppose not.” Jarrett said staring for a moment at the bed. “I just…” He trailed off and glanced at her. 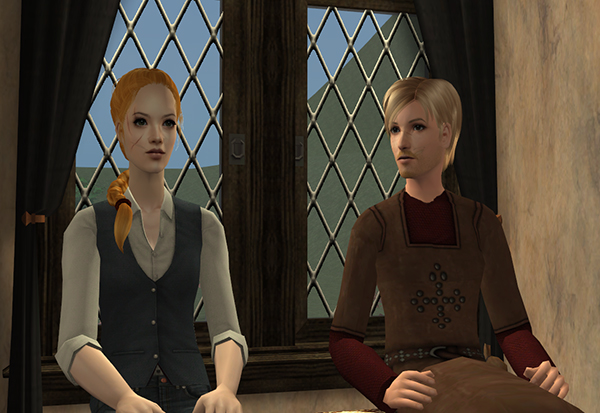 “I’m kind of already set up in the other room. Tiffany–well, Tiffany told me that I was staying here cause a barn was no place for a lady. I don’t know why she was so upset about it. I like animals far more than I like most of the people I know.” She slumped, realizing just how that sounded. But Master Jarrett didn’t do anything more than chuckle.

“I’ll let you get settled.” She said. “I turned the dirt for the garden yesterday, but I haven’t gotten anything planted yet.” Nessa slipped off the cushion.

“I can help.” Master Jarrett offered her a smile. It was a faint smile, one that was, to her eyes, full of sadness and pain, but it was a smile. 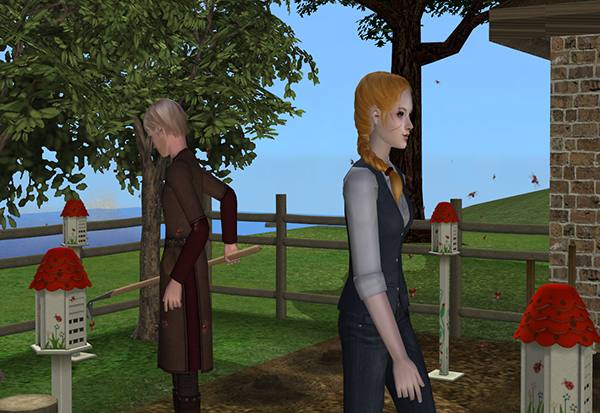 Help apparently meant something different to Jarrett than it had meant to Mitch. When Mitch said he’d help, mostly that meant he’d stand around with a beer and watch her and tell her she was doing it wrong. Jarrett worked at planting the seedlings as Nessa poured the fertilizer over the turned up ground. 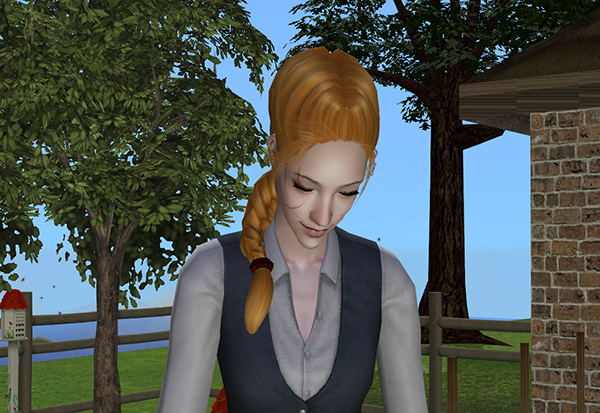 It was weird. Not hearing insults or how she did things wrong. There was mostly just quiet, but not a looming storm sort of it. She could actually almost relax in the warm light. 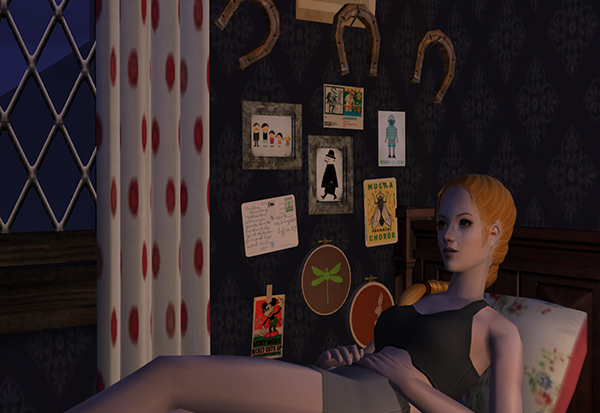 All in all it was a strange day, she thought as she settled in to bed that night. Her fingers laced over the scars on her stomach. Lightly tracing them for the familiarity of it. The house was utterly silent except a faint rustle from the overhead thatch. Her eyes went over the walls, the horseshoes hung over the bed, the post cards. It was kind of scary to think that this was her life now. But she couldn’t deny it was better, probably better than since Mitch had made his way into it seven years earlier.

Whether his specter would ever go, she didn’t know, but as tiredness crept into her bones, she couldn’t help but cast one last thought upward. Kian, if you can–please don’t let me dream tonight.

6 Responses to When You Dream