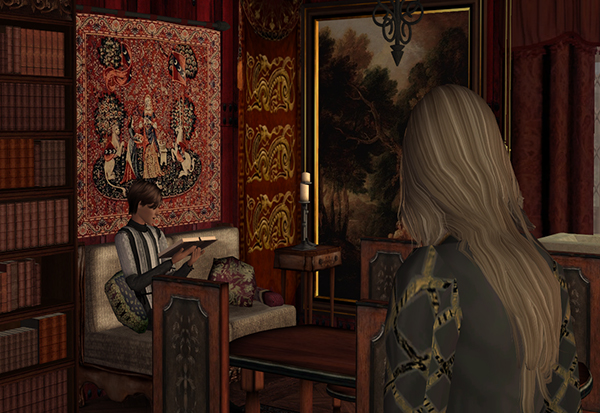 “One, two, three, four, five.” As this was the seventh time in two pages Dolph had uttered this particular set of numbers, Camden looked up from his page. “What are you doing?”

“Pacing.” Camden’s eyebrow arched upward. “I’m waiting for Lady Peyton.” Camden could have understood (sort of) if Dolph were pacing while waiting for Lady Heidi, but as far as Camden knew, Lady Peyton was involved with the blacksmith and quite happy to be and Dolph was still head over heels for Lady Heidi. That meant unless things had drastically changed, the only reasons that Dolph would be meeting with Lady Peyton were completely mundane things, like new cups. And who would pace over a new tea pot. 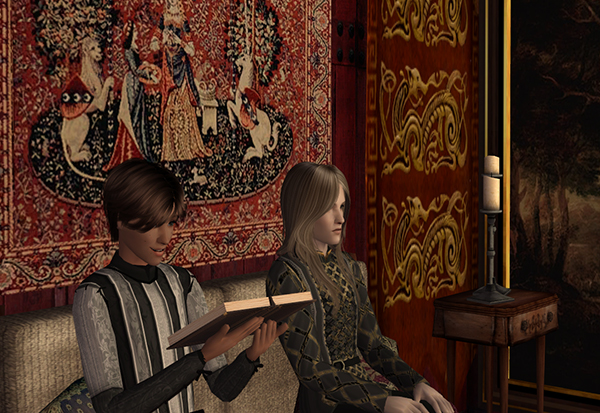 Dolph stopped pacing and flung himself down on the settee. “Don’t look at me like that. It’s–complicated.” Camden looked at his friend.

“I want to–ask Heidi to marry me.” Dolph admitted, his cheeks taking on a flush of pink.

“What does that have to do with Lady Peyton?” Camden asked, stretching out his long legs.

“The only proposals I’ve had any experience with were a father sitting down with another father and hammering over betrothal agreements. Or a lass saying that she didn’t mind marrying the lad her father had picked for her. I’m fairly certain my previous experiences will not help me out here…” He ran a fingernail over a bit of candle wax that had fallen onto the table next to the settee. “I want to do this right, the way that Heidi would have been asked at her old home.” Dolph paused before adding “Only better.” 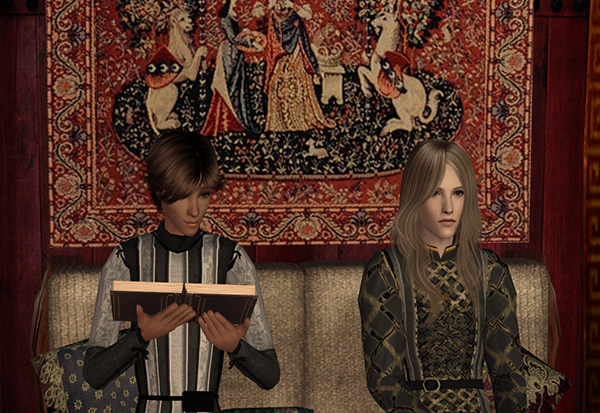 “So, may I ask why you’re asking Lady Peyton?” Camden asked, uncertain why of all of the women who were in Shadowcrest anyone would ask Lady Peyton for advice on proposals. Lady Peyton was a lot of things, a romantic was not one so far as Camden had ever noticed. Lady Jolene, he could see. Even Lady Tiffany, but Lady Peyton? She still wore trews!

As if he had read the thoughts that Camden had not voiced. Dolph slumped back against the cushions. “I don’t want anyone to know I’m asking. A secret is a secret between two, between three it’s in doubt. If I asked Lady Jolene to come here, even with you as chaperone, I’d fear Sawyer’s response. I don’t want to get into a fight with him. Lady Peyton, however, I could be asking her about any number of things.”

“And Master Ren will not get angry?”

“I don’t believe he would.” Dolph said. “There are too many logical explanations for why I might invite Lady Peyton.”

“Please, come in, my lady.” Dolph called back. 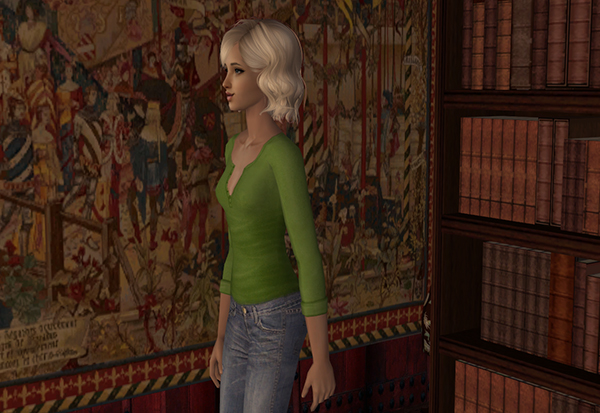 “I hope you don’t mind, I brought company.” Dolph and Camden exchanged a glance, he could see Dolph practically calculating what they needed more of to give this a legitimate feel. 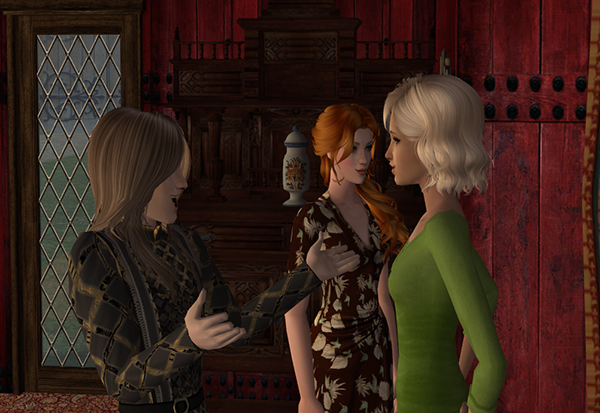 But while the woman who followed Peyton was redheaded, it certainly was not Lady Heidi. Camden couldn’t help but stare for a moment. A bright fall of copper hair tumbled down over her shoulder in loose curls, brilliant green eyes sparkling even in the dim light inside of the house.

“G’afternoon, my lords.” Lady Peyton said. “This is Victoria. It was either bring her with me or leave her to listen to Tiffany’s plans for updating the walkway at the castle. Which she’ll hear about at dinner anyway.” Lady Peyton shrugged and absently swatted at her platinum hair.

“Oh, no, that’s fine.” Dolph said. “Greetings, Lady Victoria. When did you arrive in Shadowcrest?”

“Vikki, this is Lord Dolph and that’s Lord Camden.” She gestured over her shoulder. 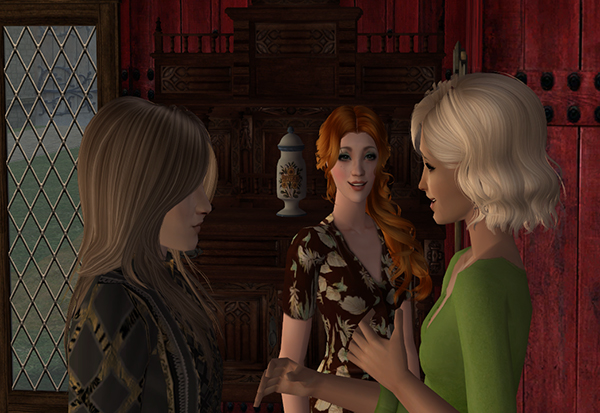 “So, what’s the damage?” Lady Peyton asked as Camden put his book back on the shelf. It would probably be very rude of him to spend the afternoon nose shut into a book.

“Well, given the sick look on your face before you saw Vikki, I imagine you didn’t call me here to talk about plates, so why did you ask me to come by. And it better not be anything untoward or I’ll kick your ass further than Kennedy’s gonna kick Blake’s if he doesn’t either shut up and let Kennedy do her job or produce an MD.”

“Oh–of course. No, uh, I wish to propose to Lady Heidi. And I was–hoping that you might, perhaps, have some ideas.” Lady Peyton looked around the room.”What, may I ask, are you looking for, my lady?”

“The cosmic bunnyhole I’ve fallen down… again.” Lady Peyton said, Lady Victoria pressed her hand against her mouth and giggled. “Who in the name of Peter Pan’s floating panties would ask me for proposal advice?”

Dolph looked at Camden and mouthed “Peter Pan’s floating panties?” Camden could only shrug. He had no idea what she meant by that.

“Well, you at least know what Heidi would be familiar with, or perhaps, what she might wish for in a proposal?” Dolph said, sounding small and yet hopeful.

“Well, I guess I could run through some old rom-coms and see what I can pull out of my butt.” Peyton said. “Although personally, I was more a fan of shit blowing up.”

“But you can quote Casablanca perfectly, Pey.” Lady Victoria interjected with a laugh. 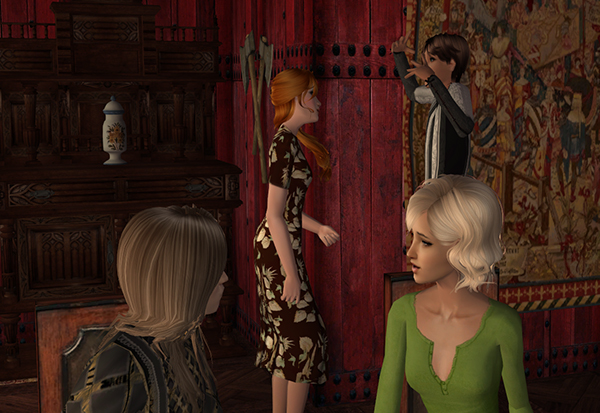 “Well if we’re gonna think about something as dreadful as romantic proposals, perhaps we should sit down. Might as well not end the day with my feet hurting as not as much as my head.”

“So, Lady Victoria,” Camden said. “How are you liking Shadowcrest so far?”

“Well, it certainly is different and when I saw the bathroom I almost cried, but I imagine that I’ll get used to it.” Lady Victoria said. Why was it that the bathing room was always one of the first things that the ladies commented on. A bathhouse was a bathhouse, wasn’t it?

“Is there anything romantic around here?” Lady Peyton asked.

“Has Master Ren not taken you to romantic places?” Dolph asked.

“Um, I don’t know that what I would think of as romantic is quite what Heidi thinks of as romantic. I mean we sometimes go down to the lake and skip rocks and fish. But I somehow don’t see Heidi find that romantic. Venice or the Eiffel Tower  it’s not.” Lady Peyton said. 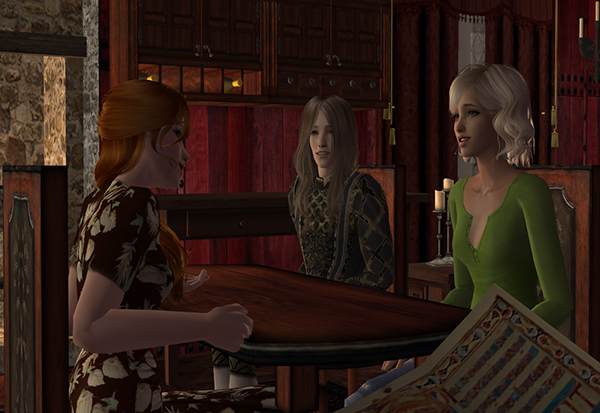 “Well, what about a meadow?” Lady Victoria offered. Lady Peyton turned and looked over her shoulder. “You know something with trees and flowers and butterflies. Most women find that romantic.” She pulled out the chair across from Lady Peyton and sat down. Camden sat back down on the settee and picked up his book, though it was hard to concentrate on the words on the page. 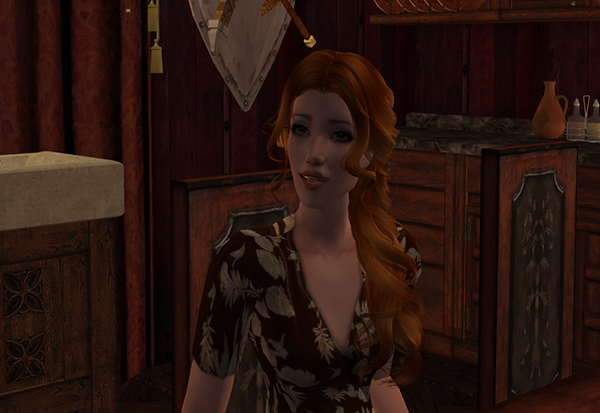 What’s gotten into me, you’d think I was Sawyer. He thought, as he watched Lady Victoria talk, the animated way her hands moved and her eyes sparkled. 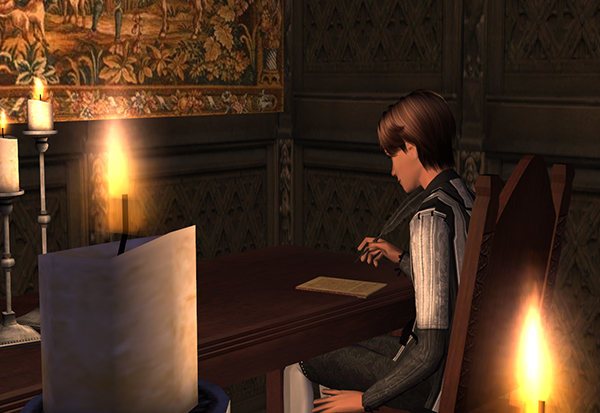 Still as he settled in that evening, after Dolph had made his plans and Lady Peyton and Lady Victoria had left for the evening, though he heard the conversation, and ostensibly had read twenty pages in his book, he couldn’t remember a word of what Dolph had said, nor a letter in those twenty pages. 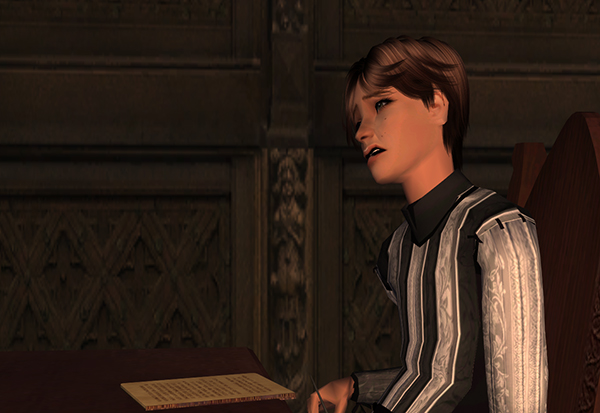 He could, however, remember exactly the way the candlelight flickered off Lady Victoria’s hair, the way she flicked an errant strand back from her face. He tapped a quill on the treatise that King Lachlan had asked him to scan over, but his mind wasn’t on that either. 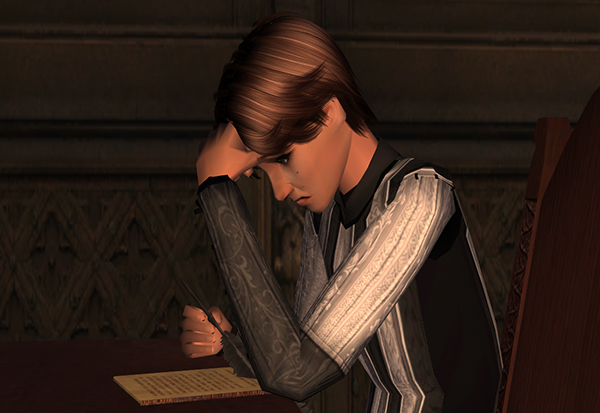 Instead he raised his eyes to the candles on the desk, the slow, almost lazy, way the wax slid down the side and thought of green eyes and a slow, steady hum, like that electricity that Lady Peyton sometimes talked about that seemed coursing through him.

6 Responses to Today I Met