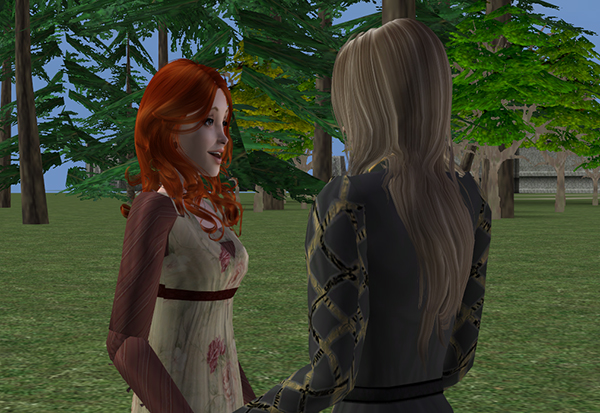 “What are we doing here?” Heidi asked. Here was a break in the trees before the land evened out into cleared pasture and farmland, a brisk walk from the city gates. There was nothing, from her vantage point that would point to why they were here.

“We’ve been spending too much time inside, you’ve been closeted with the King three days this week, if I were a jealous man–and if I didn’t know that the king had received his first tentative diplomatic missive from King Robard of Archerglen–I’d wonder if there were something going on there.” Dolph smiled, though he seemed to peer at her a bit cautiously. He didn’t have any idea why Heidi was closeted with Lachlan, and unfortunately for the both of them, Heidi wasn’t supposed to say.

“Eh, it was something that I sometimes dealt with in my previous job.” Heidi demurred. “Sometimes.” Not exactly the truth but not exactly a lie either. She hated the not being able to tell people, the constantly hiding things. It was one of the reasons that she had never really been involved with anyone before she had come to Shadowcrest, there just was too much that she couldn’t tell people.

Jolene understood, or at least she understood the reticence as something she’d dealt with on the force. Maybe that was why there had been the distance between her and Peyton too. Because Peyton was pretty much an open book, her parents might have both been practiced liars, both being lawyers, but that was different than the sort of lying that Heidi did. The sort of lying Peyton was used to was just words and feelings.

The sort that Heidi did involved… everything. Pulling on a new personality at every new situation. Although, if she was going to be honest with herself, she doubted that was all there was to it. She knew that she’d hurt Peyton’s feelings when she’d gone to Lock back in the winter and there was no way that she could make that up to her.

It was what Lock had told her to do. To pay attention to the other girls and to tell him when they were unhappy, not that that absolved her either. But whatever it was, Heidi was just as glad that Peyton was getting along so well with Victoria. It didn’t make the breach of trust go away, but maybe it would make it enough less immediate that they could resolve it eventually.

Dolph was nodding understandingly. He knew that she had worked for “the government” before she’d come to Shadowcrest, he probably thought that she had been some sort of clerk or aide or something. She smiled as he reached for her hand.

“And I’ve been buried in helping Camden with these military laws. So I thought that we could both use some fresh air.” Dolph finished.

“Isn’t that what windows are for?” Heidi couldn’t pass up the opportunity to tease him, Dolph was so solemn, it worth any lame joke to see him smile at her. 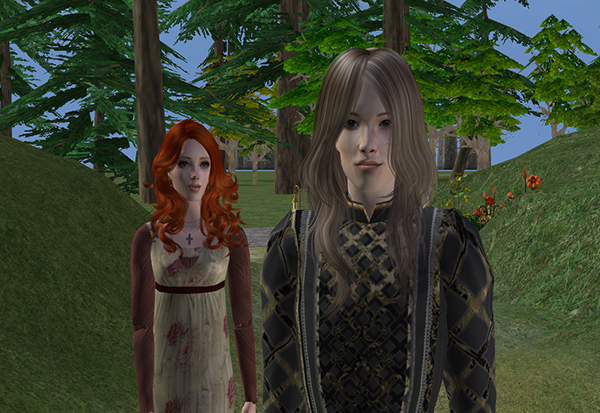 “I’m almost certain you’ll like this better than the view out your window–or even the king’s window.” Dolph said. Heidi followed him down a worn path between two hills and–oh my. He looked over his shoulder anxiously. 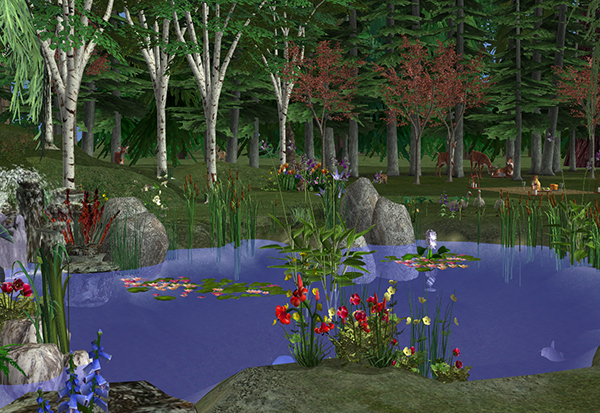 “This is beautiful,” She said looking around the little cup of a pond fed by a waterfall and a small spring, little bursts of color from wildflowers sprinkled here and there like fireworks in the lush green of the meadow. “Do you bring all your ladies here?” She teased.

“Only the ones I really like.” Dolph said with a peculiar half smile. Ones? She thought worriedly. “What?” He asked, his brown eyes turning alarmed. Apparently the thought had shown on her face.

“How many would that be?” She tried to make it sound teasing.

“Well, just you.” He admitted toward his leather half-boot. 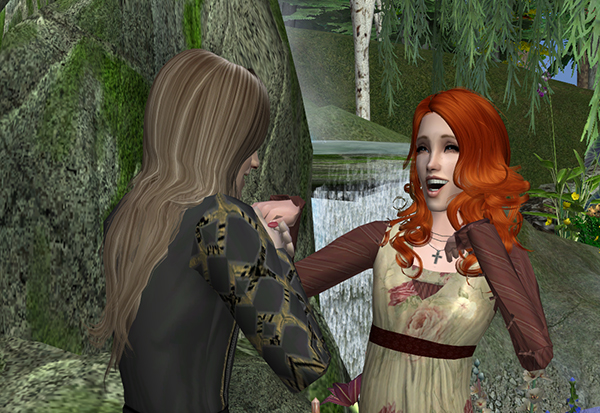 “Oh.” She couldn’t keep the relief out of her voice–and maybe that was for the better because Dolph seemed relieved too. He lifted her hand to press his lips against the back of it.

“Hopefully those crows haven’t picked over the picnic.” Dolph tucked her hand in her elbow and lead her off toward the carpet someone had lain out under a tree. 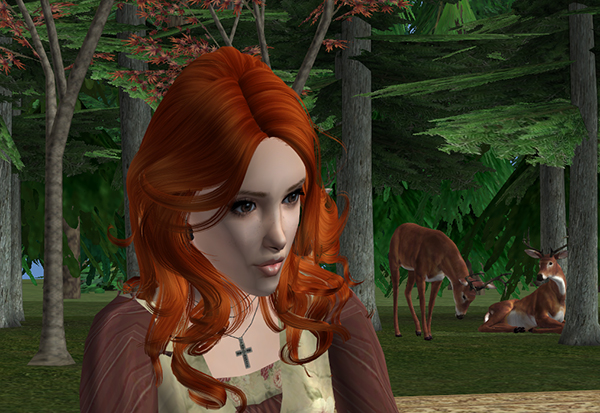 “Don’t think you’re getting off that easily.” Heidi said after nibbling at a few berries. “Weren’t you engaged once? Didn’t you really like her?”

“No. It was a good match for me, and perhaps one for her. Besides I wasn’t exactly engaged. I was a suitor, one of a couple actually. And her father chose to pursue the betrothal with the other suitor.” Dolph picked at a strand of grass. 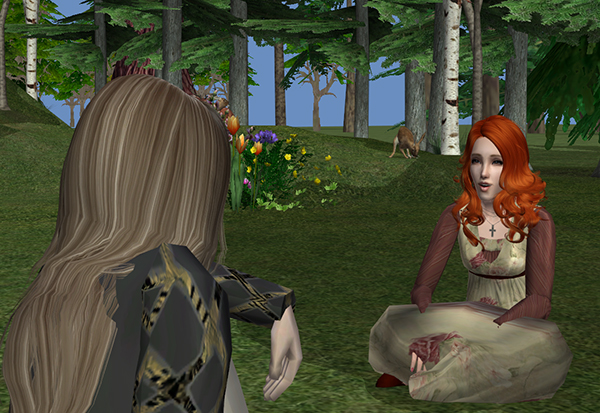 “But didn’t you ever take her out on picnics or anything?” Heidi asked. Wondering why it felt like there was a gulf between the two of them. She couldn’t claim that there was anyone that she’d been serious with since high school, but even she’d been taken out.

“Oh no. It wouldn’t have been proper. We mostly met in the gardens either at Lord Ashby’s estate or on two occasions at the dowager estate where my mother and I lived. Both of which were very closely chaperoned. I think my mother practically denude the estate both of those times.”

Heidi settled back onto her hands. “Why did you grow up on a dowager estate? Isn’t that for cranky old ladies?”

Dolph smiled. “My mother was my father’s second wife. My half brother was twelve or so years older than I was and he very much resented how–quickly–our father remarried. Especially as he already had a son and heir.”

“How quickly?” The question slipped out before she realized that maybe Dolph didn’t want to talk about it. This was probably kind of painful for him.

“He started to court my mother three years after his first wife died.” Dolph traced over the pattern on the carpet with his finger. “It was close to five before they actually married.”

“So five years is quickly?”

“It was to Douglas.” Dolph sighed. “Anyway, our father died when I was eight, Douglas was twenty–and apparently he never lost the animosity to my mother so she and I were shipped off to the dowager estate within a moon of my father’s death. He wasn’t–bad to us. We had only a few servants–but they were good ones, he didn’t stick us with only layabouts. And the house was kept well. Douglas made sure I had tutors and arranged for my apprenticeship.” He shrugged and looked at the trees for a moment. 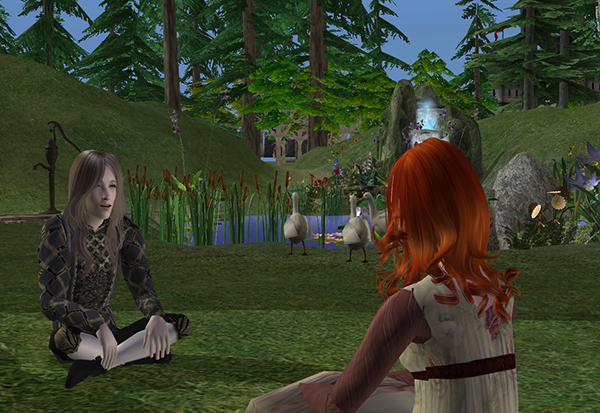 “Still sounds like a jerk to me. It’s not like she married him five days after his first wife died.” Heidi said. “Then again, my mom never remarried after my dad died, maybe I’d have felt different if she had. I was only a little older when my dad died than Douglas was when his mom did.”

“What were your parents like?”Dolph asked. Heidi paused for a moment and thought, a smile poking up at the corner of her lips.

“Oh, my dad was–like a chameleon. He wasn’t around a lot, but he was always there for anything important. Because of his job, he couldn’t always show up as my dad, but he would be the shifty looking guy who slouched in. Or, like for my kindergarten graduation, he came as a photographer, My mom and I had to pretend we didn’t recognize him, but we could always find him.” Heidi sighed. That job. She couldn’t help but be a little bitter about it. Her father had given his job everything he had, including his life, and in repayment, it repaid him with a tainted legacy and whispers. They weren’t true. She’d never believe it.

“My mom was the most practical hopeless romantic in the entire world. She would lose herself in novels and stories of love everlasting, and yet she’d still have dinner on the table at six on the dot. She missed my dad.” Heidi glanced down at her hands.

“I understand. I wasn’t–trying to upset you.” Dolph said. 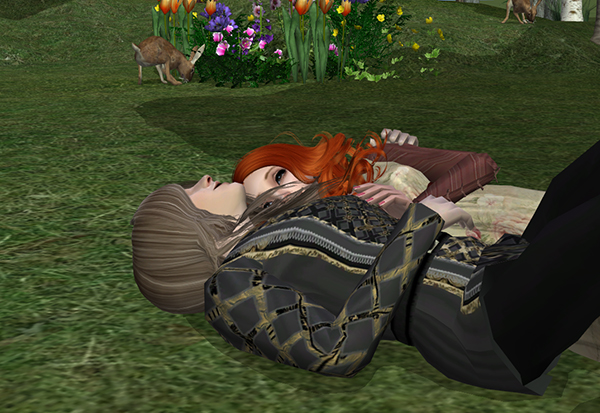 “No, it’s not that. I miss them too is all.”As if that bit of conversation had sucked all the conversing they had in them out, Dolph settled back on the grass and Heidi settled in against his side, her head resting on his arm as it was wrapped around her shoulders. He pointed out clouds and birds, although she would fully admit that she watched Dolph more than the robins, finches, and jays. 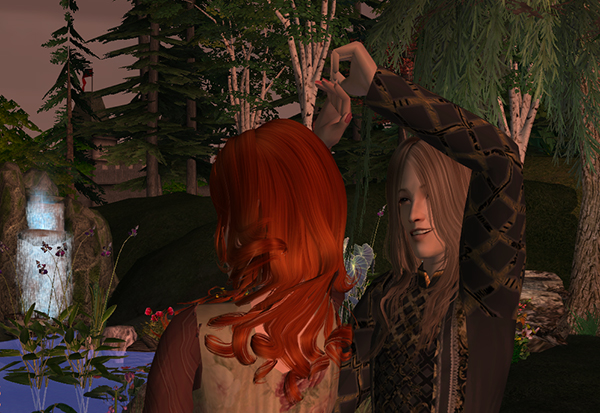 The afternoon did that peculiar crawl-sprint, where it seemed to take forever and yet no time at all. Then dusk was settling in around them.

“Well, I suppose I should get back–someone’s going to think we tripped and fell down a well or something.” Heidi said, squinting at the cruel sun that was receding on what had been a nearly perfect afternoon. 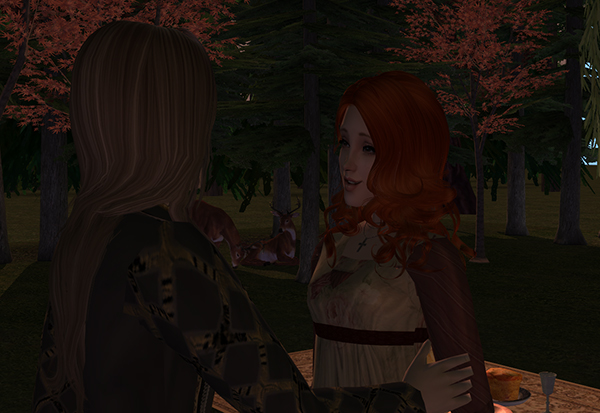 “Hmmm?” Heidi turned back to Dolph who reached into his tunic and pulled something out. Her eyes flew wide. 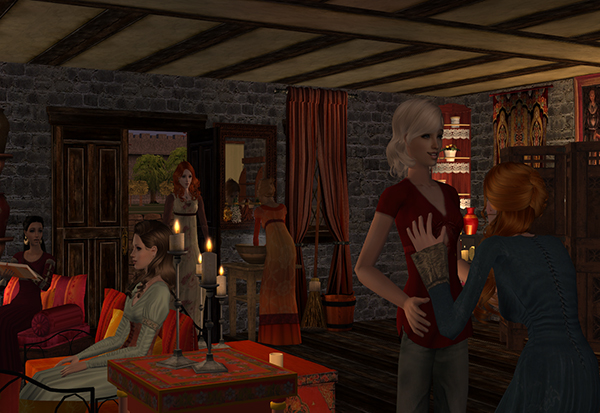 The barn looked about the same as every evening. Tiffany engrossed in a book, Kennedy washing something, Jolene sitting on the sofa probably about to get out an embroidery project or something.

Peyton and Victoria were talking about–well, Heidi had no idea when she skipped into their midst–though she would have sworn that Peyton looked over her shoulder and hid a smirk by turning back to Victoria.

“What are you looking so pleased about?” Jolene asked.

“Other than she escaped work all afternoon.” Peyton said over her shoulder. “Usually that’s Tiff. Tiff actually had to stay here and help garden.”

“And your shoes don’t have the right support for a grown woman to skip.” Kennedy cautioned. 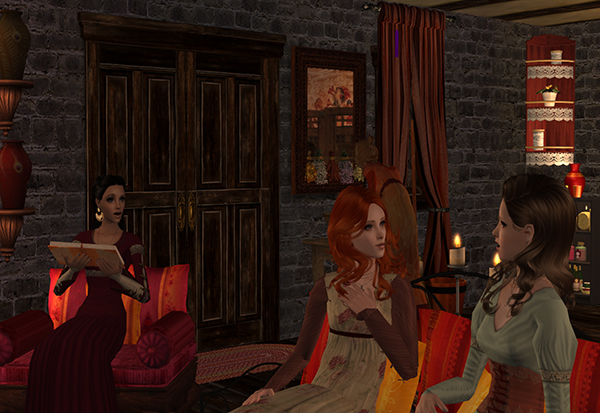 “You are not going to rain on my parade.” Heidi stuck her tongue out at Kennedy and then sat down on the sofa next to Jolene. 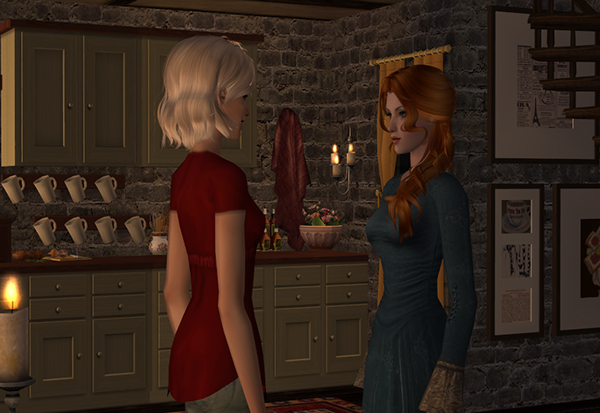 “Notice me not asking if she got laid.” Peyton said to Victoria in a stage whisper. Victoria swatted Peyton on the arm.

“Oh nothing.” Heidi fluffed her hair, the ring that Dolph gave her clearly visible on her hand.

“Ring!” Jolene said grabbing her wrist and jerking it so that she could see the piece of jewelry better. Peyton snickered. 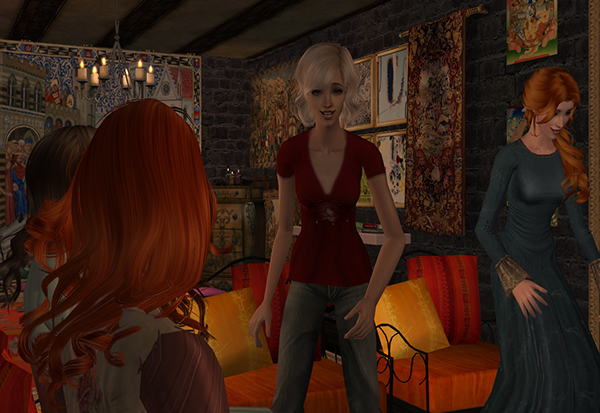 “Seriously, Heidi, that red dye’s getting to your brain. Who’d tell me they were going to propose. Next thing I know you’ll be saying I helped plan the whole thing!” Peyton dismissed airily. 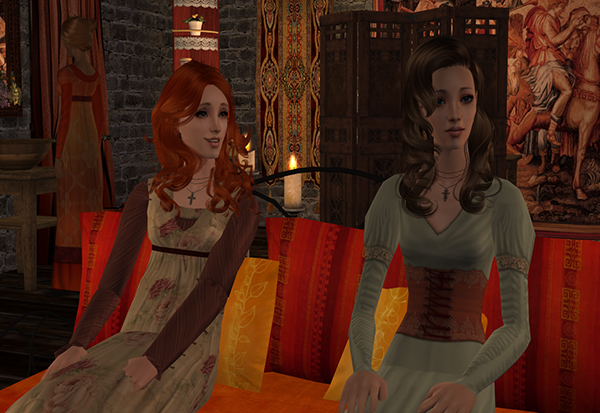 “So spill.” Jolene said, giving up her examination of the ring to stare intently. “I want to know everything!”

10 Responses to Come A Little Closer