Of Frogs and Princes 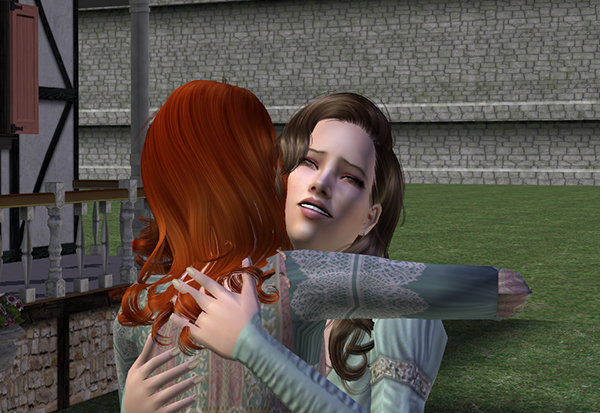 “Why does it feel like I never see you anymore?” Heidi asked giving Jolene a long hug, if for no other reason than to spare herself giving the other woman a long once over. Something was wrong, it was there in the way she held her shoulders in the way that her eyes flickered away whenever Heidi tried to catch them. She couldn’t have screamed wrong more short of investing in a large neon sign.

“Because we spent the better part of eight months as roommates where you saw me everyday and now we only see each other a couple of times a week. You being less than mobile these days.” Jolene waved at Heidi’s midsection.

“I’m pregnant, not dying.” Heidi retorted. “And no one gets all upset about Raquel running all over Shadowcrest and what not.”

“Except Kennedy.” Jolene said and Heidi stifled a snort.

“But Blake doesn’t.” Heidi mused, thinking of how if Dolph had his way, Heidi’d forget how to walk before she had this baby.

“We don’t know that.” Jolene pointed out. Heidi looked at Jolene quizzically. “Aren’t you the one who is always telling me what you see is not always what you get. We see Blake and Raquel’s public faces and have no idea what’s behind their façade.”

“True, but it still looks like not only would Blake lay his shirt down so she could walk over a mud puddle, he’d do it with him still in it. Dolph’s idea is to either get rid of mud puddles or have me carried over them. Or preferably never leave the house when there is such a thing as mud about.” Something passed over Jolene’s face at that.

“Yeah, it’s tough having a guy adore you.” She shook her head. 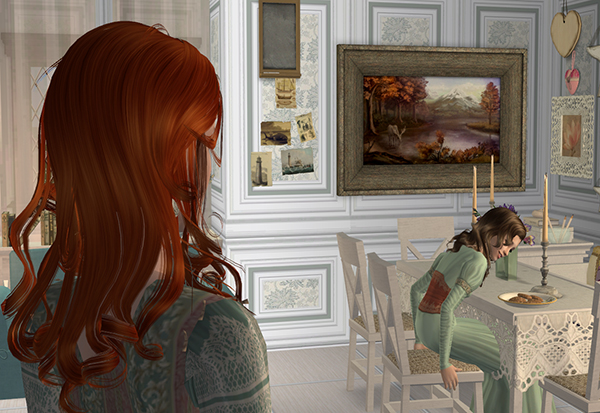 “Well, come in, we don’t need to spend all day out in the front yard.” Heidi shooed her friend into the nook of her kitchen. “Can I get you anything? Tea, milk, water? Ever since Kennedy recommended that I not drink alcohol he’s hidden away every bit of it, so you’d have to go brave him for anything stronger.”

“No, I’m fine. So your lord husband is giving you grief about walking, still?” 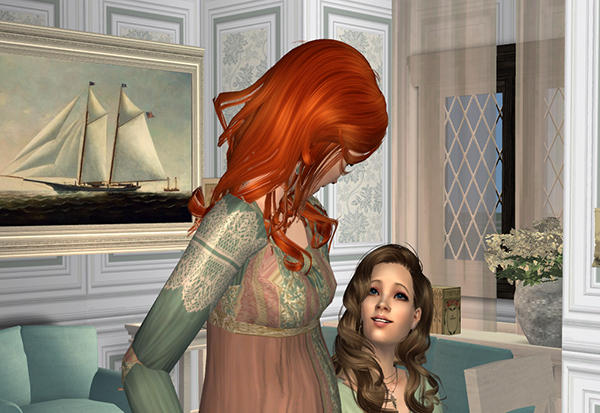 “Yes. And I don’t know why, I mean Raquel’s what two, close to three months ahead of me and you see her all over Shadowcrest.” Heidi shook her head.

“Maybe it’s cause you married a Lord and she married a carpenter.” Jolene offered, with a bitter sigh that caused Heidi to look at her sharply. “Plus, Raquel hardly even looks pregnant.”

“I don’t know that I’d say that.” Heidi murmured in response. 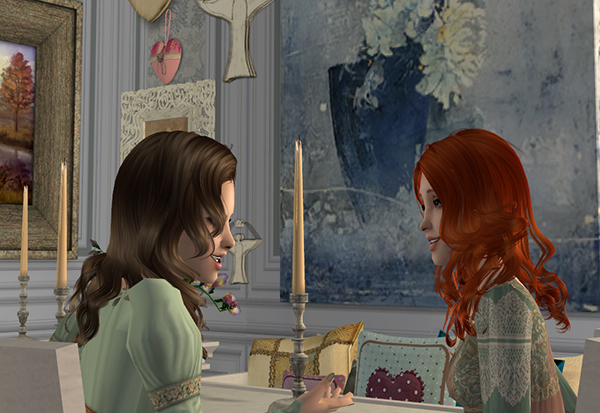 “She looks like a skinny teenager with a basketball stuffed up her dress. You look pregnant.” Before Heidi could think of how to respond to that, Jolene looked around the kitchen and sighed. “I don’t know how you did it. This place is the color of an ice cave and it still seems warm and inviting.” Jolene shook her head. “If I used this color scheme in my house, it’d be like sitting inside an icecube. If, of course, I had a house instead of living with Dr. I never met a riotously bright color I didn’t like Misra.”

“Jo, what’s wrong? Did you have a fight with somebody?” Heidi asked, her concern jumping toward alarmed. 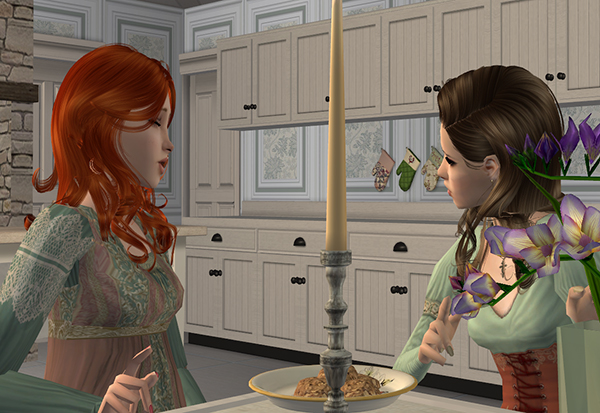 “No. Why do you think something’s wrong, aren’t I always this bitter and unhappy?” Jolene asked.

“No.” Heidi said before letting the silence talk for her. Jolene stood up and walked toward the kitchen doorway, keeping her face turned away. “Jo, c’mon, you can talk to me.” 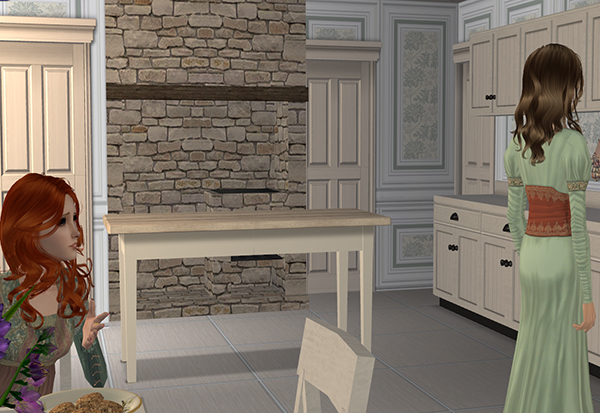 “You wouldn’t understand.” Jolene said barely above a whisper.

“I can’t even try if you won’t tell me.” She pointed out.

“How could you understand, look around this place!” Jolene walked off to the library and threw herself down on the bench with enough force to make Heidi glad it was a very sturdy bench and her body twinge in sympathy. 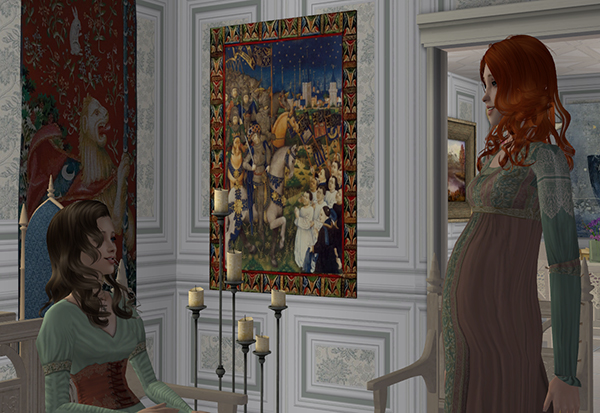 “I guess you’re right cause I don’t understand.” Heidi waddled after Jolene when it was apparent the other woman had moved permanently.

“A good man who loves you, who half literally worships the ground you walk on?”

“A kid, Heidi. A little teenage Romeo who could–couldn’t even do the one thing I wanted him to do right.” Jolene stared at her hands.

“What was that?” Heidi asked, touching one of Jolene’s soft brown curls. 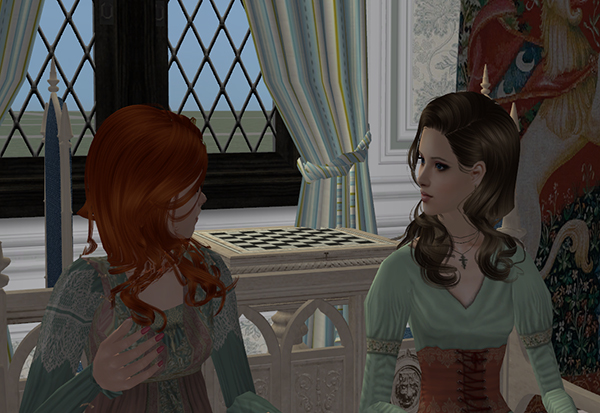 “Fall for someone else… Why did he have to latch onto me and ruin me for everyone else? Why couldn’t he have fallen for Raquel, or Zahrah, or even that little gold digging twit Fiona? Why did he have to fall for me? None of the other guys will even look at me because he wants me. I don’t even get a choice. Either I stay alone or take him.” Jolene said.

“So you really think you’d feel better if there had been some other girl?” Heidi asked.

“Jolene, maybe Sawyer’s not a noble. Maybe he does odd jobs and can’t buy you the biggest nicest house on the block. But he’s a good man with a good heart and he’s given it to you.” Heidi said, her eyes locking on Jolene’s.

“I told you you wouldn’t understand.” Jolene turned away. “He’s a kid.”

“No, Jo, he isn’t. The only way Sawyer is still a kid is in your head.” Heidi took a deep breath and exhaled it slowly so she wouldn’t snap at the other woman. “He’s been on his own for six years, Joey. About as long as you have. Except you had your parents to go home to those first couple of years.”

“Don’t bring my parents into this.” Jolene warned.

“Okay, cause they’re not the point. The point is Sawyer’s only a child because you can attach a number to him. ‘Seventeen’. Which yes, might mean a helluva lot back home, but it means exactly squat here.” Heidi said. 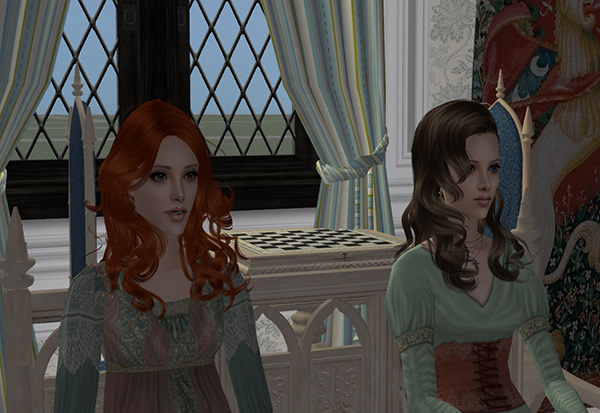 “And then that child rapist came along.” Jolene stared at the fireplace with a heat that practically could have lit the log on it.

“Victoria.” The venom in Jolene’s voice probably would have eaten through solid steel.

“Okay, apparently I missed something else.” Heidi said puzzled.

“What else do you call a woman–a grown woman–older than us–who marries a kid? Do you really think, given how often they’d sit under the tree outside and make-out that they’re really not fucking, Heidi? Don’t tell me you’re that naïve.” Jolene snarled. 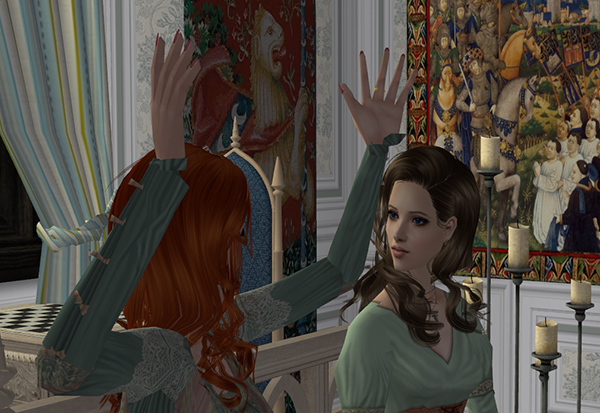 “Oh, Joey. Camden is not a kid. He’s–what–a month now shy of being eighteen? And if you’d ever spent five minutes in his company you’d know he wasn’t a kid. Not in any way except maybe still broadening out in the shoulders. He’s probably more mature and grown up than I am.” And the way things are going in this conversation a helluva lot more grown up than you are. Heidi thought.

“Then why didn’t she just wait the month?” Jolene snarled.

“Maybe because it wasn’t as big a deal to them as it is to you. And I have to say I don’t think it’s any of our business when two consenting adults want to get married. And in Shadowcrest, Camden is an adult, maybe he wouldn’t have been back home, but we’re not back there. We’re here.” Heidi shook her head.

“They made it my business last night.”

“Oh, really? what did you get a call from Camden cause Victoria was abusing him, wouldn’t let him eat his dessert until he finished all his vegetables?” She couldn’t keep the snark out of her voice. Something had to break, otherwise they were going to have a fight and Heidi didn’t want to push her friend away. Maybe Jolene was being a bitch, but no one else was going to figure out what was going on with her. 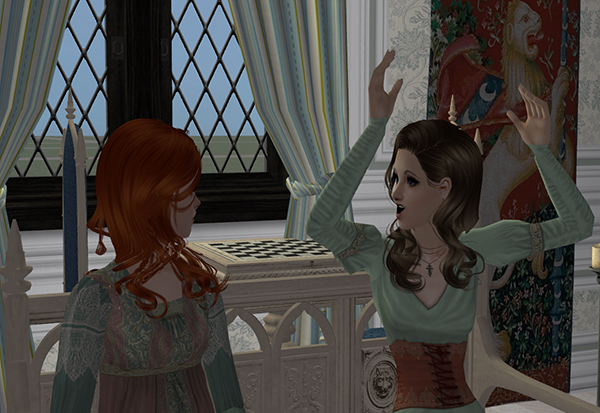 “And this is…” Heidi trailed off unable to even finish. “What did you say?”

“I didn’t.” Jolene said. “I just–I wanted to say no. But I couldn’t. It’s like the words stuck in my throat. I–I tried. But somehow, I just couldn’t say it.”

“Maybe because you knew it wasn’t the right thing to say?” Heidi offered.

“What else could I say?”

“Yes?” If Heidi had grown a second head, the look Jolene gave her then wouldn’t have been any odder.

“Yeah. He loves you, even though you’ve done everything to dissuade him that you could, short of throwing him into bed with every other woman currently in Shadowcrest. And you wouldn’t be near this pissed off and confused if you didn’t love him too.”

“You’ll figure it out, you know, together.” Heidi shrugged and laid a hand on her tummy. “It isn’t like they hand you a manual on your eighteenth birthday that makes everything about love and marriage make sense.” She sure as hell hadn’t gotten one–and obviously neither had Jolene. 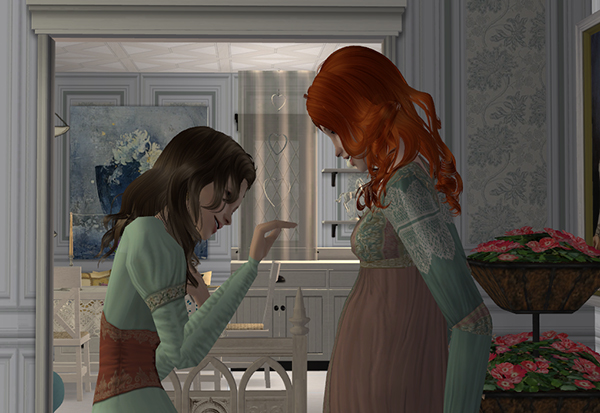 “But…” Jolene broke off with a sigh. “I really should go. I have–I’m sorry.” Heidi nodded and got to her feet. “Bye, little Heidi’s spawn, you’ll be glad some day your mom’s a wise lady.” 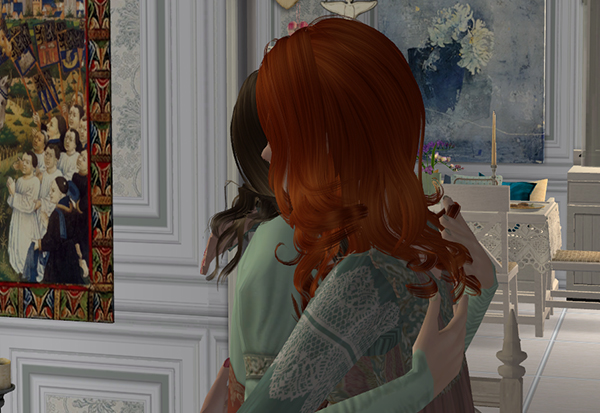 “And bye Spawn’s mom they’ll be lucky to have later.” Jolene said in a whisper after she hugged Heidi.

Heidi scrubbed her hand over her face, near as exhausted as the time she’d gotten caught in a shoot-out. A creak from her right caught her attention, the door to Dolph’s office swinging open. 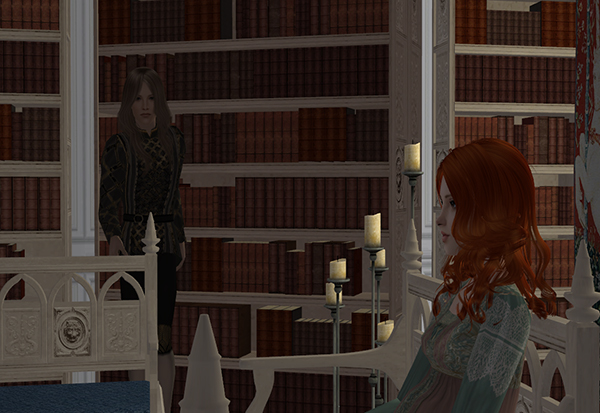 “I love you.” Heidi said, putting a hand on the side of his face as he sat next to her pulling her into his shoulder with a rightness that Heidi hoped more than anything Jolene felt–or would let herself feel about Sawyer.

“I love you too, but what’s wrong–do you need Kennedy?” 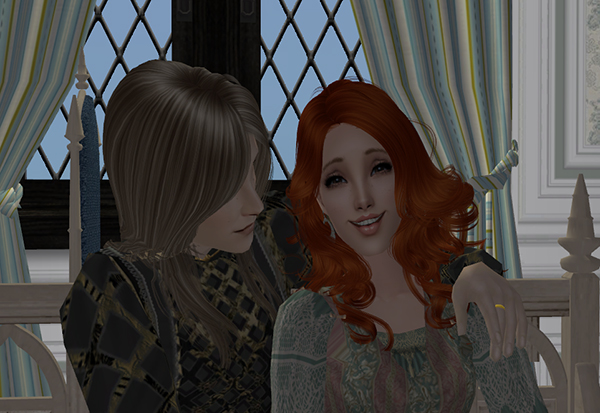 “No. I’m just really lucky I have you.” Heidi said leaning her weight into Dolph’s comforting warmth. “As for what’s wrong–apparently not enough.” She shook her head. Dolph shrugged and shook his before pulling her just a little closer. “I think it’ll sort itself out though. At any rate, it’s nothing we can fix, you and me.”

“Don’t you think I can fix everything?” Dolph murmured into her hair.

Heidi sighed. “I dunno. Can you fix it when the prince doesn’t turn into a frog?”

12 Responses to Of Frogs and Princes